Seal Block Week 7: The Mountain West on a Mission

This week in the Seal Block, we've got the Mountain West conference and we've got our first disqualification. Which of the remaining seven seals will come out on top. Play a game of chess with death and find out!
DQ. UNLV
Now that we're out of the automatic qualifying conferences, we have to impose a rule: branch campus seals are excluded unless they are significantly different from those of the respective main campuses. UNLV's seal is more or less the same as Nevada-Reno's, so we won't see it until we visit the WAC in a couple of weeks. 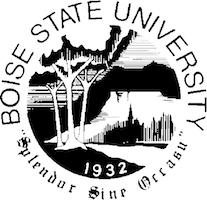 7. Boise State
What it's trying to say: Boise...Bois...French for wood...Woods!
What it's actually saying: "Zagat" says there's a "reason" why "Transylvania University" (either one) didn't use this "design."
Splendor Sine Occasu means "Beauty Without End." The Blog of Unnecessary Quotation Marks would have a field day with applying that motto to the Snake River Plain. Many state schools adopt the motto of the state they are in, but Boise State swiped its motto from a neighboring jurisdiction, British Columbia. This is why the 2010 Olympic B.C. license plates were so obnoxious. 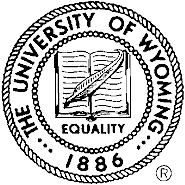 6. Wyoming
What it's trying to say: Equality.
What it's actually saying: Ylitauqe.
I like books with writing in them in university seals, but the quill in Wyoming's book is either writing right-to-left or in boustrophedon. According to Census Bureau estimates, the Jewish population of Wyoming is about 1000, so it's not likely that the book is in Hebrew. There may be more people in Wyoming who know that Minbari is written is boustrophedon, which I believe is the geekiest factoid in existence. 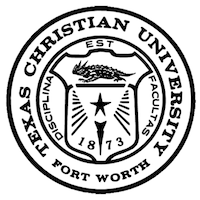 5. TCU
What it's trying to say: We're in Texas, and actually paid some attention to the local wildlife!
What it's actually saying: Let's grill ourselves up some horned frog on the torch o' learning!
This would be in a lot better if the horned frog was located in the coronet instead of on the field. That way it would not look like the torch of learning and star of Texas on the shield were trying to cook the frog. That first sentence would make it look like I know something about heraldry, which I most assuredly do not. 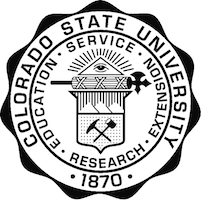 4. Colorado State
What it's trying to say: "The official University seal displays the year of the University's founding establishment, the institution's name since 1957, and the components of its land-grant mission: education, service, extension and research."
What it's actually saying: Tin foil! Get yer tin foil here!
The symbols on the Colorado State seal come from the Great Seal of the State of Colorado and are an all-seeing eye of Providence, a fasces, mountains (OK, understand that one), and a hammer and pick. By converting the full-color state seal to a two-tone, the clarity of the pick is reduced to the point to where it looks like a sickle, thereby completing the conspiracist's set. 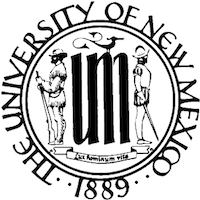 3. New Mexico
What it's trying to say: We salute the heritage of both the Spanish conquistadors and the American frontiersman.
What it's actually saying: Um...
The UNM logo in the center of the seal could use more work so that it's clear there is actually an "N" in there. If this is a duel, our money's on the dude with the rifle. If this is a buddy comedy, it was Almost Heroes and it sucked because Chris Farley died. 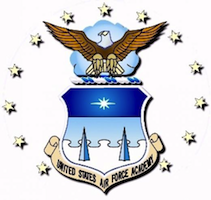 2. Air Force
What it's trying to say: To the skies, America!
What it's actually saying: See all this white space? It's because by the time you graduate, you'll be piloting UAVs from the ground.
Military symbolism and heraldry is a different style than that of academia. Fun heraldic facts: the technical term for the position that an animal is in on a coat of arms is called its "attitude." With Air Force, because the eagle's head is dexter (i.e. turned to the right), and its wings are "displayed" and "elevated," it is an eagle "rising." Before you conclude that the USAFA planned it that way as a perfect symbol of its mission, eagles are always shown rising in heraldry, at least for the past 1000 years.
The seal is slightly off as a coat of arms because there are no animals on the left and right side of the shield. A pair of griffins segreant would probably work best, because they have wings too. This concludes my knowledge of heraldry: consult Wikipedia for five minutes and you will be as knowledgeable as me. 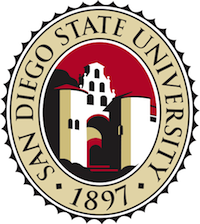 1. San Diego State
What it's trying to say: It's our mission to provide knowledge to the natives. No, not like that.
What it's actually saying: Don't expect brand-new, cutting-edge, educational facilitiies!
Whew, my mother-in-law's school won the Mountain West. No awkward Thanksgiving or Christmas conversations!
While there is a mission-style architecture, the individual Spanish missions along the California coast do not have identical plans and thus are unique symbols of each cities. The city's mission is frequently used in the seals of schools in the Cal State system. The Mission San Diego de Alcalá (or, if you're J.T. O'Sullivan, Spanish Saint Didacus) is the oldest mission in California, and San Diegans are proud of this fact. It also makes a purdy seal.
Conference rankings after Week 7: A lack of quailty seals puts the MWC in last. Can the MAC reverse the tide for non-AQ conferences? Find out next week!
Posted by David at 4:51 PM

I still believe that Boise State's seal was stolen from the 1982 edition of someone's high school literary arts magazine.

I don't disagree with you Craig, but I can't fit in all your jokes. I decided the quotations marks were more worthy of mockery.

Oh David, I agree wholeheartedly with the choice.