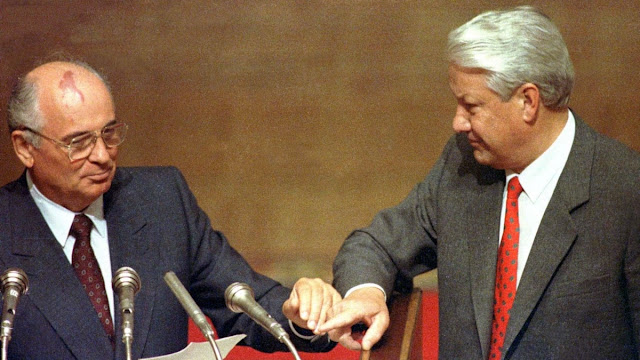 Historical analogies are always imperfect because no two situations are exactly alike.  The fine-grain details differ, even if the contours are generally the same.
With that said, I've been reading a lot this summer about the Gorbachev era and the end of the Soviet Union.
Let me tell you a story: A large empire built on its terrifying ground game finds itself stagnating after the rule of two brief and ineffectual leaders.  In a year ending in 5, a new and energized leader ascends to power and, using a series of slogans and catchphrases, captures the world's attention.  Initial results are strong even if the leader is somewhat polarizing.  After a couple of calamities, the leader is forced to reckon with diminishing returns, all while its superpower rival continues to grow in strength, even through a transition in leadership.  In the end, the leader tries to salvage his reform program, leading to ever-growing discontent within the populace.
On the plus side, the likelihood of a coup, failed or otherwise, inside the program is where this analogy ends.
Due to the nature of Michigan "men" (Michigan man embraces all gender identities) being stereotypical "war dads" who love nothing more than curling up with a good book on some long-ago conflict and sharing our knowledge with others, whether they want to hear it or not, there is a tendency to see Michigan's football program in terms of "empire" and "historical epoch."  It might just be me.  But the reality is, any large enough entity with enough history and enough success will start to follow well-worn paths forward.  Sometimes the cycles are slow and long; sometimes, they are much more compact.  But one of the key elements is that most of these things happen because people are human, and humans are fallible in very predictable ways.
From Michael Dobbs' outstanding Down with Big Brother (p. 310):

"The secrets were stuffed in large envelopes, tied with string, and sealed with wax. There were around two thousand of these envelopes, all neatly filed away in cupboards in the Kremlin apartment once occupied by Stalin, down the corridor from the general secretary's office. This was the celebrated osobaya papka (special file), containing documents so secret that they were circulated and preserved in one copy only. Anybody who checked the documents out was obliged to sign for them. Many of the envelopes in the osobaya papka could be opened only by the general secretary himself or with his personal authorization."

Any sufficiently large organization has secrets.  Dark secrets that they do not want the public to find out.  The nature of secrets, however, is that eventually, they do come to the surface.  The question then is, how do you deal with your past?  Do you confront it?  Do you ignore it?  Do you try to explain it away?
Most organizations tend to ignore for as long as possible, explain it away if plausible, and then when all other options have been exhausted, confront the past.  The threat of legal action usually brings about this cycle and can be a catalyst for accelerating said cycle.
There is a very unpleasant reality that the story of the past of Michigan football has been built on an obscuring of many dark secrets, hidden away for a long time by those in power.  But, like so much of history, especially when the figures in question are dead, the answers and the decisions are unsatisfactory.  But the reality of the story we tell ourselves about ourselves, we cannot flinch when new information comes to light, even if it means reshaping our understanding of the past and of people.
For someone who celebrates the understanding of history to help us understand the present, this may seem like an odd moment to advocate, but perhaps it is time for us to start over again.  This is not to bury the past and pretend it never happened, not in the least.  Rather, it is a chance for us to ask: What could we be if we were not burdened by tradition?  Would we still value the same things because they are who we are in our DNA, or would we choose to move in new directions?  A look at the broader landscape of the moment says that this is an improbable path for Michigan.  There's too much money and too much power wrapped up in the specific version of the past that ignores the new and difficult reality.  That is a shame, but if things broke differently, I would count myself as pleasantly surprised.  But in the end, how the Anderson scandal has played out has shown us that ignoring the reality of the past for as long as possible in favor of the legends is the plan for a majority of those in power.  The shame of this is tremendous but unsurprising.  It is the nature of empire.
There's no neat bow for me to wrap all of this up in.  This is entirely my attempt to unburden my thoughts about where Michigan is and where it is going ahead of this football season.  I frequently said that my best writing came in the seasons where I was looking for some nobility in defeat.  But now, in the part of the year where hope springs eternal, there are just too many of us looking around and wondering what to believe and whether we're just too pessimistic.  We can't know.  But we're going to find out again, together.
Posted by Craig Barker at 7:03 PM No comments: