It's our tenth anniversary year here at HSR, and we made a joke this morning:

We got way more than we deserved! 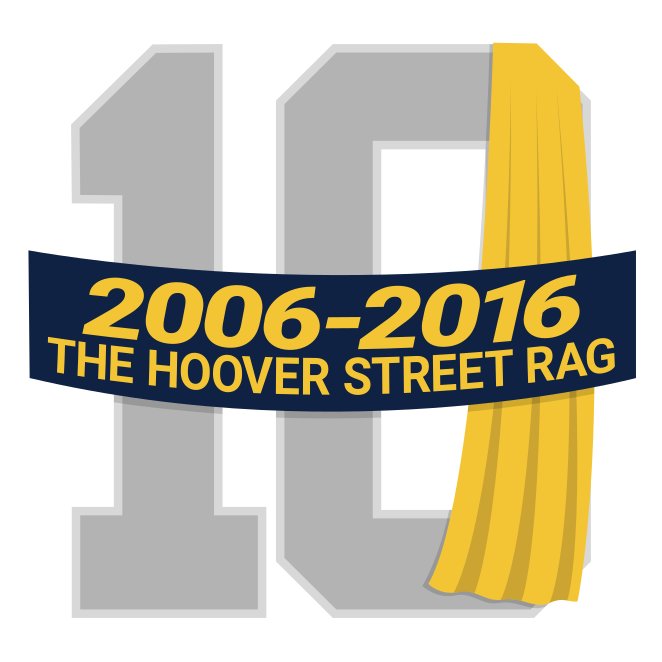 Posted by Craig Barker at 11:11 AM No comments:

We're back!  After yet still another summer of continued Harbaugh, Harbaugh, Harbaugh, we're back with our breakdown of our new playlist for the 2016 season.  We tried to mix it up a bit while following our rules: no more than 80 minutes of music, make every effort not to repeat non-Michigan songs from previous years, and try to capture the mood of the season while driving to Ann Arbor and walking to Michigan Stadium.  With that in mind, here we go:

(Note: It's been a crazy summer.  We did sincerely think about just tossing up The Big Chill soundtrack and calling it a day, but we figured someone would catch it.  That said, there is a vein running through this year's choices.)

1). "It Don't Come Easy" by Ringo Starr
"Forget about the past and all your sorrows
The future won't last
It will soon be over tomorrow."

Last season was great, well, except for a few moments.  But it's in the past.  A new horizon awaits, new memories to be made.  New joys are stretching out before us.

2). "Magic Carpet Ride" by Steppenwolf
"Why don't you tell your dreams to me
Fantasy will set you free."

In honor of the 50th anniversary of Star Trek, the song the accompanied the first warp flight.  It also marks the return of Michigan fans being able to, reasonably, dream big.

3). "Here Comes Your Man" by The Pixies
"There is a wait so long (so long, so long)
You'll never wait so long
Here comes your man."
Harbaugh?  Harbaugh.

4). "Hypnotize" by The Notorious B.I.G.
"Pink gators, my Detroit players."
I mean, the video starts with a trip to Florida.  I also hope that we can collectively start calling the Cass Tech connection "the Pink Gators." OK, you know what, let's not.

Then again, I mean, it all makes sense when you think about it, it's all there. #howbiggieknow?

5). "Heroes" by David Bowie
"We can beat them, forever and ever
Oh, we can be heroes, just for one day."

In honor of the late great Mr. Bowie, my favorite Bowie song (well, this or "Under Pressure").  Some portions of the schedule will feature schools Michigan has handled in the past with great ease.  Others, well, just for one day.

6). "Living in America" by James Brown
"You might have to walk the fine line
You might take the hard line
But everybody's working overtime."

It's Jim Harbaugh's America as this tribute to the hardest working man in college football shows us.  (Also, as we learned in the "30 for 30" on the events of Rocky IV, never perform a five-minute dance routine before you begin your prize fight.)

7).  "Lonely Town" by Brandon Flowers
Brandon Flowers and the Killers remain the unofficial chroniclers of HSR's sincere belief in a new future.

8). "Something Good Can Work" by Two Door Cinema Club
"There's a spanner in the works, you know
You gotta step up your game to make to the top
So go!

Got a little competition now
You're going to find it hard to cope with living on your own now
Uh oh! Uh oh!"

9). "Mess is Mine" by Vance Joy
"You can tell me what you see
I will choose what I believe

There's something appropriate to this for my ten-year "career" as a Michigan football blogger.  I write about Michigan football, Michigan athletics, because of the shared communal experience of it. Not just the highs, but the lows, the frustrations, the near misses.  This mess was yours, now your mess is mine.

10). "Hey Man, Nice Shot" by Filter
"Now that the smoke's gone
And the air is all clear
Those who were right there
Got a new kind of fear"

Jim Harbaugh in one line.

Seven years ago, another program tried to be the silver lining for the state of Michigan.  Time to restore the traditional order of things.

13). "Courage (For Hugh MacLellan)" by The Tragically Hip
"But that night as I drove back to Montreal, I at least discovered this: that there is no simple explanation for anything important any of us do, and that the human tragedy, or the human irony, consists in the necessity of living with the consequences of actions performed under the pressure of compulsions so obscure we do not and cannot understand them.”

― Hugh MacLennan, The Watch that Ends the Night

This one is for me.  Thank you, Gord.
14). "Spectre" by Radiohead
"Futures tricked by the past
Spectre, how he laughs"

The danger of a strong performance in a New Year's Day bowl is that it can be ephemeral.  That team that won won't be the one that takes the field on September 3.  The job of this team will be to show that 41-7 was no fluke.

"Marvin Gaye, 1972, Trouble Man soundtrack.  Everything you missed, jammed into one album."  How right you are, Sam.
16). "Gimme Some Lovin" by The Spencer Davis Group
"Well, my temperature is rising, got my feet on the floor
Crazy people rocking 'cause they want to go more
Let me in baby, I don't know what you got
But you better take it easy cause this place is hot"

One of the truly great opening riffs of 1960s blue-eyed soul.  And it goes will with a young man running a precision aerial assault.  Or a precision ground attack.  Or trying to counter preprogrammed electronic dis-co.

17). "I Can't Turn You Loose" by The Blues Brothers
18). "Everybody Needs Somebody To Love" by The Blues Brothers
"We're so glad to see so many of you lovely people here tonight and we would especially like to welcome all the representatives of the Big Ten officiating community who have chosen to join us here in the Michigan Amphitheater at this time. We do sincerely hope you'll all enjoy the show and please remember people, that no matter who you are and what you do to live, thrive and survive, there're still some things that make us all the same. You, me, _them_, everybody, everybody."
19). "I Can't Turn You Loose" by Michigan Marching Band
And suddenly, I am craving cake and electronic dis-co.