The inspiration for this post comes from this post by Greg Dooley at MVictors. (If you don't already check out Greg on a daily basis, you should do so. He's exceptional at what he does.)
I also want to tip my hat to this MGoBoard thread which brought me to this place.

One of the things that has always fascinated me about Michigan is that it has had a variety of logos through the years, and even the Block M has had variations within any given space or time.   When I got the banner seen below for Christmas a couple of years ago, I became even more fascinated by the variations.

So, with this in mind, I am going to post several Michigan logos below, with captions. I will then discuss them below.

1). This is the Block M, no border. According to recent reports, this is the new, preferred, Michigan logo.

2). This is the Block M as seen above, but with a blue border around it.  (Also worth noting: Yost uses a relatively unique Block M rendered primarily in Blue, with a Maize border and then an additional blue border.  I always presumed this was because it is so hard to see a Maize Block M on white ice.)

3). This is the MGoBlue banner variation, which is actually much older than I thought.
It goes back at least to the Canham days.

4). This is a mock-up of the reverse side of a Michigan Marching Band uniform (complete with cape), as you can see it is the straight Block M, but in navy.

5). Apologies for not being larger, but this is the classic "Wolverine Access" logo from the 1990s and it's the Wolverine over the Block M. One of my all-time favorites. A better view here at the Michigan Ticket Museum.

6). This is a variant I had never seen before the banner shown above. It alleges it is from circa 1979-80 and combines the Split M (as seen below) with the wolverine logo.

7). This is the Split M version of the logo used in the 1990s. It was scanned from my 1996 student tickets.
Note the yellow outline around each of the five parts of the M.

8). This is the 1990s style Split M, rendered primarily in Navy. What's funny is that this logo is primarily found at Chris Creamer's Logo Board, but not in any of my Michigan publications that I can find.

9). This is the Split M logo, primarily rendered in maize.

10). This is the currently used split M, introduced sometime during the 2000s.

11). This is the awesomely retro/vintage "Wolverbear". It was very common in the 1930s-1950s to have a cartoonish version of one's mascot, complete with sailor hat. This tradition continues today with Sebastian the Ibis at The U. 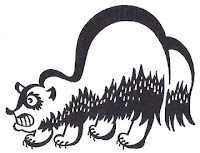 12). This is a Wolverine logo from the 1938 Michigan season ticket order form that I found in the Michigan Football Vault.

One of the most interesting things is the transition from the 1990s Split M logo to the 2000s version.  The 2000s versions always looked like a cheap knock off version to me and the font is generally inferior.  The center of the split M was also the basis for the font in the Michigan end zone at the 1998 Rose Bowl (of which I cannot find a picture at present. The 2005 Rose Bowl featured a maize rendered Michigan end zone on a blue background.  It was essentially a compressed version of the usual Michigan end zone from Michigan Stadium.  The 2008 Citrus Bowl end zone was a less adorned version of the above as well.)


If you look at logo #7, as opposed to logo #10, you will also see a general lightening in the shade of maize.  I know that there is no long term consistency in the shade that maize is, but the current web standards dictate that it's this color, Pantone 109, or in Hex #F9D616. The University's current Maize is Pantone 7406, or Hex #F6D565

One of the reasons that Mr. Madej wanted to point out that the straight maize Block M is not the only logo is because of a simple issue.  It's really hard to see maize on a white background. The blue border allows contrast while still focusing on the Maize in the Block M.  (See my previous comment about the ice at Yost.)

What really hurts me is that the Heritage logos banner seen above is largely incorrect.  The Split M seen there was not used until around 2000.  The wolverine sitting on the Split M is a logo that I have only seen on the banner and on Chris Creamer's board.
The Wolverbear needs to show up a lot more.

If anyone else has any other variants of the Michigan logo that I missed, please let me know in the comments.  Enjoy!
Posted by Craig Barker at 6:39 PM

Email ThisBlogThis!Share to TwitterShare to FacebookShare to Pinterest
Labels: block m, logo, split m, way too obsessed with this for my own good, wolverbear

is that... COMIC SANS on your banner?!

Yes Lindsay, I will admit it, that is comic sans. It was a gift, not a whole lot you can do in that regard. I die a little inside when I see the font.

i just can't believe such a sharp looking banner would use such silly typography.

Interesting article. Definitely enjoyed it. I wish UM would go back to the "deeper" maize of the 80s and 90s. The flourescent look now is not for me.

I have a hat with Wolverbear on it and it's awesome. They definitely need to work that back in.

Not that it makes much of a difference, but the 2008 Citrus Bowl picture you have linked is actually the 2007 Rose Bowl, fwiw.

Here's an interesting article about Michigan's colors which I think is a good compliment to this post: