Things I would like to see, not in the grandiose "If I were King of the Forest" but in the "Well, that would be nice..." kind of way.


1).  The Freeh Report on the massive institutional failures at Penn State contained 119 recommendations for improvement at the school.  If the NCAA sanctions are designed as a deterrent measure to the other schools of the organization, then I would hope that each of the members could also demonstrate how they already meet or are working toward meeting the recommendations in the Freeh Report.  Learn the lessons of others by demonstrating how your structures are in place to prevent horrific things from happening again.

2). That Michigan would learn the lessons of Mike Ilitch when it comes to your team's on the field look.  Fundamentally, the Red Wings and Tigers look almost exactly the same as they did when Mr. I bought the team in late 1992.  The only real change would be the Tigers road look, and even that is a call back to the team's history.  Aside from a Winter Classic look or an occasional Negro League tribute game, the Tigers and Red Wings take the field/ice in the fundamentally same look that the teams wore in the 1950s and in the 1930s.  Kell worse the same jersey as Cash worse the same jersey as Kaline wore the same jersey as Trammell worse the same jersey as Fryman wore the same jersey as Verlander.  Aside from tweaks to the logo, the Production Line and the Russian Five took the ice in the same look.  This is what I want from Michigan, to know that what Tom Harmon wore on the field is what Denard Robinson is wearing on the field.  I know there are those who say that only the home jersey and helmet are sacrosanct, but in looking at the Cowboys Classic look, we're roughly four years away from the dreaded maize jersey, which will be "selected by the senior leadership of Team 137" (Shane, don't let this happen.)

I'd been said before, but remember that a baseball team would need to wear an "alternate" uniform 13 times a year to have the same proportional impact of a college football team wearing an alternate look.  An NHL hockey team would need to do it six times a season.  And this is if you just have one alternate look, not seven different looks during the course of a season.

3). That anyone who decides to drink would be so smart as to call a cab.  Seriously, just call a cab, have a DD, but do not, DO NOT, get behind the wheel.

4). That the NCAA would stop trying to go all DC/Marvel at stop it with the retconning* such as taking away victories and such and instead just let what happened on the field stand with massive footnotes about the circumstances under which they occurred.

*-our friend Greg made this joke first, we very much enjoyed it.

I'm sure there's other things, but this seems like a good start.
Posted by Craig Barker at 5:47 PM No comments:

Stand Up for Slovin in Style!

So a certain OHL team from a city named for the British Empire's second-worst general during World War I is suing the Michigan Daily, Matt Slovin, and a Mr. John Doe for reasons that aren't exactly clear. Poor Mr. Doe - he gets sued a lot. 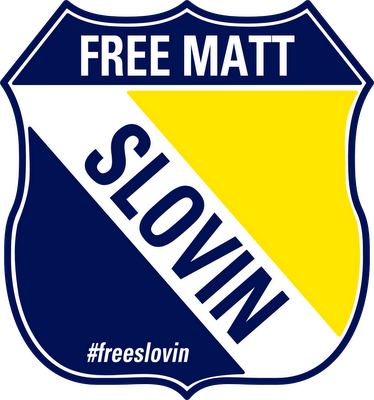 Print it out, stick it on a T-shirt or button, or do whatever you want with it. Ideally, use it to watermark paper on which you state your intentions to drop your silly lawsuit.
Posted by David at 7:29 PM No comments:

"Sighting the Enemy" is an equestrian monument of George Armstrong Custer in his boyhood hometown of Monroe, Michigan, honoring his service for the Union Army during the United States Civil War.  Standing in the heart of downtown Monroe, it is 14 feet tall and was dedicated in 1910 by President Taft himself.  Monroe also has a Custer Airport and a Custer Elementary School, one of the largest in the state of Michigan.

There are six counties in the United States named for George Armstrong Custer, along with two villages, a city, and an unincorporated town.  The US 85th Infantry Division was nicknamed the Custer Division, named for the Fort where it initially mustered during World War I.

George Armstrong Custer rose to prominence during the Civil War for his effectiveness as a cavalry commander, rising to the rank of (brevet) major general.  He was present at Appomattox as a part of the Union delegation that received Lee's surrender of the Army of Northern Virginia.  Custer, however, is best known for leading his U.S. 7th Cavalry unit into an ill-advised attack on the Lakota and Cheyenne, ending in a slaughter at the Battle of Little Bighorn, losing 268 men and seeing another 55 wounded.

Custer's action has been both seen plainly, such as by President (and legendary General) Grant: "I regard Custer's Massacre as a sacrifice of troops, brought on by Custer himself, that was wholly unnecessary – wholly unnecessary." and romantically, most famously by the  Anheuser-Busch company's advertising campaign, showing "Custer's Last Stand" as a part of the larger narrative of the Indian Wars and the efforts to tame the frontier.

In the succeeding 135 years since Little Bighorn, Custer's legacy has been discussed, debated, revised, revised again, and still unsettled.  Some would like to see Custer's name wiped off the map, forgotten, shamed, erased from history.  Others want to honor Custer not for the end of his life, but for what he did before his completely fatal lapse in decision making,  Others see the memorials and encomiums as a chance to be reminded of the whole of a man's life and legacy, as a chance to discuss the past, to understand the circumstances, and know that decisions have consequences.

After all, just because you have sighted the enemy doesn't mean you know how to deal with it.
Posted by Craig Barker at 9:58 PM No comments: