There's no kind of post I enjoy writing more than a post that confuses the hell out of Brian Cook. Since dipping for the Adventure Time well worked out last time, here's a review for their fine football video game, Pro Football 1861. 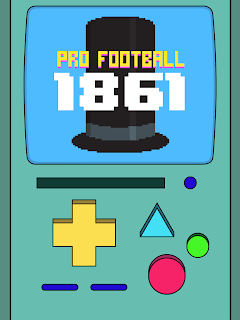 Pro Football 1861 is available in the free version of the Beemo app. B-MO is a character who is essentially a walking, talking, GameBoy. The paid version of the app also include Kompy's Kastle and the delightful Conversation Parade. You also get some ringtones and wallpaper and other stuff kids might like.

Pro Football 1861 features two dueling Abe Lincolns, one controlled by the human (or other sentient creature), and the other by Beemo. CPU Abe throws passes at human Abe, and human Abe moves to kick the passes back over CPU Abe's head. 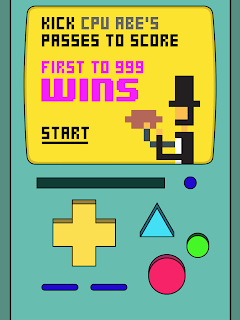 Each time you successfully kick the football over CPU Abe's head, you earn 33 points. If you need help understanding Al Borges's disapproval of bubble screens, imagine that each pass that CPU Abe throws is a bubble screen and that, if a player on the opposing team kicks it back over Devin Gardner's head, then his team earns 33 points. Under such rules, using bubble screens would indeed by absolute folly.


First one to 999 points wins. You can see why college football has never adopted this rule, as no Michigan State game would ever end.

1861 was actually a low point in the history of college football, as Harvard followed Yale's lead and banned all football-type games as overly violent. There was also a war going on which college administrators hopefully thought was of greater importance. However, it would be fun to see an actual football game based on actual reconstructions of various 19th-century rules. Imagine being able to control Team 1 as they battled mighty Racine College!

Pro Football 1861 gets three stars out of four, as it will keep you occupied for 5 to 10 minutes if you need to keep yourself occupied for 5 to 10 minutes. However, it is still a joke game from a cartoon for kids and not an authentic football simulation game; those seeking the latter should consider the Madden series of games, which I understand is quite popular.
Posted by David at 7:27 PM No comments:

(Site note: I'm moving.  Not sites, I mean I am literally in the process of moving from my condo in the extreme Northwest corner of Wayne County to a house in the extreme Northwest corner of Monroe County.  Thus, until we get packed, moved, and settled, columns and site content will be a little light as there is not a lot of extra cycles.  But had to get a couple of notes in...)


What's the hack joke here, that Indiana's a basketball school, and so you expect a basketball score?  That there will be Wisconsin basketball games that will not score as much this season?  That when Baylor and Oregon do it, they're tremendous offenses on display, when Michigan does it, well, you were playing Indiana?  I'm not sure, but I am happy that this is the flavor going in to the second open date, a win at home that was more interesting than it needed to be, that gets Michigan bowl eligible (thus assuring the critical 15 extra practices), that maybe Borges can get out of his own way and call plays for the offense he has, not that offense he wants?

I'm not sure, but Michigan catches a rare break from the Big Ten schedule makers.  facing Michigan State in East Lansing after an open date while Michigan State must go to Champaign before coming home to Michigan.  The word "trap game" quickly comes to mind, especially for a team with just the one rival.  The streak's at 358, a severe test comes up for 359.  Let's see the boys get two solid weeks of practice, get healthy and keep Paul in Ann Arbor.
Posted by Craig Barker at 8:01 AM No comments:

Email ThisBlogThis!Share to TwitterShare to FacebookShare to Pinterest
Labels: column, written in the same amount of time it takes Indiana to score a touchdown

Somewhere in the Library of Babel

Al Borges's vindication for this game does exist (I have seen two of them, which refer to games in the future, perhaps games not imaginary), but those who went in quest of Al Borges's Vindication failed to recall that the chance of a man finding his Vindication, or some perfidious version of his, can be calculated to be zero.

Where the heart is...

Advertisers, for years, have known the drawing power of the idea of home.  Home is where the heart is.  There's no place like home. They know that for all of its faults, the people that we love are there and our memories, good and bad, are tied to this place.  It is thus no surprise that for a century, colleges have realized the power of memory and the draw of coming home to a place we love in order to bring people back to campus, and make a few dollars more. (True story: Missouri "invented" homecoming in 1911 to guarantee that the Kansas-Missouri game would make money on campus rather than having been played in previous years in Kansas City.)

Homecoming is strange for a season ticket holder, because, theoretically, you're there every week, so yes it's "special", it's different, there are nice touches, like the welcoming back of the alumni and the emeriti and the like, but really, they're a sidelight to the football work at hand.  But yes, coming home, to the Big House, with a piece of pottery on the line, just like old times.

The secret, one easily copped to for many, is that for Michigan fans, we love the old times.  We love what was because the past was so good to Michigan.  Michigan's current home winning streak of 18 games is the longest since 1969-1973 (and a 40 game home unbeaten streak from 1969 to 1975).  Michigan has only been out of control of the Jug three times since 1969 (1977, 1986, and 2005) meaning Jon Falk truly has been the caretaker of the Jug for most of his 40 year career.  We love "dull and boring" football games, where you run behind the left tackle, pick up four, and do it again.  We want the old house to be just like we remember it, even if time moves the reality a little bit further into the haze with each passing year, obliterating the facts for feelings, and data for anecdote and story.

Michigan is now 5-0, has won 27 of its last 28 Big Ten home openers, has scored in 356 consecutive games (five shy of BYU's all-time record), and has a very realistic shot of heading into the November from Hell with a 7-0 record.  It reminded itself that it's not perfect, but it does not have to be perfect to win, it just has to play within itself, whatever that means.  But we went back to our lives after our visit home, feeling better about the trip and reminded that home isn't perfect, but there's few other places in the world we'd rather be.

Posted by Craig Barker at 9:00 AM No comments:

I had a high-lair-ee-us tweet all ready to go while I was waiting for the presumably inevitable turnover: "The Constant Gardner Interceptions #AddAWordRuinTheMovie." Fortunately, this attempted comedy never had a chance to join the ranks of a "A Very Brady Hoke Sequel" and "Children of the Corn III: Urban Meyer Harvest," as Michigan played its first turnover-free game since the 2011 edition of the Brown Jug.

After two weeks of near-horror, there's nothing like a safe game plan to get back on track before ratcheting up the difficulty for tougher opponents than Minnesota. Just like reading Pierre Menard's Don Quixote, sometimes things are good even if you know they're coming.
Posted by David at 7:23 PM No comments:

Know of Foe: University of Waterloo

With apologies to the M-Zone, we continue our annual "Know of Foe" series, previewing Michigan's preseason Canadian opponent. This year, the University of Waterloo Warriors come to Yost.

Instead of a full breakdown of the history of the university, I'm going to share a story from a visit I had there a few years ago. After the day's events were concluded, I was treated to dinner and conversation turned to the big story on campus at the time, the discovery that nine players of the football team had tested positive for steroids after one of their wide receivers was arrested for trafficking. The university suspended the football team for the 2011 season.

After two professors offered their opinions on the state of the scandal at the time, a third volunteered the following question, "We have a football team?" So it's not exactly a rabid athletic culture.
As for the university, Waterloo is the Canadian version of Cal/Georgia/M.I. Tech. It's renowned for its Faculty (not department) of Mathematics and the high quality of its computer science and engineering programs. They'd probably produce some great sports analytics if they cared about sports. The university's prowess in technical fields spun off to the founding of Research in Motion (which was a big deal for a while) and also the independent Perimeter Institute for Theoretical Physics. Stephen Hawking hangs out there sometimes. Waterloo's notable alumni include astronaut/Internet sensation Chris Hadfield and Keeper of the Cup Walt Neubrand.

Waterloo hockey finished sixth out of nine in the OUA West Division with a 12-11-5 W-L-OTL record with a 98-104 GF/GA ratio, so that's as an ideal example of "slightly below average." And we can be pretty sure they're not on steroids. Let's say 4-2, Michigan. You can tell I didn't put a lot of thought into predicting this game this year.
Posted by David at 10:00 AM No comments: