By this point in the season, we're all aware that Michigan has a tight end with the last name of Butt and that this fact can be used to make many easy jokes and will most assuredly lead to many amusing "unintentional" double entendres from the broadcast booth over the next four season. But this post is about the added level of merriment brought about by the fact that he's Jake Butt. 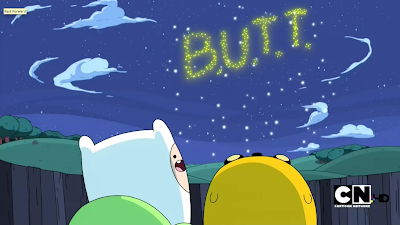 Fans of the late lamented Bender Bending Rodriguez should be pleased that John DiMaggio continues to do voice work on a show set 1000 years in the future in The Cartoon Network's Adventure Time. As Jake the Dog, he voices a character with magical shape-shifting properties. This of course means that his butt also his magical shape-shifting properties and is capable of amazing things. Behind the jump, the mystical powers of Jake Butt.

Jake Butt can deceive the originally villainous figure of the Ice King. As backstory has been revealed over the course of five seasons, the Ice King is now known to also be a tragic figure (Simon & Marcy could be the next generation's Jurassic Bark). But in the screenshot below, he's just been tricked into kissing Jake Butt. (S1E7, Ricardio the Heart Guy) 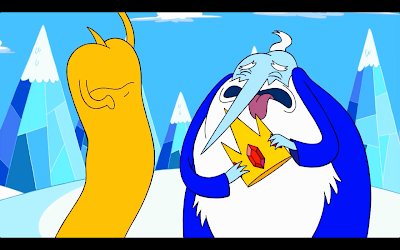 But that's not all. Jake Butt can turn into a pair on bongos and cheer you up when you're feeling ill. (S2E25, Mortal Recoil) 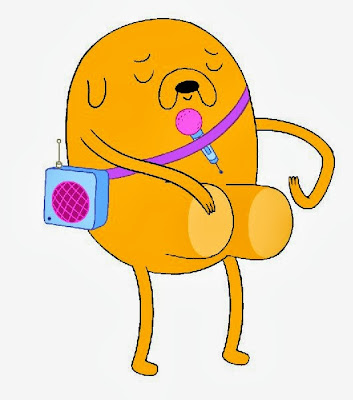 Most impressively, Jake Butt can grow to enormous size and be used to put out wildfires. (S4E1, Hot To The Touch):

There are few things Jake Butt can't do, but those unfortunately include being unable to separate legitimate screen shots from Adventure Time episodes from fan drawings found on deviantART. So Google Image Search carefully and regularly clear your cache.

In conclusion, the Michigan Marching Band should play this song whenever Jake Butt makes a good play.