"This might sound arrogant, and if it is, it is. We're Michigan. We have a global education. We're the winningest program in the history of college football. We have a tremendous staff of guys. The lifeblood for all of us, no doubt, is the guys you bring in your program. We've really tried to focus on the guys that fit the mold of Michigan with the integrity and character that we want to have. We want guys who will play with a toughness, play with an accountability and on a team for each other.  Those guys [recruiters] out on the road, they work it and they do a tremendous job. But first and foremost, it's Michigan."


Short and sweet on this.  I don't know if Brady Hoke means this as deeply as it sounds, but I believe he does.  I don't know if this will translate into a single win in the fall, but I suspect it might.  But if you want to talk about the guy who knows how to sell his product, who knows how to play to his base.  Who knows what any of this means, really, it's just an opportunity to fill column inches and blog posts until we actually get some real football to deal with this.  But you got the word "tremendous", the word "arrogant" and "integrity and character" in there.  Strictly from a lyrical construction standpoint, it's like this beautiful hybrid of Bo, Lloyd, and Fielding Yost.  I'm in Coach Hoke.  I'm drinking the Maize and Blue Kool-Aid (which tastes like blueberry lemonade, which is a definite upgrade from sadness and blood.)  Let's get the season started, and let's let our spirit animal guide our way.

Posted by Craig Barker at 10:02 PM No comments:

With his enshrinement in the College Football Hall of Fame, Desmond Howard has been talking about Michigan football's lack of recent retired numbers.  He's right in this sense, Ron Kramer is the most recent player to be honored, Gerald Ford the most recent honoree.  Consider that for a moment, Ron Kramer played before the near two score decades of Bo-Mo-Lloyd, the "vision" of Michigan football that most hold in their mind's eye.  So there's some validity to this.

Football only has 99 eligible numbers.  Michigan has retired five of them: #11, #47, #48, #87, and #98.  Oddly, these numbers are not honored anywhere in Michigan Stadium, so it takes a discussion of retired numbers to properly honor the men who wore these numbers.  Do we want the same fate to befall #21, or #2, or any other worthy number?  How do we acknowledge the fact that Tim Biakabutuka had one of the all-time great performances in 1995 while wearing #21?  This is a giant game of whack-a-mole; every time we answer one question, two new ones pop up.

My leaning is to go to a Ring of Honor, but Michigan's 130+ year history of playing football makes this a very difficult and complicated selection process.  Would popular players of recent vintage get put up ahead of legendary players of the past?  Would the retired numbers automatically be honored?  There are many questions and very few satisfactory answers.

Here's the real sticking point: #1.  By any right, #1 should be retired (three time , but well, it isn't and it won't be.  It should be retired for AC, but Derrick Alexander and David Terrell and Braylon Edwards had pretty good games in the #1 jersey (and now Braylon controls a great deal of the influence over who wears #1 with his endowed scholarship, making this even trickier.)

My sense is this: "Retire" #21 and #2* to complete the Heisman Trilogy, however, allow Desmond and Charles to authorize players to wear it if they a). play the same position, and b). have earned it. Of course, I say this like it's "easy" but it's not.

*--For what it's worth, I have not seen anything from Mr. Woodson regarding the retirement of his number.  Of course, he's still in the NFL and rehabbing an injury, so it may not be a big deal to him right now.

By the way, the other issue with a Ring of Honor is that you would need to honor almost every Michigan head coach ever: Yost*, Crisler, Oosterbaan, Schembechler**, and Carr***.  With the exception of Coach Carr****, every one of those men has a building on the athletic campus named for them, which leads me to be reminded of Christopher Wren's epitaph: "Lector, si monumentum requiris circumspice." or "Reader, if you seek his monument, look around."

*-You cannot make a statue of Fielding Yost because you cannot capture the old man's smirk in any three dimensional medium.
**--Bo's statue would need to look like Joe Paterno's statue at Penn State and you would need to make a metal version of the banner.  Wait a second, does this not sound like a fantastic idea for a "photo op" at the Big House?  The Bo statue would need to look like this, block M hat, sunglasses, headset and the base would need to have "The Team, The Team, The Team" on one side and "Those who stay will be champions." on the other side.
***--The Coach Carr statue would just be this picture (yes, I know, all of you want the Capital One Bowl ride off in to the sunset, but this photo is so much more Coach Carr.)  It would also have a dictionary in its base where people could look up words and learn something, and the base would simply say "Tremendous."
****--I thought for sure that the Glick Building was going to be named for Coach Carr, which would have been awesome because then we could have called it the Carr-port.

I do think that the Ring of Honor is coming, especially if Mr. Brandon's vision of the breezeway connecting the east and west concourses with a south concourse comes to fruition, as , especially if it were brick arch, would be the perfect spot for the names.

In the end, this is going to be something that continues until an announcement from the Athletic Department is made, and I suspect that announcement has been delayed as Mr. Brandon struggles with many of the same issues we has as fans.
Posted by Craig Barker at 3:13 PM No comments:

Let me just say that I am, officially, a card carrying member of Uni Watch. (So is Geoff, as a gift from me, he got the MMB uniform.) So it's no surprise that I am tracking Michigan uniform changes, because, well, it's what we do.
So, M-Den put up the new hockey jerseys for 2011-12 tonight and reaction in the Michigan Twitterverse was swift. So let's take this step by step.  (As a reminder, here's what we said in 2008.) 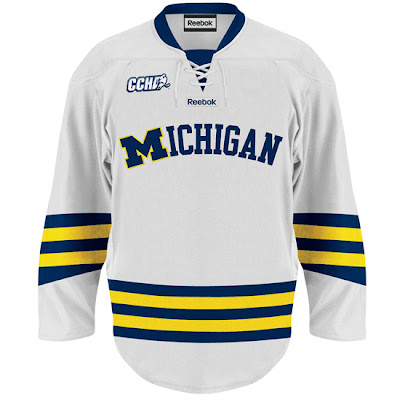 It's a variation on the much beloved home whites from the last two seasons, swapping in a maize outlined Block M for the M.  I presume that there will be sleeve numbers and number on the chest as well, like the old ones.  I see the faint echo of the 1989 men's basketball jersey in this.  I don't hate it, but there was no need to change last year's look.  That was a classic for the ages.  Also note that Reebok is now the maker of the hockey jerseys, instead of Reebok's parent company adidas.  The logo also moves from the left shoulder to the center.  It's not terrible, it's just unnecessary. 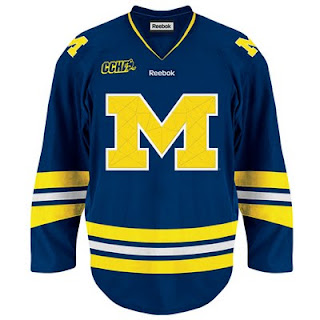 The road blues are largely unchanged from last year, save the slight alterations to the sleeve striping (which I don't get), the shoulder patches now being straight block Ms instead of the Hockey Sticks M, and the Block M now has chain stitching on it.  There will be "OUTRAGE" at this similar to what happened with the Under the Lights jersey, but there is late 20th century/early 21st century Nike precedent for this.  Also, I am pretty sure that the stitching will be the same color, meaning that it will not show up as readily as it does in this image.  I'm wondering if this signals the end of the Hockey Sticks M, but for now, no harm, no foul. 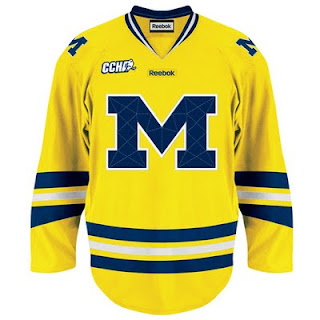 Ditching the Rangers angle lettering to go with consistent Block M branding, this makes the Maize third just a maize version of the road jersey.  It's a little disappointing, because I liked that Michigan had three distinct looks for its three jerseys, but this isn't bad.  I am hopeful that the chain stitching is non contrast, but this isn't a bad look.

Overall, none of these are "bad" as much as the changes feel "unnecessary" and there's kind of disheartening.  It's nothing new.  Go back and look at Michigan hockey's jersey history and you'll see more changes than an EPL team, but I'm mostly disappointed because my hope was for a reverse of the homes where the Block M would be the home whites (with a Maize M outlined in blue) and the road blues would have been the arched Michigan.  I also kind of wish Wolverbear were the shoulder patch.  That would be insanely awesome, if off message.

Have at them below.
Posted by Craig Barker at 9:34 PM No comments: