In The Vault, we at the HSR take a look at an old MMB performance or an old Michigan game of some sort. Our first installment is conveniently archived on YouTube, and it's the band's halftime performance at the '73 Super Bowl.

In 1973, a scaled-down block of the Michigan Marching Band became the first Big Ten band to play in a Super Bowl halftime show. They traveled west to the Los Angeles Memorial Coliseum for the glory that was Super Bowl VII, where the Miami Dolphins capped their undefeated season by taking down the Washington Redskins, 14-7. The '72-'73 band was the second to be conducted by George Cavendar and his first after assuming the title Director of Bands for the whole university, so we're talking about the immediate post-Revelli period.

The first clip looks like a standard college halftime, just with celebrity guest Woody Herman in all his '70's California glory, trying to see if America is ready for an ensemble composed of nothing but lapels and those sunglasses your grandpa down in Florida still wears. He plays all of five notes on his clarinet before breaking out the soprano sax for the next tune, but everyone (i.e. anybody who know who Woody Herman is) is just waiting for him to go back to clarinet for "Woodchopper's Ball".

And things have taken a turn. There are golf carts disguised as motorized helmets roaming the field, there are golf carts roaming the field. And each one comes equipped with its own girl in knee-high boots and geographically-appropriate sash, like they're all pageant queens. I have this nasty feeling that not all of them are fans of the teams they're representing. I'm just sayin', Miss Green Bay and Miss Oakland might be ringers.

The band sounds great, but the drill formations of the day look a lot like an 8-year-old's stick figure drawings. And, hey! Flip folders. The Latin tune is kind of random, but the MMB always sounds at its best on these.

The hell? Suddenly we have a very random, very WHITE choir on a very fast take of Woody Guthrie's "This Land Is Your Land", which really isn't nearly as gung-ho patriotic as the NFL would like us to believe. The choir sounds like someone set the record player to the wrong speed. Stock footage! WOOO! And...no, no, no. I will not accept this. The cheese factor was really high already, but a caricature of a 747 being CARRIED AROUND BY RANDOM DUDES does NOT belong anywhere near the MMB. This is ridiculously stupid. I hate you, 1970's. Dear God, the visual metaphor of the plane stopping in different cities and triggering the most obvious song...it's like a Looney Toons cue, but we're supposed to take it seriously. And this choir is still moronic. They sound lobotomized.

A historical note: A map of the continental US is part of the standard marching band repertoire, reserved for any patriotic tune the band plays when they haven't formed an eagle or a flag or George Washington's head. Nobody's ever really sure what to do about the Upper Peninsula, and sometimes it just disappears altogether. The same problem crops up with the Boundary Waters area in Minnesota. Also, continental drift has drastically reshaped Florida from how it's depicted here. The last time the MMB broke out the this formation was for the 9/11 anniversary show last year, but a fake Boeing zooming around the country was deemed unacceptable for obvious reasons (Someone remembered how dumb it looked in this video).

ANDY WILLIAMS! You should probably watch out for Claudine Longet, Andy, out on that platform. Actually...play on, Ms. Longet. "Marmalade, Molasses, and Honey" sucks, and all Andy can do is think, "God, I'm good." OH, PLEASE, DO IT NOW. "People...people who need people"...may need to be removed from my presence before I do them grievous bodily harm. WHY WON'T THIS END? Every time I see a bird release, I think of those doves getting cooked in the Olympic cauldron. Yeesh. Andy's really stretching for it on that last note. And...we're out.

The whole production is pure, unbridled, Grade-A 1973 crap. At the same time, the band sounds terrific. The percussion is muddy in the first clip, but everything else tells you that the Cavendar disciples aren't entirely full of it when they talk about how good they were. Don't ever let them know I said that. At the same time, high step at these tempos looks goofy and half of the drill formations are dorktastic.

Email ThisBlogThis!Share to TwitterShare to FacebookShare to Pinterest
Labels: focus on the bands, mmb, the vault 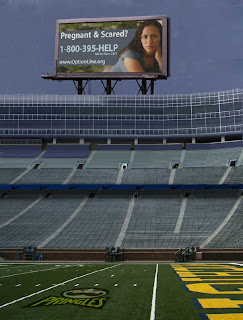 Email ThisBlogThis!Share to TwitterShare to FacebookShare to Pinterest
Labels: basketball, football, hockey, things too long to read, whatever this is

An Idea Whose Time Came Some Time Ago

I would buy this game.

WTI: Schadenfreude Is the Best Kind of Freude

Email ThisBlogThis!Share to TwitterShare to FacebookShare to Pinterest
Labels: basketball, hockey, things too long to read, whatever this is

The search for the next Michigan Marching Band director has been narrowed down to three finalists. Below is the text of the e-mail describing the candidates and the dates of their 'audition' in front of the students, as sent by Prof. Haithcock to students on 3/27.

Monday, April 9: Isaiah Odajima is currently assistant director of the Michigan State Marching Band. When you look past the color green and the MSU connection, you will remember his drill designs (think Homer's head). Numerous video submissions of marching shows from other applicants utilized his designs and he is viewed as one of the most creative experts in drill writing in the country. He knows the expectations and potential of major college athletic bands, including the MMB. Rivalry aside, MSU is a great collegiate marching band. Mr. Odajima went to MSU to work as an assistant director while working on his doctorate (which you can't do at UM). He is too smart to mingle traditions or make changes that you should fear. He is an excellent musician whom I have known for a decade as he studied with me while obtaining his masters degree at Baylor University. His personality is warm and engaging. He is married and has a four year old son.

Thursday, April 12: Scott Boerma is currently director of bands at Eastern Michigan University. Mr. Boerma is as nationally known in arranging as Prof. Nix and his arrangements were as equally present in the submissions of other applicants as Mr. Odajima's drill writing. He taught high school for many years and his work with the Madison Scouts was behind much of their musical success. He is a Michigan native who is known by every high school band director in the state. While EMU is in the MAC, the quality of his work both on that campus and through his national visibility makes him a strong candidate. Composition is something Mr. Boerma is increasingly interested in as he expands his creative horizons. If you have met him at an MMB rehearsal, you know he is very gregarious and outgoing. He and his wife Amy already live near Ann Arbor.

Monday, April 16: Craig Cornish is director of the marching band at Middle Tennessee State University, a position he has held since 2002. Prior to locating at MTSU, Mr. Cornish conducted the marching band at Nebraska for four years. Moving from Nebraska to MTSU appears an odd transition until you realize that Mr. Cornish left Nebraska of his own accord due the pitiful salary afforded him by the athletic department at that institution. One reference at Nebraska told me "our athletic director at the time paid Craig less than he paid the kids who pick up the towels the players drop." This is not an issue at UM as the salary for this position is both an endowed chair and supervised by the Dean of the School of Music, Theatre and Dance. Mr. Cornish taught public school music in Kentucky for fifteen years and his ensembles had outstanding success. He has won university wide teaching awards at both Nebraska and MTSU. His references suggest, "students will love his warmth and enthusiasm, plus he really knows how to motivate students to do better than their best." His resume shows the quality of his work in both drill design and arranging. In addition, the size and quality of the MTSU marching band is major even if the athletic conference is minor. Mr. Cornish would view this job as a "destination" job.

The candidates will be subjected to a rigorous interview process. This includes a "leadership forum" meeting with drum major, rank and section leader candidates, a teaching session with available students, an open forum for all students to ask questions, a time to fill out evaluations, and individual or small group meeting times. Additionally, each candidate will have to meet with the search committee, the dean of the School of Music, two meetings with Prof. Haithcock, several with the MMB staff, and a presentation to music students.

[edit: content deleted, 1984 big-brother style, because it's not worth having it up.]

But there we have it. Directors from MSU via Texas, MTSU via Nebraska, and EMU via Novi. A decision will be announced at the beginning of June.
Posted by Jeremy at 3:32 PM 10 comments:

Email ThisBlogThis!Share to TwitterShare to FacebookShare to Pinterest
Labels: focus on the bands, things too long to read

Breaking: John Beilein Is The Next M Basketball Coach

It's lighting up all over the place, but multiple sources have John Beilein, late of West Virginia, accepting the job as Michigan's next men's basketball coach. Brian's been on top of this all day, and now CBS Sportsline has it too. I think it's gotta be a done deal by now, and I can only hope for the best for Beilein and our program.
Posted by Geoff at 8:57 PM 1 comment: