Dave Brandon applies techniques he learned in the pizza business to making sure that Michigan athletics remain compliant: 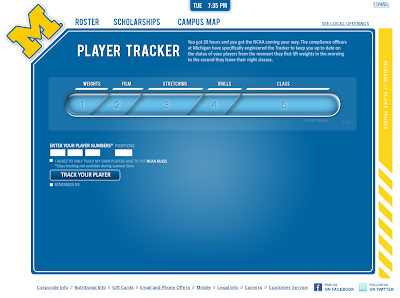 (Massive hat tip to HSR Northwest Bureau Chief Dave for this one.)
Posted by Jeremy at 9:38 PM 1 comment:

Email ThisBlogThis!Share to TwitterShare to FacebookShare to Pinterest
Labels: consumerism, fair use, football, freep, fun with photoshop, HSR Correspondent Dave, Lemonade out of Lemons, please don't sue us, you're welcome

Yes, we've been away for a while. Can you blame us? Anyway, we would be remiss as (to varying degrees)

e). all of the above

to not congratulate Michigan's Surya Sabhapathy for making the finals of the Jeopardy! College Championship for 2010. We genuinely do not know the results, so we will be pulling for her on the two-day final this Thursday/Friday! Way to go Surya!