Ahh, October hockey. So easy to lose sight of it in all the football talk. Michigan has already played 3 real games, including a pair in the CCHA. They opened the season with 2 periods of solid hockey that looked like it was leading up to comfortable win over Mercyhurst, a team that plays in that Sun Belt of hockey conferences, Atlantic Hockey. OK, maybe that's unfair. They could be Conference USA. Whatever they are, the Wolverines let a 4-0 lead evaporate into a 2-1 shootout loss. Even though the game goes into the NCAA books as a tie, it's still a big disappointment to let up on the gas like that.

Michigan responded the next night with a 4-2 exhibition win over Western Ontario. Generally Canadian teams aren't very good, but Yost Built noted that UWO is supposed to be one of the better ones out their, with a goalie who has a fair amount of OHL experience under his belt, so this one is probably an even better win than it looks.

Last weekend, Michigan played the rare series with Bowling Green that wasn't a home-and-home, sweeping the Falcons 4-1 and 4-2. Bowling Green was a terrible team last year, yet still managed to take a game at Yost, so it's good news to see a pair of moderately decisive victories to start the CCHA season. Shawn Hunwick got the Friday start and Bryan Hogan the Saturday, and that looks like it'll be the rotation in the early part of the year. Hogan also got the start on Tuesday night for the exhibition game against the US Under-18's in a 3-0 shutout.

So...that's the season thus far. One bad data point to start the year, a few encouraging ones to follow it up. We'll see how the rest of it goes. I don't expect the domination we got from the '07 team, but I'm hoping we don't see the "excitement" we got last year. Up next is a single game this weekend with New Hampshire out in Durham. Just like the BU game last year, we don't get any TV coverage. What's up with that, Hockey East?

New Hampshire is led by senior forward Paul Thompson, who put up a 17-19--36 line last year, a big step down from departed Hobey Baker finalist Bobby Butler's 27-50--77, but Thompson could very well blow up this year like Kevin Porter did in '07-'08. Nobody has more than one goal goal yet, but freshman Phil DeSimone has a couple of assists to go along with his tally, making him the points leader at 1-2--3. UNH's goalie is junior Matt DiGirolamo, who's played sparingly over the last couple of seasons. He had a .906 SV% and 3.24 GAA in four games last year, and he's at .899/4.01 this year after their series with Miami, for what that tiny sample size is worth. He's backed up by two guys who have yet to register any statistics, junior Tyler Scott and freshman Jeff Wyer.

Like Michigan last year, New Hampshire squeaked into the NCAA tournament. Unlike Michigan, they had to sit on their hands and hope for things to fall their way after losing their Hockey East first-round series to Vermont. The Wildcats made it in as a #3 seed and proceeded to absolutely demolish what was supposed to be a good Cornell team with a spectacular defense by a score of 6-2. The University of No Hardware then turned around and were horsewhipped by RIT by an identical 6-2 margin. Woo, single-elimination hockey!

This is all to say that I have no idea what to expect on Saturday night. You could get Good UNH or Bad UNH on any given night. This year, they've already lost to Miami 6-3 and beaten Miami 6-3, while tying a St. Francis Xavier (a Canadian university) 3-3 in an exhibition. They seem to be an entirely schizophrenic hockey team, and I think someone's walking out with a 5-3 win, but I don't know who. Game on.

Email ThisBlogThis!Share to TwitterShare to FacebookShare to Pinterest
Labels: hockey

The 24 hour rule, the Peloponnesian War, and an Oracle. 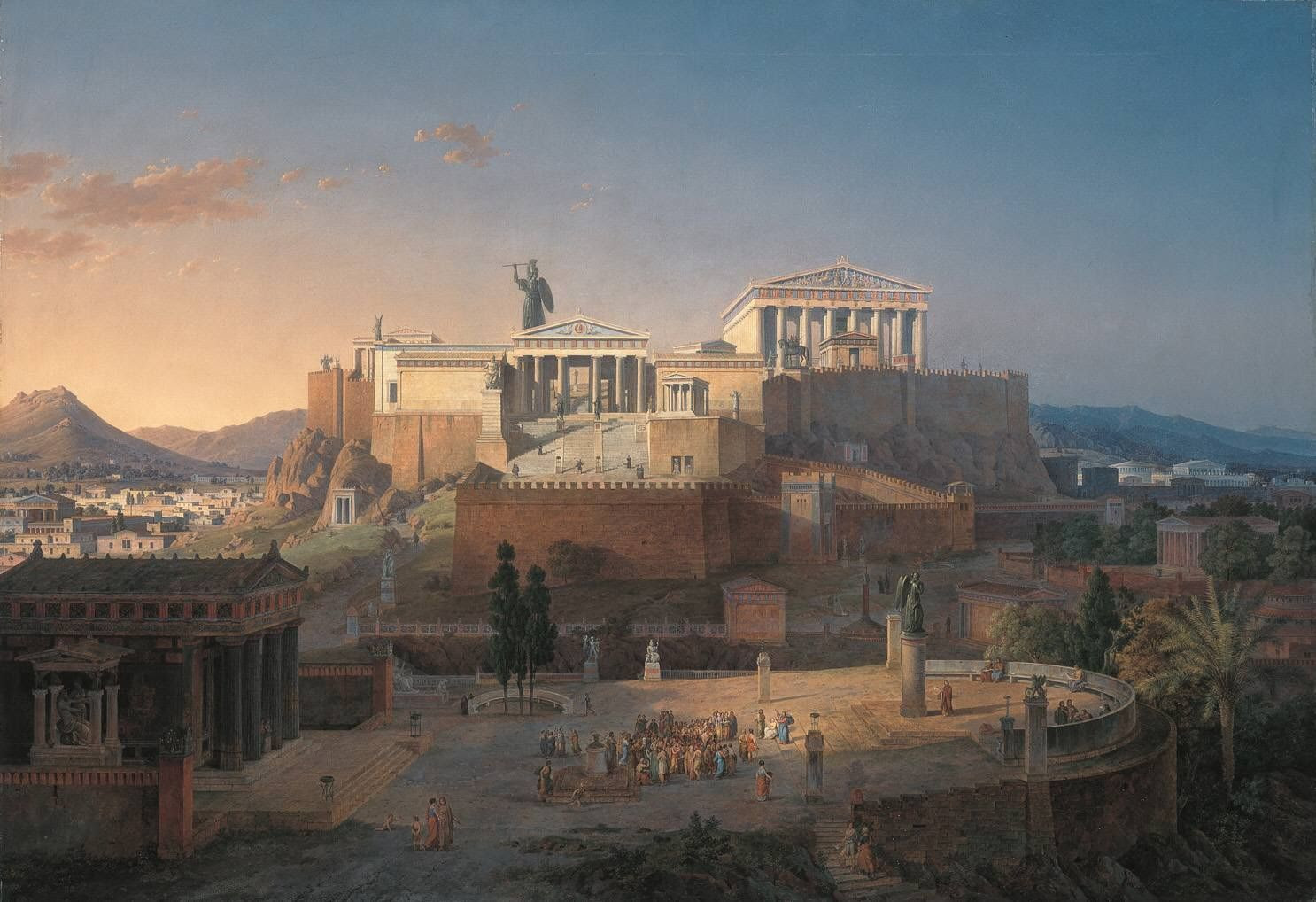 I have this rule at work about what I do when someone sends me an email that sends me into a near apoplectic fit.

1). I resolve that I will not respond for 24 hours if at all feasible, or 12, or 1 hour as the situation warrants.

2). If I can, I will write out the angry response I want to write in Word, and then immediately delete it and close Word.

This has the advantage of getting everything off my mind that could be unfortunate before actually responding. So trust me to say that there was an epic post that went into the digital ether on Saturday night. I don't remember much of it, but I do know that there was a point where Dave, my college roommate and Michigan football partner in crime, and I were contemplating how cathartic the actions of certain Central/South American or Serbian "ultras" must feel at soccer games and we'll leave it at that.

It was a little later that I was struck by the story of the Peloponnesian War. The brief version of it was that for most of the 5th Century BC, Athens had leveraged its power into protecting the other Greek city-states, earning tribute from them and in turn had used it to build up temples and public works. It set forth the attitude that it was the greatest, the finest, and that it always won. Then, in 430 BC, a plague struck Greece, hitting Athens harder than any other city-state, killing anywhere for one-third to two-thirds of the population of Athens and their longtime leader, Pericles. Pericles had been a long time defensive strategist, a conservative who would rather force the enemy into making a mistake, but with him gone the Athenians now went for a bolder strategy, bringing in a clever new general who tried audacious new strategies. The Athenian population was excited but concerned, the Spartan leadership was staunch, the best it had been in decades and the Athenians were divided over whether the new general could win. It was not until the Athenians decided to get involved with Syracuse that the Athenians reached the point of no return and the Spartans would conquer the hated Athenians.

Now, it kind of falls apart from there. We could talk about how the Spartans repeatedly offered terms of peace to the Athenians, but the Athenians were too proud to accept them. We could talk about how Athens would be come to be ruled by the Thirty Tyrants as a reaction to their defeat, only to see democracy quickly restored. We could talk about how the Spartans were eventually humbled by the Thebans at the Battle of Leuctra thirty years later. We could talk about how Athens and Sparta were both eventually conquered by Philip II of Macedon. But these parallels fall apart. The reality is, for the third straight year, Michigan can only see that it lost to Michigan State. It can only see that Michigan State had an exceptional game plan, executed it to a T, and forced Michigan in to making mistakes. Michigan is left to stare at its glorious temple on a hill, dedicated to those who have protected the citizens for years, looking for signs from an oracle, and wondering if we are interpreting the ambiguous garbled messages correctly, or if what the holy man told us was only what we wanted to hear.


What I do know is that for the Athenians, the temple is still there on a hill, a glorious ruin of what once was, one of the true wonders of their Classical Age. For the Spartans, their legacy is a bunch of CGI abdominal muscles and kicking foreign diplomats into a bottomless pit in the center of their civilization. The side upon which you fall on this debate tells you all you need to know about yourself. Because the Oracle can't tell you anything. Even about the 3-3-5.

(with so many apologies to Paul Simon)

"The problem is all with your defense", they said to me
The answer is the offense, as you'll see logically
We'd like to help you in your struggle for bowl eligibility
There must be forty-two ways to beat Indiana

Posted by Craig Barker at 12:52 AM No comments:

Email ThisBlogThis!Share to TwitterShare to FacebookShare to Pinterest
Labels: column, indiana, it's better than my Boy in the Bubble parody, parody
Newer Posts Older Posts Home
Subscribe to: Posts (Atom)