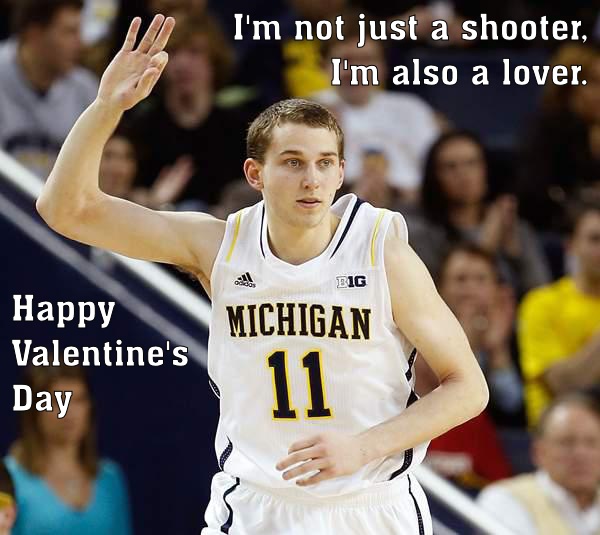 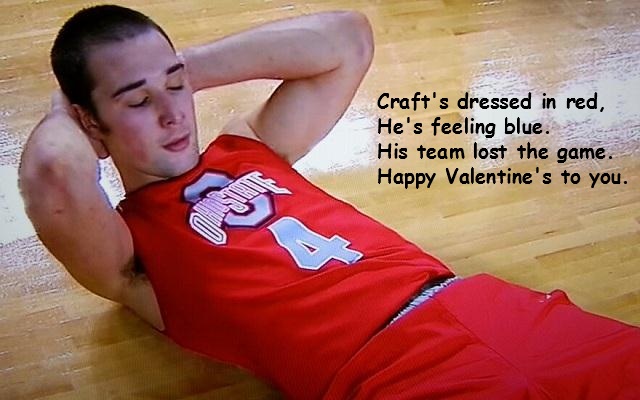 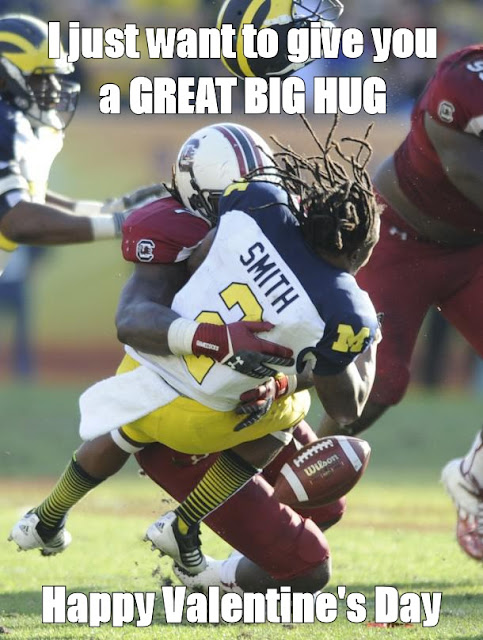 Unless it's an elimination game, the following statement is almost always true about court-stormings: it's better to be the team quietly slipping away down the tunnel than the team partying with its fans at center court. What's worthy of storming the court? Beating the best when you're not among the best yourself. Defeating Michigan basketball is worth storming the court again. That's a good sign.

No denying it though: that loss hurt. That loss fuck-fuck-fuck-fuck-fucking hurt and there are no non-profane words to describe how much it hurt. Getting the #1 overall seed in March will be tough. Getting to play at close to home at the Midwest Regional in Indianapolis will be tough. But, you know what? The day after, once the pain has died down a little, not having those things may not be so bad.

Michigan has lost three tough, close games on the road, in three extremely hostile environments, to three teams ranked in the kenpom's Top 15. Michigan also one road win (@Minnesota), one home win (vs. OSU), and one neutral-site win (vs. Pitt) against the kenpom Top 15.  It's not that they can't win against the top teams. They've never been blown off the court for a whole game like Duke or Florida have. This team can't quite seem to get it done in a hostile road environment. Fortunately, there are no true road games in March. The question is: are there practical road games, where the arena will be pulling against the Wolverines?

Barring a total late season collapse, Michigan has already done enough to earn the right to play its first and second round second and third round games in Auburn Hills in front of a friendly crowd. It won't be as good as Crisler if Michigan State is playing there too, but it's still the best place to be.

But what about the regionals? I took a look at today's kenpom Top 40 teams and, for each team, I looked at which regional site they're closest to and ordered them from closest to farthest. Teams that are within a four-hour drive of their nearest regional site are bolded. Georgetown is included in the Midwest Region because they are hosting the East Regional and can't be played there.


Not only is the Big Ten the best conference in college basketball this year, but a lot of Big East powers are located at its western edge, and Butler, Kentucky, and St. Louis are also nearby. On top of this, Notre Dame and Illinois are located in the 40s in kenpom and a short distance from Indianapolis.

Michigan showed it can acquit itself well against potential high seeds at a neutral site with its Preseason NIT victory. Based on where the top teams are located, Indianapolis is the worst place for them to be: it's the only place where Michigan fans could be drowned out by any number of opposing fanbases. The only other possibility that comes close is have to face a resurgent UCLA at the Staples Center.

So, let's posiblog. If Indiana gets the top seed in Midwest Regional, Michigan is probably not going to be forced into hostile territory. No regional site is within four hours of Duke, Kansas, Florida, Arizona, or Gonzaga. Outside the Midwest, the highest-ranked schools that are close to a regional site are #21 VCU and #22 Virginia. No major power is particularly close to the Georgia Dome.

If Michigan ends up a low #1 seed or a #2, we'll travel. We'll be all right. Someone's going to have to go to Arlington. It'll probably turn out better than the last time.

But still, Ben Brust: fuck that guy.
Posted by David at 11:36 AM No comments:

REPOST: Here's my cat, still napping in the baby bouncer

Aaron Craft and the Four Factors of Hate

While thinking about Tuesday's game against Ohio State, I was struck like I walked through a plate-glass window by the observation that, although Deshaun Thomas is clearly OSU's most valuable player, Michigan fans didn't experience massive schadenfreude in seeing him lose. Instead, we were filled with glee to see Aaron Craft lying on the floor in defeat. Part of the reason I find Craft so annoying is that he's the beneficiary and victim of Ecksteinism, or "scrappy white guy media affection." Another part of the reason is that his aggressive defense always makes you wonder, "How on earth was that not a foul?"

I'm not going to try and quantify media overexposure in this post. What I'm going to try to do here is use nothing but freely-avaiable statistics to try and predict which players in Big Ten men's basketball inspire the most hatred in opposing fanbases solely by the way they play. I downloaded data for all Big Ten men's players this season, including conference and non-conference games through February 7, and then eliminated the players who haven't seen the court for at least 100 minutes. This left a dataset of 113 players for which I attempted to determine "The Four Factors of Hate."

The first factor I came up, inspired by Craft, is steals per personal foul. There are two kinds of players who can rack up the steals and not the fouls: the player who never gets whistled for overaggressive defense and the player who is actually really good at stealing the ball. Both of those players will drive you crazy when there's on the other team. Here's the leaderboard for ST/PF:


The second factor is the ability to draw fouls. Sports Reference College Basketball doesn't have this listed as a stat, so I estimated it with the formula ADF = Free Throw Attempts/(Minutes Played * Usage %). This stat favors the frontcourt, with centers and forwards occupying eight of the top nine spots. Two factors in and it's clear Penn State really misses Tim Frazier.


The third factor measures three-point specialization: it's the fraction of made field goals that are three-pointers, of 3FG/FG. A whopping 92% of Penn State's Nick Colella's made shots are from outside the arc, almost 14% more that #2 Josh Oglesby.


After the jump, read about the fourth factor and see the leaderboards of hate.

Land-Grant Holy Land is reporting that ohio is updating their athletic logo and their official seal and, in the words of Luke Zimmerman, this "ruins everything." As the sports blogosphere's leading authority on university seals, we can't let this change go unremarked. Let's take a look at the old and the new:


So there is one big change and one big no-change. The big no-change is simple: this was the time to get rid of the small caps and put "THE" on equal footing with the rest of the university name. If you insist on calling your school "The Ohio State University," why wouldn't you make your seal say it? Just shift that ribbon down a little and you've got room.

The big change is something that should be problematic for any academic institution. The circular O on the shield has been replaced with the Block O that has signified ohio's athletics since 1958. That's the tail wagging the dog. It's not just something Mark Emmert says to himself to feel better at night, it's actually true: academics come first. Among other FBS schools, only TCU, East Carolina, and Rice have obvious links to their athletic team names on their official seals, and Rice in particular is forgiven because Owls are a well-established symbol of wisdom. (We're even forgiving ohio the buckeye leaf. It predates the athletic department.)

Last year's failed University of California System rebranding failed because the new logo was both modern and dated: it looked like it was made around 2010, and if it had been permanently adopted, it would look like it was made around 2010 a hundred years from now. Having an obviously dated seal isn't necessarily horrible - when we ranked the seals of the Big Ten, Purdue's 1960s-style seal had a modest amount of support - but it's not as good as a well-established classic. Even if classics are the best, a new seal can still have a timeless feel: Memphis's recent rebranding (warning: PDF) is a great example of a well-designed new university seal.

But seriously, ohio, you can't put your athletic logo on your official seal. This supports every stereotype you hear in Ann Arbor. That ohio only cares about winning The Game and mucking Fichigan and, in order to do that, they'll let their athletic department run roughshod over the university to the point that it actually changed the official seal. If you want to update the seal, just add some color: put in some scarlet and gray to replace the pencil shading. Be a university your athletic department can be proud of.

As for your hideous new athletic logo and wordmark: we have no particular opinion on that. We're a Michigan blog. As far as we're concerned, all your athletic designs are hideous.