Aaron Craft and the Four Factors of Hate

While thinking about Tuesday's game against Ohio State, I was struck like I walked through a plate-glass window by the observation that, although Deshaun Thomas is clearly OSU's most valuable player, Michigan fans didn't experience massive schadenfreude in seeing him lose. Instead, we were filled with glee to see Aaron Craft lying on the floor in defeat. Part of the reason I find Craft so annoying is that he's the beneficiary and victim of Ecksteinism, or "scrappy white guy media affection." Another part of the reason is that his aggressive defense always makes you wonder, "How on earth was that not a foul?"

I'm not going to try and quantify media overexposure in this post. What I'm going to try to do here is use nothing but freely-avaiable statistics to try and predict which players in Big Ten men's basketball inspire the most hatred in opposing fanbases solely by the way they play. I downloaded data for all Big Ten men's players this season, including conference and non-conference games through February 7, and then eliminated the players who haven't seen the court for at least 100 minutes. This left a dataset of 113 players for which I attempted to determine "The Four Factors of Hate."

The first factor I came up, inspired by Craft, is steals per personal foul. There are two kinds of players who can rack up the steals and not the fouls: the player who never gets whistled for overaggressive defense and the player who is actually really good at stealing the ball. Both of those players will drive you crazy when there's on the other team. Here's the leaderboard for ST/PF:


The second factor is the ability to draw fouls. Sports Reference College Basketball doesn't have this listed as a stat, so I estimated it with the formula ADF = Free Throw Attempts/(Minutes Played * Usage %). This stat favors the frontcourt, with centers and forwards occupying eight of the top nine spots. Two factors in and it's clear Penn State really misses Tim Frazier.


The third factor measures three-point specialization: it's the fraction of made field goals that are three-pointers, of 3FG/FG. A whopping 92% of Penn State's Nick Colella's made shots are from outside the arc, almost 14% more that #2 Josh Oglesby.


After the jump, read about the fourth factor and see the leaderboards of hate.

The fourth factor is just plain old free throw percentage. It's annoying seeing the bad guys calmly sink the shots that slowly put the game away. I only weighted FT% half as much as the other factors for two reasons. First, sinking free throws is just not as annoying than hitting open threes or drawing fouls and second, the numbers are a little of out of whack for players who almost never get to the line. The next chart shows the Top 10 FT% leaders with at least 20 FT attempts; Spike Albrecht's 7-7 from the line didn't make the cut.


These factors aren't on the same scales, so I calculated the league mean and standard deviation and converted each player's raw factor score into a normalized z-score. Each of these stats in a rate stat, so I defined the Hate Rate as HR = ST/PF + ADF + 3FG/FG + 0.5*FT%. Based on HR, the most annoying players in the Big Ten are:


The top two spots illustrate the issues with Hate Rate. Tim Frazier is off the charts because he built up his stats on the non-conference schedule, and his ruptured Achilles tendon means he's not playing the conference games that would bring him back to the pack. Meanwhile, Minnesota's Maverick Ahanmisi puts up a good rate, but he only averages 10 minutes a game.

You can't be really annoying if you're not out on the floor. So I multiplied the hate rate by minutes played to get old-fashioned HATE.


This seems reasonable; I don't think Indiana is too fond of D.J. Richardson of Brandon Paul right about now. For Michigan's opponents, Nik Stauskas is quite the annoying player and he's extra-annoying because he's not just a shooter™: about a third of that hate comes from ST/PF. Since HATE is based on only what happens on the floor, we can't take into account the inherent inability to hate something as curious as a Canadian-born player being good at basketball. (Steve Nash was born in South Africa and James Naismith wasn't very good at the sport he invented.)

One last step is needed. So far I've only used stats from Sports Reference College Basketball, but we can't have four factors without accounting for tempo. So I divided each player's HATE stat by his team's average number of possessions per game as reported by kenpom, ending up with Tempo-Free Hate.


It feels right now that Aaron Craft is in the Top Ten. Using TFH, we can assign each team its "Most Hateable Player" award.


Surprisingly, no one on Wisconsin has a high TFH score; we'd have to somehow factor in style and teamwork to get a handle on the Badgers, because as a team they are way more annoying than the sum of their parts.

I expected a correlation between being hateable and being good at basketball. As a quick overall measure of a player's quality, I took the difference between his Offensive Rating and his Defensive Rating. The Pearson correlation was 0.38, which suggests that basketball ability plays an important role in determining if a player is worthy of hate, but is by no means the entire story. 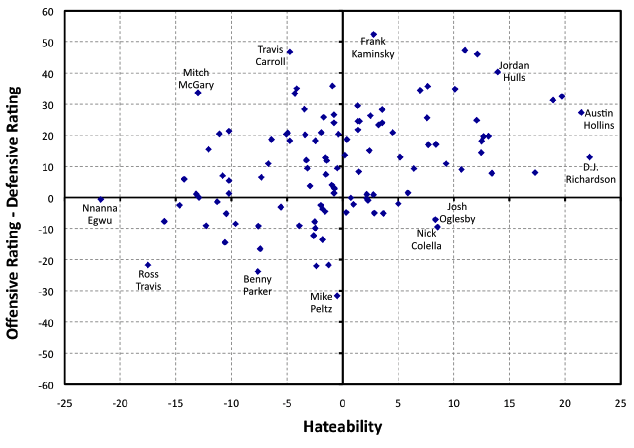 Nnanna Egwu is the least hateable player in the league, although as a player he's perfectly average. Nebraska's Mike Peltz has the worst performance in the league so far in relatively limited playing time; he's still relatively hateable thanks to small sample size. Two of his four FGs this year have been three-pointers, so he scores highly in 3FG/FG.

The least hateable player relative to performance is Mitch McGary. He hasn't even attempted a three-pointer this year, which minimizes his hate three-point factor score. McGary generates great offensive performance with good rebound numbers, but he does it while committing his fair share of fouls and not drawing opponents into committing theirs. Coupled with 55% from the line, he scores terribly on all four factors of hate. The stats bear it out: he's loveable.

Lastly, here are the team rankings for tempo-free Hate. There's a decent association with W/L record here. Indiana scores really highly because they have specialists in each of the factors: Jordan Hulls makes the three-pointers, Victor Oledipo gets the steals, Cody Zeller draws the fouls, and Christian Watford makes the free throws.  When they merge into one team, they somehow keep from being the Voltron of annoying.


Describing an emotion like hate is semi-quantitative at best. We obviously haven't handled all the basketball-related reasons why a player could inspire so much contempt from opposing fans. I disregarded blocked shots because they're impressive; I also didn't consider rebounding because it's such a fundamental skill at which every player should have some ability. An uncanny ability to get offensive rebounds may be worth factoring into the equations though, along with flagrant fouls.

We're also just considering negative affect here: the skills that drive opposing fans crazy. Something else to identify might be "The Four Factors of Tolerability," i.e., the features of a player's game that demand opposing fans' respect. My numbers say Victor Oladipo is worthy of hate, but there's something awesome in his game that makes it hard to really feel it.

Update: The spreadsheet with all the rankings is now available on Google Drive.
Posted by David at 8:27 AM