The second in a hopefully-not-ongoing series.

Stauskamania has taken Ann Arbor by storm, and it's brought a wave of Canadaphilia with it! Tim Horton's locations are popping up everywhere! Not only has Timmie's opened up a 24/7 location on South University, they are starting construction on a new location at S. State and Ellsworth! Most ominously of all, the Tim Horton's website claims the Big House is a Tim's location!


You know what, guys? I can't fake this anymore. If you want to make a big deal out of a guy who's played eight college games, we're cool with that. We like it when 'mer'ca pays attention. We get passive-aggressive when you don't and do things like let Aaron Sorkin name his crappy show The Newsroom when there already was a Canadian show called The Newsroom which was a million times better. And we're not joking when we say that, by having scored 111 points against D-I competition, Nik Stauskas is already a lock for the Canadian Basketball Hall of Fame. (Craig can chime in here and testify that it is, in the literal sense, a hallway.) But we're not cool with the obvious Canadian stereotypes. If you want to impress your Canadian girlfriend, you have to go the extra kilometre and know all the non-obvious stereotypes. When we say "Sorry, eh?" you don't get any cred for noticing the "eh." You get your cred for noticing the subtle vowel shift in the "o."


Bieber? Although I am loathe to slag my hometown bro, we do have other musicians. Some of them are even widely considered to be good! And if you say Nickelback or Carly Rae Jepsen, you'll learn how false the stereotype of Canadian politeness can be. Bieber's not even the best musician from London, Ontario. We have listenable rap in Canada now! And if you can't name ten good musicians from Vancouver, not only should you not be slagging Canada for Nickelback, you really shouldn't be discussing popular music at all.

HOCKEYBEAR is not a bear to argue with success. When I created an army of radioactive ants to destroy the University of Phoenix, not only did they succeed in wiping out all of its locations in HOCKEYBEAR's plane of existence, they breached the very fabric between fiction and reality and caused the closure of 115 Phoenix branches in the universe you small humans inhabit.

So when HOCKEYBEAR fan MGoShoe requested that I follow up my demolition of the University of Phoenix with a rampage of DeVry Unversity, I knew what I had to do. I fueled up my F-16 and set course for the radioactive ant homeworld, where my army of ants had retired after completing their epic destruction. Having built themselves a quiet and tranquil anthill, they were reluctant to return to Earth for this extra mission but agreed on the condition that HOCKEYBEAR provide them with 100 megatons of Earth sugar.

Due to my affiliation with the University of Alaska, HOCKEYBEAR is required to buy American whenever possible. On my way back to Earth, I stopped by the Galactibank to convert enough galactic credits to Earth currency to purchase the sugar. Or so I thought. When I landed in the U.S. to buy my sugar pile, I was ENRAGED to discover that the price of sugar in the U.S. is more than twice its price in Canada!

What could be the cause of this discrepancy? According to the Cato Institute, U.S. sugar prices are artificially inflated to support the corn industry! And what state gains the most from a propped-up corn industry? IOWA. HOCKEYBEAR has always been suspicious of Iowa's mysterious lack of hockey:

And now I learn they game the political process so that their corn industry is protected and HOCKEYBEAR has to pay way too much for sugar! I am ready to RAMPAGE, but which school should I rampage? 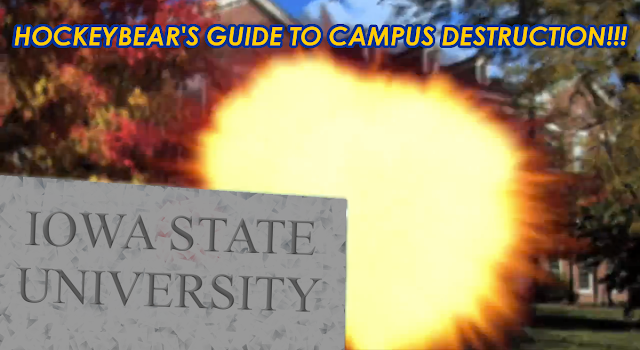 You escape this time, Hawkeyes, because your nickname kind of sounds like "hockey." Also because HOCKEYBEAR wants to make references to The Home Economics Story.

Read more »
Posted by HOCKEYBEAR at 7:46 PM No comments:

How Freekbass woke up the echoes

NIU won the game 40-37 in double overtime and crashed the BCS, overcoming the losing psychology of weasel ex-head coach Dave Doeren, whose bizarre decision to sit on two timeouts at the end of regulation would have been blamed for their defeat.

Dating back to Every Day Should be Saturday's classic "YOUR SCHOOL'S PROMOTIONAL AD IS TEH SUX0RZ" series, every university-produced ad that has been met with howls of derisive laughter from both the university's rivals and disinterested observers has been followed by an upswing in the school's football fortunes. Sitting up on their clouds, the football gods must smile upon schools that don't waste their money on media relations. This is also why the football gods love gritty NFL players from small colleges with cheap ads instead of the glory-boy types from the big-spending schools.