The second in a hopefully-not-ongoing series.

Stauskamania has taken Ann Arbor by storm, and it's brought a wave of Canadaphilia with it! Tim Horton's locations are popping up everywhere! Not only has Timmie's opened up a 24/7 location on South University, they are starting construction on a new location at S. State and Ellsworth! Most ominously of all, the Tim Horton's website claims the Big House is a Tim's location!


You know what, guys? I can't fake this anymore. If you want to make a big deal out of a guy who's played eight college games, we're cool with that. We like it when 'mer'ca pays attention. We get passive-aggressive when you don't and do things like let Aaron Sorkin name his crappy show The Newsroom when there already was a Canadian show called The Newsroom which was a million times better. And we're not joking when we say that, by having scored 111 points against D-I competition, Nik Stauskas is already a lock for the Canadian Basketball Hall of Fame. (Craig can chime in here and testify that it is, in the literal sense, a hallway.) But we're not cool with the obvious Canadian stereotypes. If you want to impress your Canadian girlfriend, you have to go the extra kilometre and know all the non-obvious stereotypes. When we say "Sorry, eh?" you don't get any cred for noticing the "eh." You get your cred for noticing the subtle vowel shift in the "o."


Bieber? Although I am loathe to slag my hometown bro, we do have other musicians. Some of them are even widely considered to be good! And if you say Nickelback or Carly Rae Jepsen, you'll learn how false the stereotype of Canadian politeness can be. Bieber's not even the best musician from London, Ontario. We have listenable rap in Canada now! And if you can't name ten good musicians from Vancouver, not only should you not be slagging Canada for Nickelback, you really shouldn't be discussing popular music at all.


Back to Stauskas. It's not the we don't appreciate the maize-and-blue Maple Leaf flag. We do. It's just we like your attention so much! Since Stauskas is an assassin – no, can't say that, we don't have those and it's culturally insenstive – a killer – no, our killers aren't funny – a very good basketball player indeed from behind the three-point line, you could have incorporated the number three into the flag so easily. For example, you could have used the Pearson Pennant, which came pre-equipped with blue stripes: 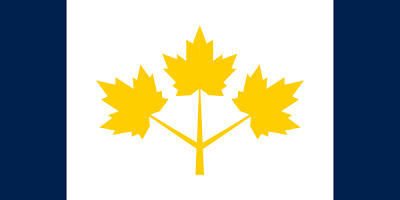 Or you could have noticed that Stauskas's home province, Ontario, has the trillium – a three-leaf flower! – for its emblem, and seen how pretty it looks in maize and blue: 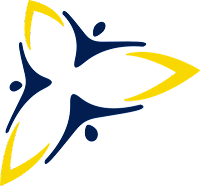 The one thing you can't do is make fun of Mississauga, Stauskas's home town. Mississauga wants attention from Canada the way Canada wants attention from the United States. The easiest way to annoy Mississaugans is to insist that they live in Toronto; although, I think this only works if you're Canadian. If you're American, Mississaugans are quite understanding that you haven't heard of their very large suburb of Toronto. (Disconcerting fact: according to the 2011 Canadian Census and the U.S. Census Bureau estimates for 2011, Mississauga now has a larger population than Detroit.)

Mississauga can't even manage to have a good scandal. The mayor of Toronto can be ousted by a judge over $3,000. The mayor of London faces three federal charges over $1,700. The mayor of Mississauga, on the other hand, can survive any scandal, including conflicts-of-interest over her son's business dealings, and has led the city virtually unopposed since 1978. Unchecked power, has governed forever, and has an less-than-intelligent son? That's right, Mississauga is led by Mom from Futurama:


Once you've got these basics down, we can move on to advanced Canadian studies, like how Bruce Cockburn >>> Barenaked Ladies but the Barenaked Ladies' cover of "Lovers in a Dangerous Time" >>> Bruce Cockburn's original "Lovers in a Dangerous Time," followed by the advanced Canadian irony that the golden age of CanCon was ushered in by a lead vocal sung by a woman from Tacoma and reached its zenith when a band founded by two guys from Houston won the Album of the Year Grammy.

As you embrace Stauskas and all things Canadian, don't forgot the two most important things. First, it's Trawna. It's so cute the way you guys says "TOE-RON-TOE." Second, don't go to the Tim Horton's counter and order "a, um, medium coffee with, uh, two creams, and, er, two sugars." It's a "medium double-double." The new Tim's may be open 24/7, but you don't want to make under-caffeinated Canadians wait that long.
Posted by David at 9:33 PM

I've been there. It is literally a hallway. Also, I could have stolen the Conn Smythe Trophy during my visit, but that is a whole other story.