As we investigate the officials seals of each conference, we should maintain conference rankings. Due to the sheer WTF-ery at the bottom of the B1G, the ACC is currently in first place, with the B1G in second. This week we tackle the SEC. Due to their superior conference speed, I am filing this report from the Canadian Rockies. Even if SEC partisans are filled with rage, I think their speed will fade by the time they get to Alberta, and they also won't be able to bring their guns with them. As we rank the SEC seals, we're going to set some rules as to what makes a good seal and a good graphic identify in the Internet era. 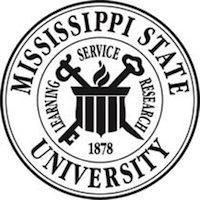 We've actually got a good set of seals down south. MSU's doesn't have anything wrong with it exactly, but its plainness keeps it from standing out. 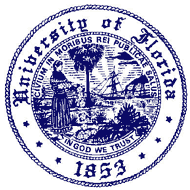 What it's trying to say: We're in Florida with Seminole women and palm trees! Florida!
What it's actually saying: "It looks like a trinket you'd pick up on a cruise."

Seal Rule #1: Just ripping off your state's seal isn't always a very good idea. The symbols of the state often have little to do with academia, and converting a multi-color seal to a single color in this case makes the drawing incomprehensible.

What it's trying to say: We were founded by some dude named Vanderbilt who designed his own shield!
What it's actually saying: Vanderbilt was overcompensating for something when he founded the university.

Seal Rule #2: Even though your seal should only be used for official purposes, there's no point in not putting a high-res of vector graphic version of your seal on the Internet. People like me will figure out what it looks like and misuse it eventually. Having only a low-res seal is particularly bad if you're Vanderbilt, because that low resolution makes the acorn and oak leaf look like something else.

What it's trying to say: We've got a colonnade!
What it's actually saying: We have nothing else of note!

Seal Rule #3: No faux-Roman colonnades. Even if you've got one on your campus, so does everyone else. What it's trying to say: The lawyer and the frontiersman should be friends. One man hikes his hourly fees, the other likes to chop down trees, but that's no reason why they can't be friends.
What it's actually saying: From day one, we have been very confused. 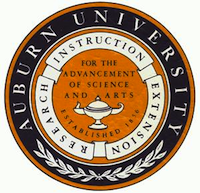 Seal Rule #4: Show, don't say. The creative writing program at Auburn must not be the best. 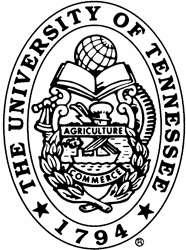 What it's trying to say: We are such a wide-ranging university that we need an oval to symbolize everything we do!
What it's actually saying: Tonight on Hoarders, we feature Holly from Knoxville, who has blanketed every inch of her home with academic symbols, and refuses to keep track of anything.

Seal Rule #5: If you're going to have an open book in your seal, make sure the book has something written in it. Universities are not run by Natasha Bedingfield; they are about reading books that have already been written. Seal Rule #5b: Blank globes are acceptable, especially if your university was established before the entirety of the globe was known. 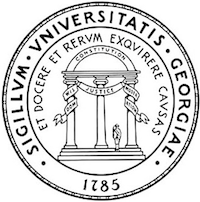 What it's trying to say: Education provides wisdom, justice, and moderation.
What it's actually saying: Speak, friend, and enter. 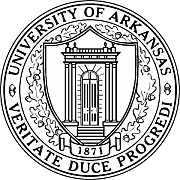 What it's trying to say: Veritate Duce Progredi.
What it's actually saying: They're not sure.

The University of Arkansas's seal was designed by Zelma Rothrock. That name is awesome - I hope she has a relative named David Lee. Using a door on campus as the seal is not so awesome as it violates Seal Rule #6: Don't use a feature of your campus that isn't immediately recognizable as being on your campus. At least it's pretty.

What it's trying to say: "Learning humanizes character and does not permit it to be cruel." That's a Latin motto from Ovid!
What it's actually saying: Either Ovid was wrong or the last 210 years of South Carolina race relations demonstrate that SC's not a very good university.

I promised myself I would only make a "The South has lots of racists" joke if one of the seals left a hanging curveball right over the middle of the plate. Thanks South Carolina for serving up a big fat Latin meatball. (As I hear you're not too fond of the LGBT rights either, South Carolina, I feel I should say "no homo" here.) Also, don't violate Rule #2: sticking "SAMPLE" over your seal won't stop me from making fun of it. It almost stopped me from noticing how cool it was that the state seal was integrated into the university seal as the face of Minerva's shield. That's pretty badass. 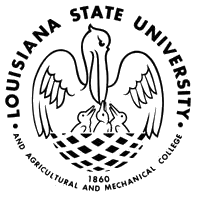 What it's trying to say: We nourish and educate the next generation of young Louisianans.
What it's actually saying: If you just regurgitate what your professors say in your classes, you'll do just fine here.

The cuteness of this seal is inversely proportional to your knowledge of pelican eating habits. As my wife put it, "I'd rather be eaten by a tiger than a pelican." Searching for "pelicans eating" on Youtube is a good way to terrorize your children, because pelicans are essentially flying Sarlacci. This is an exception to Rule #2 as it is a nice seal inspired by a unique state seal. (Although Southern's version is better.) 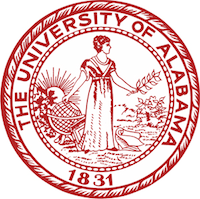 What it's trying to say: I'm not quite sure, but it's something pretty.
What it's actually saying: We have beautiful young women!

Alabama does not violate the rules. Rule #1 was easy to follow because Alabama's state seal sucks. They almost violate Rule #2, but a 300 x 300 copy of their seal is available. No faux-Roman colonnades means Rule #3 is satisfied. Using a faux-Roman Minerva is completely acceptable. As for Rule #4, they are the opposite of Auburn in that they say nothing and show everything. Rule #5 is satisfied because the second page of the scroll has writing, even if the cover page is blank. The seal's not based on a campus location, so Rule #6 is satisfied too. Making the focus of your seal an attractive woman is always a good idea, so Alabama's seal is this week's champion.