THEME SONG
In the not too distant future, Saturday A.D.
There was a guy named Jordan, not too different from you or me
He worked at Schembechler Institute, just another face in a maize jumpsuit
He did a good job cleaning up the place, but his bosses kinda liked him so they made him play in space
(Curse you GERG!)
We'll send him speedy runners, the best we can find
He'll have to stop, tackle them all as we monitor his mind
Now keep in mind he can't control when the games begin or end
He'll try to keep his sanity with the help of his D-Line friends...
D-LINE ROLL CALL!
Martin! (I'm Captain!)
Heininger! (Left side!)
Van Bergen! (Where've you been?)
Rooooooooooooooooh! (I'm sophomore!)
If you're wondering how he eats and breathes and other science facts
He's got a meal card and it's set on earth so you can really just relax
For Michigan Defense Theater 3000.
INT. SATELLITE OF YOST
JORDAN
Hi, everyone and welcome to the Satellite of Yost. I'm Jordan Kovacs and I'm usually accompanied by my pals Roh and Van Bergen, but I don't see them around right now. Martin, can you get me Rocket Number 9?
Rocket Number 9 shows MARTIN, HEININGER, VAN BERGEN, and ROH holding off a disorganized horde of invaders of Minnesota. The horde retreats, and VAN BERGEN and ROH enter the Satellite of Yost.
JORDAN
Wow, guys, that was impressive. I hardly even knew there was a game on.
VAN BERGEN
Well, we do try and make it easy for you. Look, the Mads are calling.
JORDAN pushes the red button.
JORDAN
Hello sirs, what horrible torture do you have in store for us today?
DREW SHARP
Our invention this week will drive a stake through the heart of the career of your beloved co-ordinator, Greg Mattison. We've uncovered evidence that for the past three years, Mattison has been paying his players openly and brazenly.
JORDAN
But sirs, Mr. Mattison spent the last three years in the NFL. They're allowed to pay the players there.
TV'S GERG
But according to our anonymous source Jerry Richardson, players in the NFL aren't allowed to be paid either.
DREW SHARP
You moron! Do you even know what "anonymous" means?
DREW hits TV'S GERG repeatedly with a film reel.
JORDAN
That's really interesting, sirs. Our invention this week is something called a "tackle." Allow me to demonstrate on Van Bergen here. You take your arms, wrap them completely around the person you wish to "tackle," [JORDAN wraps his arms around VAN BERGEN] and then, depending on your orientation, push or pull that individual to the ground. [JORDAN tackles VAN BERGEN] We think that "tackling" can really help our defense!
TV'S GERG
That's incredible! We can use that to keep opposing teams from scoring touchdowns!
DREW SHARP
[To TV'S GERG] The only thing I'll be using it for is causing you a lot of pain! Anyway, Jordan, this week's experiment is called Persa-A-Go-Go, but before that we have a special short called Zook People.
Lights start STROBING and FLASHING in the Satellite of Yost.
JORDAN, ROH and VAN BERGEN
We've got game film sign!!!
JORDAN, VAN BERGEN, and ROH enter the THEATER through a sequence of numbered doors. Zook People begins.
CUT TO:
INT. MEMORIAL STADIUM, CHAMPAIGN, IL 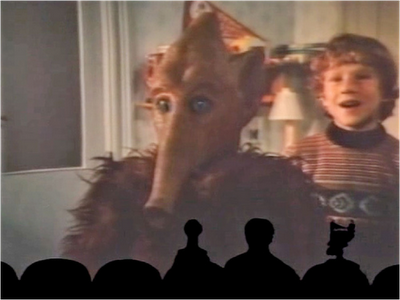 TRUMPY accumulates 119 yards on 23 carries against Boston College and Army.
PAT FITZGERALD
Wow, Trumpy, you can do magic things!
TRUMPY
I like potatoes!
PAT and TRUMPY go to Champaign, Illinois.
PAT FITZGERALD
Now, Trumpy, be careful, we wouldn't want anybody to get hurt.
TRUMPY
Like hell, more food!
TRUMPY sticks his foot awkwardly and tears his ACL. Accompanied by the strains of "Idiot Control Now," RON ZOOK's Illini make up an 18-point deficit to win 38-35.
PAT FITZGERALD
It stinks!!!
JORDAN, VAN BERGEN, and ROH return from the theater to the Satellite of Yost.
INT. SATELLITE OF YOST
ROH
Wow, we are really lucky that Northwestern's top running back got hurt the week before we play them.
JORDAN
We are lucky, but what do we say when an opposing player get injured?
VAN BERGEN
Huzzah!
JORDAN
No, no, no, what we say is that it's really sad.
ROH, HEININGER and VAN BERGEN
Huzzah!
JORDAN
No, we don't cheer other players getting hurt. [Lights start strobing and flashing] We'll talk about this later, we've got game film sign!
JORDAN, VAN BERGEN, and ROH return to the theater. Persa A-Go-Go begins.
CUT TO:
EXT. BRISTOL, CONNECTICUT
NARRATOR
It appeared suddenly one day near the small, idyllic, town of Bristol, Connecticut. A giant monster, 14 feet high and 48 feet wide, had taken up residence on the side of the road. 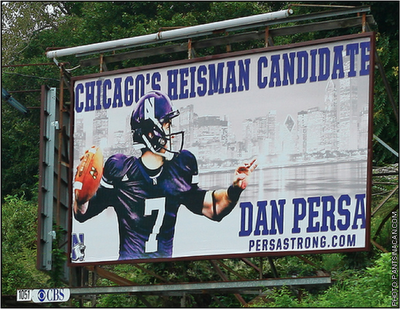 ESPN.COM WRITER JAMES QUINTONG
I was driving home from work, and suddenly, there it was, just sitting there, begging for me to pay attention to it. I didn't want it to think I was an easy catch, so I just kept driving past it.
NARRATOR
It claimed to be named "Dan Persa" and it claimed it was a "Heisman candidate." Yet no record of a Dan Persa playing college football in 2011 could be found.
ESPN.COM BLOGGER ADAM RITTENBERG
I searched high and low throughout the Big Ten for Dan Persa, as he supposedly played for the Northwestern Wildcats. I almost had him captured once, but he escaped and somehow completed a getaway.
NO FOOTAGE of PERSA's capture or escape is shown.
NARRATOR
As if a switch had been turned, as if an eye had been blinked, as if some phantom force in the universe had made a move eons beyond our comprehension, suddenly, there was no trail! There was no giant, no monster, no thing called "Persa" at the side of the road. There was nothing in Bristol but the puzzled men of courage, who suddenly found themselves alone with shadows and darkness! With the telegram, one cloud lifts, and another descends. Quarterback Dan Persa, rescued, alive, well, and of normal size, some eight hundred miles away!
Footage of PERSA leading Northwestern to a 28-10 lead over Illinois is shown. The film then ends abruptly. JORDAN, VAN BERGEN, and ROH leave the THEATER.
INT. SATELLITE OF YOST
JORDAN
Wow, that was weird, huh?
ROH
Jordan, do you think that Persa creature is real? He looks like he could be really scary.
JORDAN
Oh, I don't know if he's real, but if he is real, I know we're up to the challenge. Right, Van Bergen?
VAN BERGEN
Right! If he's that big, he should be easy to tackle.
JORDAN
Well, what do you think, sirs?
CUT TO:
INT. FREEP 13
DREW and TV'S GERG are wearing "I'm a Virgin" T-shirts.
DREW and TV'S GERG
It stinks!
CLOSING CREDITS
Thanks to the authors of the FIRST AMENDMENT and the TEACHERS OF AMERICA. Keep circulating the TAPES. The closing credits end with a STINGER. 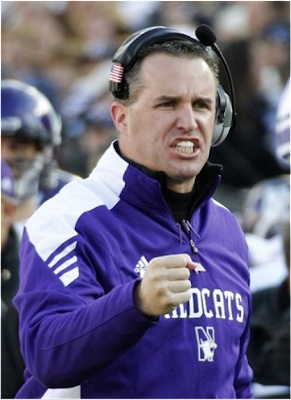 PAT FITZGERALD
It stinks!!!
Posted by David at 9:32 AM

Email ThisBlogThis!Share to TwitterShare to FacebookShare to Pinterest
Labels: maybe brian cook will get this pop culture reference, michigan defense theater, mst3k, northwestern, this is what happens when the Man won't let me work

I am rarely moved to comment on strangers' blogs, but I have to tell you: this was some brilliant, brilliant shit.