Seal Block Week 8: The MAC is jammin' with Moxy Fruvous

The Mid-American Conference is looking for offhanded ways to improve the lives of communities in the north-central United States. Under their own volition, they took up their position. They are incapable of making references to the song by The Tallest Man On Earth with the same name. 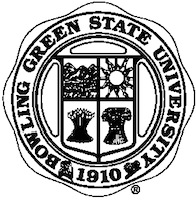 13. Bowling Green
What it's trying to say: We've got grain and sun and arrows and mountains!
What it's actually saying: Mountains????
A PR blog favorably compares BGSU's graphic identity standards to those of nearby Toledo's. We'd like to remind everyone that a graphic identity is more than just a seal, and, since the seal is only used in official situations, it is frequently not considered part of the graphic identity. That's why we see BGSU here and Toledo much later, because Bowling Green's seal is pretty terrible. Mountains? Really? Mountains? 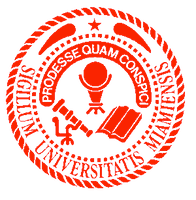 12. Miami
What it's trying to say: "To Accomplish Rather Than To Be Conspicuous."
What it's actually saying: An attractive seal would be conspicuous.
Do you know what else is inconspicuous? Calling yourself "Miami University" and then locating yourself in Ohio. No one's expecting that. Make a better seal and I'll make better jokes. 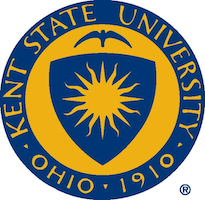 11. Kent State
What it's trying to say: It's the 1960s, and we're moving on up in the world with this modern 1960s design.
What it's actually saying: Please ignore the history of our institution after 1969.
The bird above the shield is a chimney swift, and was put on the seal in 1964 to honor Prof. Ralph Dexter, whose research on chimney swifts symbolized KSU's aim at being a renowned research institution. Apparently the 1960s were a promising time for Kent State, but their seal as a whole belong with Purdue's in the "Only the '60s could have produced this" file. 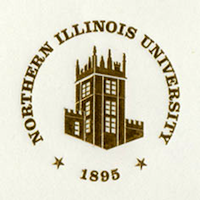 10. Northern Illinois
What it's trying to say: We've got a tower!
What it's actually saying: We've got a tower!
I can't make jokes about Northern Illinois for the same reason that many people can't make jokes about Kent State. As part of my research into PTSD, I've discovered that the 2008 school shooting at NIU was a boon for the psychology department, as they had collected data on over 900 students earlier that school year. After the shooting, the planned study became a longitudinal PTSD study, with a rare complete set of pre-event data. You don't get to deliberately traumatize students if you're a research psychologist. Bonus psychology fact! A set of questions where you are asked to rank statements on a scale from 1-5, where 1 is "strongly disagree" and 5 is "strongly agree" is called a Likert Scale. 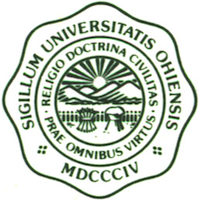 9. Ohio
What it's trying to say: Above all, virtue.
What it's actually saying: Above all, farming.
Ohio gets a bit of a pass on the mountains because it's in Southeast Ohio, and the background could be Appalachian foothills looking towards Kentucky and West Virginia. There's also a fence, leading to the question: who is being kept out by the fence? Ohioans, Kentuckians, or West Virginians? In front of the fence, the seal makes the bold statement that there's agriculture in Ohio.

8. Eastern Michigan
What it's trying to say: Exciting, excellent, exemplary education exists at Eastern.
What it's actually saying: If you seek a pleasant peninsula, look in other parts of the state.
EMU's seal is a modified version of the state seal of Michigan, with the word "Equity" replacing the word Tuebor (Latin for "I will defend"), and a book and torch replacing the state motto and a picture of an explorer by a lake. So it's educational! And fair. It's kind of weird that they wrote words on the bottom of the pages instead of on the pages themselves.
(Discovered while researching this entry: the Ypsilanti water tower did win a contest to be called the World's Most Phallic Building.) 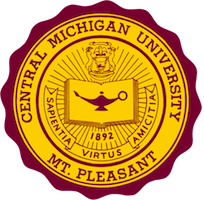 7. Central Michigan
What it's trying to say: We've got books filled with all sorts of knowledge!
What it's actually saying: We've got picture books filled with all the sorts of knowledge that can be communicated without the use of language!
Fun fact: if you add the word "President" to the bottom of the seal, you get a medallion that can only be worn by CMU's president. And by fun, I mean, other than CMU's president, who cares? 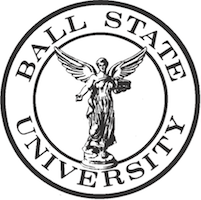 6. Ball State
What it's trying to say: Beneficence.
What it's actually saying: There is absolutely nothing else on campus of note.
Beneficience, or "Benny," is the last major work of famed sculptor Daniel Chester French. From Wikipedia: "It also has been said that Benny cries tears of blood when a virgin graduates from Ball State." They really should have worked that into the seal somehow - Letterman would have. 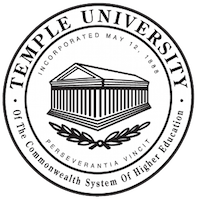 5. Temple
What it's trying to say: Is it Greek, Hebrew, Buddhist, or Mormon? It's Greek.
What it's actually saying: Greek temples predate Giotto. That's why the perspective's slightly off.
Well, that's the right thing to do if you're Temple. The only other option is to make a seal out of a Cosby sweater. That would not look good. What would look good is replacing the T on their football helmets with this temple. 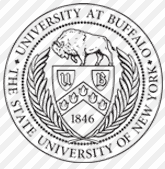 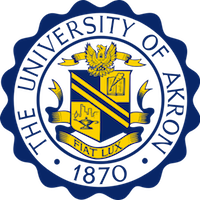 3. Akron
What it's trying to say: The University of Akron provides a classical education in a modern, up-to-date city.
What it's actually saying: I find it hard to believe, but they actually said what they were trying to say.
I have to admit, Akron was not the city I was expecting to see successfully fit a skyline onto its shield. As the Pac-12 shows, you can't go wrong with Fiat Lux as a motto, though if they wanted to update it, they could easily replace it with Fuck LeBron, or, in vulgar Latin, Futue Lebronus. Oh yeah, the rising phoenix coronet is pretty cool also. 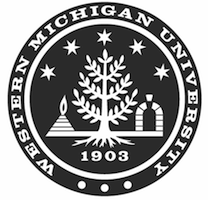 2. Western Michigan
What it's trying to say: We are continually growing as a university.
What it's actually saying: You know, other universities, maybe not using the lamp of learning and inventing some new symbols for academia might be kind of cool?
Big ups to John Kemper for putting the roots of the tree on the seal to symbolize growth and stability, and for emphasizing that the pursuit of knowledge is incomplete with the unfinished stone arch. 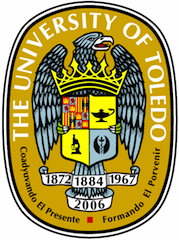 1. Toledo
What it's trying to say: Once I was the King of Spain, hey Obama, hey Putin, got problems, you phone me!
What it's actually saying: Now the Wings call me up to drive the Zamboni!
The designer of Toledo's seal had two big problems to overcome. First, Toledo is in Ohio - fortunately he/she had the good sense to avoid putting mountains in for no reason. Second, Toledo's best-known industrial product is transparent glass, which is hard to symbolize. One easy solution to both these problems: pretend you're in the original Toledo! The basic seal design is a straight rip-off of Ferdinand and Isabella's coat of arms (their shield is in the upper left of the Toledo shield) and that's 100% pure Castilian awesome.
If Toledo needs to improves their graphic identity, they can start by making their awesome seal more easily available. It was a total pain to find online. The Hoover Street Rag is now the Internet's leading source for finding this seal.
Conference rankings after Week 8: The MAC restores the honor of the non-AQ conferences with a solid 5th place showing, but next week it's back out West to the WAC where we'll see the worst. seal. ever.
Posted by David at 7:45 PM

The picture (mountains, fence, agriculture) on the Ohio University seal is from the state seal of Ohio.

Ah, it's Chillicothe and there's a mountain there. That is acceptable. But why did Ohio U. add a fence? There's no fence on the state seal.

Most versions of the seal don't have a fence, but OU added one. The only version with a fence is the Ohio Senate version, and you have to squint to see it.