Thanks everyone who voted for the Seal Block Top 25 and for everyone who slogged their way through 14 weeks of exciting academic symbolism! Before revealing the final poll results, I'd like to award a couple of special jury prizes. I looked for 126 seals and some schools make it easy to find and some make it almost impossible. The first special prize goes to Buffalo for the most sensible protection of their graphic identity. The gray stripes mean that an interested party can see it clearly, but can't pass it off as official. Emblematic of the wrong way to protect your identity is South Carolina, who has a great seal but makes it impossible for anyone to appreciate it. SC was disqualified from the Top 32 due to this crappiness. (Penn State was also disqualified from the Top 32 because it was, quite literally, the least I could do.) Penn also deserves mention for their clever bait-and-switch: their shield is based on the Penn and Franklin family coats-of-arms and is used on their merchandise. It's widely considered to be their seal, but their actual seal is the seven books of the liberal arts. The trivium and quadrivium: the original 3-4 defense against ignorance. 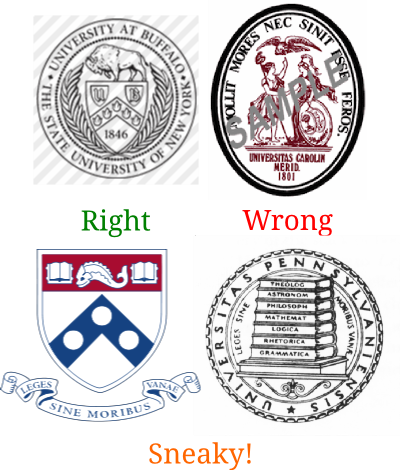 The second special prize goes to the most badass seals I found while searching. In third place is the U.S. winner, Davidson College, for featuring the brutal murder of a snake. Second place goes to Sweden's Lund University. It's a lion, wearing a crown, holding a frakkin' longsword. He's reading the Cabela's catalog in order to devise the most up-to-date countersafari techniques. "Do you know what those poachers won't be expecting?" he's thinking to himself. "A pride of lions armed with swords!" The year 1666 was a good year to be founded because years containing "666" are inherently badass.

It may be my Canadian jingoism showing when I declare Nova Scotia's Dalhousie University the winner, but no, that's some serious badassery. Dalhousie's named for its founder George Ramsay, 9th Earl of Dalhousie, and their shield and coronet, consisting of the eagle, crown, and unicorn head, comes from the Ramsay family coat of arms. For the Ramsays, the shield is supported by a gryphon and a greyhound, but, at some point, Dalhousie officials said, "To hell with that! That's not badass enough. We're adding some freakin' dragons." And so they did. They also get bonus points for using the only nonconfusing Latin abbreviation of a placename in North America.

24. Western Michigan
Its roots are showing,
but the tree of wisdom should
have its roots showing.

22. Tulane
A football-shaped seal’s
a better idea when
your team’s not awful.

21. Toledo
If in Ohio,
It’s best to pretend you’re not.
Toledo’s in Spain.

20. Akron
A rising phoenix
born in the ashes of Le-
bron’s reputation.

17. Hawai'i
Haiku is a poem
And a town on Maui too.
Malamalama.
(Haikus are much easier
to compose in Hawaiian.)

11. Memphis
The new Memphis seal
is both classic and modern.
Horus salutes you.

10. Boston College
The Jesuits know
Boston once had a hill that
was called Mount Whoredom.

9. Notre Dame
Ronald Reagan said,
Let’s win one for the Gipper.
They finished in ninth.

8. Georgia Tech
We hate UGA.
We stole the door from their seal,
added a cool gear.

7. Michigan
The most successful
color scheme in all football.
Easterbrook approves.
(But he is still a jackass
who writes the same thing each week.)

5. Alabama
The girl in the seal
is really a nurse at Saint
Saban Hospital.

4. Oregon
Mount Hood is pretty
but can’t be seen from Eugene.
Maybe Beaverton.

1. Army
Eagle with arrows,
Stolen from the Iroquois,
But still really cool.

Only one point separated Army & Navy in the final vote, so if you don't like the result, it's your own fault! In the spring, we will not be ranking the seals of D-I basketball, because I am not crazy enough to do that.
Posted by David at 8:08 PM