If you haven't already done so, be sure to vote for The Top 25 university seals! We will announce the results a week from Wednesday. In the meantime, we take you on a grand tour of the dregs of academia as we celebrate the Worst Seals in the World!!
Imagine, if you will, a universe in which the Stanford Tree goes off and establishes its own college. You don't have to imagine very hard, because the resulting college would be roughly the same as Evergreen State College, the winner for worst overall seal. Its motto is omnia extares, or "let it all hang out." I believe the concept behind this seal is that the drawing is supposed to represent a childlike sense of discovery and wonder. However, it more accurately represents a childlike inability to draw and/or use an Etch-A-Sketch. I think the student body at ESC is quite content with their seal, but they could do much better by commissioning their most famous alumnus, Matt Groening, to draw a new one. If they want a drawing done without lifting the pen, they could go with this one. 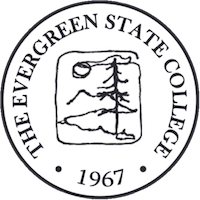 Despite being (deliberately) poorly executed, there is an OK concept behind Evergreen State's drawing. Some schools just started out with a bad idea, and they are the winners of the Worst Concept award. In third place is Bethune-Cookman University, who took the New Mexico State triangle concept and ran with it. The three dates honor the founding of Bethune (1904), Cookman (1872), and their merger (1923), and the three words indicate that you'll get three-quarters of the education you'd get at a 4-H club. In second place is Central Florida for its previously-discussed Nyan-Horse design. But the winner in this category is Governors State University of Illinois for its circle and triangle, which may be intended as a top view of the Space Needle. I think that the governors of Illinois were too busy selling Senate seats and government contracts to worry about graphic design.

An early front runner for worst concept was Oakland University for what appears to be a blank piece of paper. However, upon further research, we discovered that the piece of paper is actually intended to be Ulysses's sail from The Odyssey, which is actually a pretty good concept. So Oakland wins the special prize for worst execution to concept ratio. 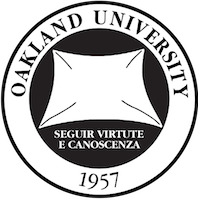 Our first reader nomination came from Joe, who nominated the University of Somalia in the category of Worst Font for having "not a terrible font, but a terrible font for a university seal." Unfortunately the university was shut down in the mid-1990s chaos so I wasn't able to confirm if this was a legitimate official seal. However, it was still good enough for second place behind Colorado's wacky bubble font. In third place we have Macalester College as a representative of the modern trend of using a sans-serif font when a serif font would be much better. When you have a classical scene with a woman, you can cover her breasts with a shirt or justify the scene as "classical" with serifs in your font. Sans-serif just makes it look naughty.

While Macalester's topless woman is an unusual symbol, it's not completely out of place in a Minnesota college's seal. In the category of Most Incongruous Symbol, we consider symbols that truly are completely out of place. In third place is the College of St. Elizabeth of Louisiana New Jersey, whose seal features a pelican in her piety. While this is an ancient heraldic symbol, in the US it has been co-opted and become a symbol of Louisiana. Still, it's not as out of place as the waves at the base of Bucknell's seal, a very odd choice for a university in the West Branch Susquehanna Valley. First place goes to the University of Findlay, which has taken Ohio's obsession with including mountains to the extreme. The Great Seal of Ohio contains a view of Mount Logan near Chillicothe (Thanks to reader M Fanfare for researching that), but Findlay has somehow expanded that into a raging river flowing through the cordillera of northwest Ohio.

"Bucnellensis" is a ridiculous sounding Latinization of a word and would be a winner in the Worst Use Of An Ancient Language category if we weren't trying to avoid repeat winners. Reader Mark nominated Harvard for its division of one word across three books. This is a common feature of university seals, but that doesn't make it any less silly. In second place is Middlebury College of Vermont, which included so many Latin abbreviations that it's almost impossible to know what college it represents. The winner in this category is Tufts University, whose Latinized form "Tuftensis" is even sillier than "Bucnellensis." A special mention goes to the now-closed Northwestern College of Watertown, Wisconsin, for coining the ridiculous word "Watertowniensis." Would it have been so hard to translate "Watertown" and get "Aquipolitanum"? 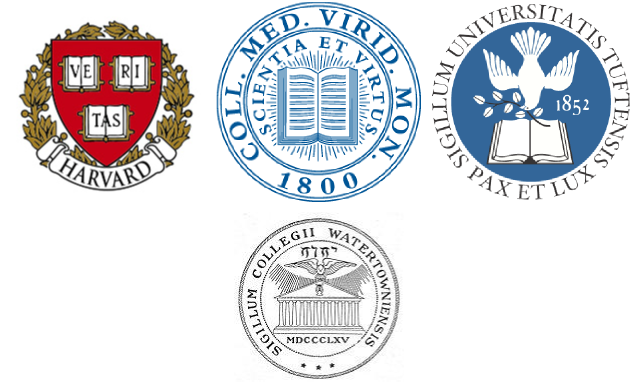 Among FBS schools, boredom was epitomized by BYU, whose seal is just its acronym. Third place Cal Poly Pomona manages to combine boring and confusing with a strange black-and-white depiction of its ceremonial mace. We considered several schools with boring colonnades on their seals for second place, including Mississippi and Central Washington, but ultimately awarded the place to the College of Charleston, where they've had 241 years to come up with something better and failed. They couldn't even win Most Boring, as relative newcomer CSU-Dominguez Hills, best known as home to the L.A. Galaxy, takes the category. They did something with semicircles and left it at that. I'm not sure what it's supposed to be. 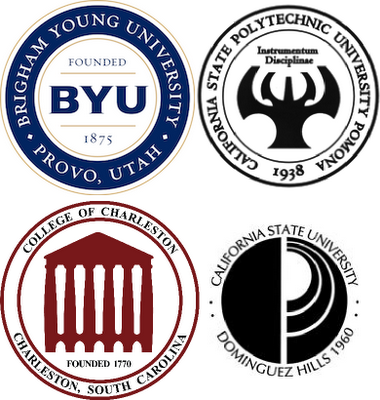 Reader Mark also nominated Roxbury Community College of Massachusetts for the unlikely combo of Most Boring and Creepiest. He writes, "The adult is looming over the younger person (child? malnourished teen?), showing no regard for personal space, and doing God knows what under whatever putative table that book is sitting on. The lack of content in the book is similarly worrisome, either as the smaller person is focusing on its blank pages to push back the pain or looking at something so filthy that it can't be reproduced." After such a description I could never consider this seal to be boring, but it runs away with this category thanks to its incredible creepiness per gallon of ink ratio. The terrifying unblinking eyes of Wisconsin and Colorado State take second and third, as their creepiness required careful attention to detail.

While Roxbury packs a ton of creepiness into just a few lines, some other schools went way in the opposite direction and produced the Most Needlessly Busy seals. In third place is Nebraska, who compartmentalized everything that UNL has to offer into seven sectors, which is about three too many. In second place is Florida, who converted the state's Great Seal into a two-color monstrosity featuring a densely filled-in blue foreground on a lightly filled-in blue background. However, the winner in this category is Dartmouth, whose seal is so complex that they have a simplified version that is still ridiculously busy. A voice yelling from heaven, a mysterious triangle with Hebrew writing in the sky, flowers and a stream in the foreground. No detail was spared, and many details should have been.

Busy seals have the redeeming quality of being somewhat timeless, a quality not found in the Most Outdated seals. In third place is Kent State, where they have good reason for pretending it's still 1969. Purdue, on the other hand, was neither founded in the 1960s and has accomplished much since then, so there's no reason for them to remain frozen in time. Winner Pitzer College in California was founded in 1963 but its motto of "Mindful of the Future" contradicts its seal, which is very clearly stuck in either the past or underneath the Party Tree of Hobbiton.

No school deliberately tries to have a funny seal, but there are several outstanding nominees for Most Unintentionally Hilarious seal. Oregon State takes third place because their seal predates the reason that it's funny and it's not really their fault that the Minnesota Educational Computing Consortium came along and ruined everything for them. In second place is NYU, where they chose to depict the aspect of Greco-Roman tradition most hilarious to modern sensibilities, the nude racing. Without the laurel, this is either the Naked Mile or the Undie Run without the undies. Even though it provokes juvenile giggling, the leaders of NYU have made a conscious decision to ignore the callow humor. On the other hand, the first place winner in this category, Union College of Nebraska, probably has no idea what's so funny about its seal.

To conclude we honor seals that didn't really fit into any other category and are thus honored as being the Wackiest seals. Calvin College seems to be commemorating Mola Ram in The Temple of Doom by serving up a heart on a hand. They also forgot to include their's school's name. Union College of New York went with Minerva pushing her helm above her head, but the helm doesn't seem to have any eyeholes, making it the winner for Worst Hat. Carleton College's seal depicts a flying Bible illuminating works of classical knowledge, or maybe the Bible is in the process of attempting a table stunt on Greek tradition. Either way, flying Bibles are wacky!

Next week we reveal the Top 25 seals. Be sure to vote if you haven't already!
Posted by David at 7:21 AM