Due to the recent email messages that have come to light, Dave Brandon has taken a leave of absence from responding to his email from various alumni and season ticket holders. In his stead, a number of guest authors have taken his place.

In the long history of my Michigan fandom, I have never been as disappointed in my alma mater as I am right now.  Not for the on the field product, but rather for the continuing litany of gaffes, both small and significant, that the athletic department seems committed to making on an almost daily basis.  I will not be renewing my tickets next year after 35 seasons as a season ticket holder and donor.

Pray tell whatever gaffes do you speak of for this great Meeechingan of ours?  While mistakes have been made, they have been made doing the great things, trying the bold and the innovative, creating a tradition and a future of which all Meeechigan men can be proud.  We hope that our new commitment to the moral benefits young men receive from playing foot ball will bring you back to Ferry Field next fall.

My family and I have been season ticket holders since the early 1970's, and it pains me to say that we won't be renewing them this year. The price of the tickets, plus the "voluntary" donation, is just too much for us to bear on our fixed income, as my wife and I recently retired. Michigan Stadium has been so important to us, but squeezing every last cent out of the fan base has left us cold. We feel left out of the Michigan family.

DISRESPECT. You feel left out? How dare you. I bet you don't respect football enough to earn the right to buy these tickets. This is a game for men, and men do what it takes to get the job done.

I've been going to football games at Michigan Stadium since I was a young boy, so I've been through the lean times and the good times. But I can't say I've ever seen such a sorry stretch of football.  The RichRod years were a disaster, and hiring Brady Hoke has just made things worse. Until things change, you won't be seeing me on Saturday and my donations will go somewhere they make a difference.

I think you're aware of my policy. I'm going to need you to bring me something from the dictionary for us to continue this conversation.

My word is "autoclave". An autoclave is a pressure chamber used to sterilize equipment and supplies with high pressure steam.

Thank you.  I appreciate your letter, and I've given it a lot of thought.  It sounds to me like you and Michigan football aren't on the same page. If you want a situation where you can be #1, maybe you should transfer your allegiances to someplace more suitable. Central or Eastern would definitely appreciate you, or any other non-Big Ten institution would be acceptable to us. I've attached the transfer paperwork to this email.

PS: If you change your mind and commit to sticking it out, I have a group of young men who run the stairs every morning. It's tremendous.

It has occurred to me the test of a first-rate intelligence is the ability to hold two opposed ideas in the mind at the same time, and still retain the ability to function. One should, for example, be able to see that things are hopeless and yet be determined to make them otherwise.  So here's to hoping for bowl eligibility.

I suggest, once again, you quit drinking and go to bed.

I'm sick and tired of the athletic department rolling out these idiotic schemes and then having to walk everything back when the students and the alumni get wind of them. The noodle, the Coke incident, and the student ticket policy were just foolish.  Getting stuck with playing MSU and OSU on the road every other year is actively detrimental to our success and the athletic department's bottom line. Please be less embarrassing.

Well, the noodle...I haven't been fully informed about that.  The Coke thing was something from the marketing...their marketing department which we never approved. The student ticket policy, I've been told that they're OK, just an ankle thing, though we don't usually comment on injuries. I don't think we're playing them both on the road every year, just this time. We wouldn't do  that every other year. Anyway, it's all part of big boy football.  I love our kids, we're just going to go out there and compete.

I think the time has come that you have to let Brady Hoke go. The mismanagement of the Shane Morris injury is the last straw for me. I would say anything less than 8-4 and you have to fire him anyway, but leaving a kid in there after a shot like Morris took is just unacceptable.

The first thing you have to understand is that Adreain Payne has a child's lungs. He can't go like some of the other guys, he just gets gassed. And Gary Harris is out there playing on a wooden pirate leg.  Drew Neitzel has alopecia, and that lack of self-confidence really impacts his game.  Goran Suton is from a different galaxy and he's just getting used to Earth's gravity, so you have to be patient with him. Draymond Green, he gives everything he's got on every play, but he's playing with seal flippers sewed to his arm stumps.  What I'm trying to say is we're pretty banged up, and the refs don't give us the calls because we're Michigan State.

PS: Next year I'm dressing up as Jason Bateman in Teen Wolf Too! The kids are going to go nuts!

After all the price increases and embarrassing incidents, I don't think you have what it takes to be the athletic director at the University of Michigan. Do everyone a favor and quit now, so the university can save the outrageous three million bucks in your buyout.

I regret to inform you that we cannot answer your recent email. Coach Hayes is already quite incensed that it made it past his spam filter and has destroyed several chairs and a down marker; I suspect your use of "bucks" is what allowed it to slip through. He has had me print it out and burn it, his computer, and our servers, after which the ashes will be couriered to the state line and dumped, as Coach Hayes is loathe to pollute our fair Ohio with such detritus from That School Up North. Please accept this letter as my personal apology.

For all of Michigan's marketing of "legacy" and "history", the future which you so claim to love looks bleak and foreboding.  What steps are you taking to bring Michigan back to the pride of the good old days?  I hope you have a plan and a vision, because right now, it's as dark as midnight round here.

Hopeful for the future,
Sherman Williams 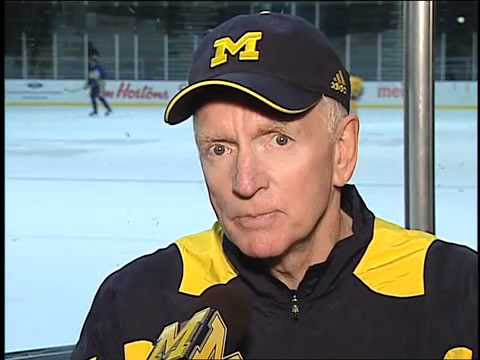 I've renewed my football season tickets and applied for hockey season tickets. I cut the grass, did the laundry, cleaned the house, helped my kids with their homework, paid my bills, balanced my checkbook, did my taxes, and rescued a puppy. I hope this is satisfactory.