(Author's note: This is late, in part because The Daily's Alejandro Zúñiga already had used my premise I had devised in my head for what I was going to do with this column and then did an awesome job with it.) 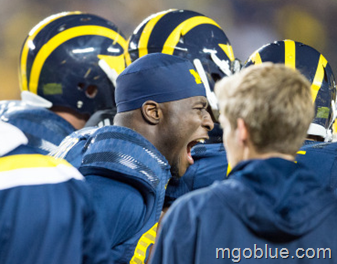 In the end, maybe, some times, you just need to dance it out.  And that's OK.  It's hard to dance with the Devil on your back, but if you can shake him off, you can find yourself in a position to find the joy and the happiness that football should bring, playing for yourself, for your teammates, well, maybe that's all that matters.

This win is one win, as the cliche goes, and it is not going to be a season changer, necessarily.  But it was necessary because it does actually take some things off the table.  To wit:


Now, you may say that these are at best small victories, cold comfort, but I think they're important.  When you're in a hole, either you keep going deeper, or you start digging out.  I don't know what this game will ultimately mean, Michigan still has a metric ton of problems to sort out among itself.  But it's a start.  In this way, it's necessary, because it moves the conversation for the bye week to "Well, maybe it's not as dark as we thought."  Again, in a season like this, take the victories where they come.

In the end, we won.  Alright. Hey. Alright. Good job, guys. Let's just not come in this Saturday. Let's just take a day. Have you ever tried shawarma? There's a shawarma joint about two blocks from here. I don't know what it is, but I wanna try it.
Posted by Craig Barker at 9:30 AM