Let no one say that HOCKEYBEAR is not a supporter of non-traditional education, especially since I have a non-traditional education myself. You small humans may know that the traditional education for terrestrial polar bears is very basic -- essentially just swimming lessons and a reminder to cover your nose while stalking prey. For space polar bears, the level of education is more advanced. We need to cover Bernoulli's principle and other basics of fluid mechanics, flight school and aerodynamics, and, or course, hockey. HOCKEYBEAR's education is non-traditional because I have obtained several advanced degrees in order to gain the knowledge necessary to have a successful career in epic destruction. I have Ph.D.s in aerospace engineering, optics (for laser hockey stick building), civil engineering (to know the weak points of structures that need to be destroyed) and vulcanology. I also have numerous honorary degrees; I am most proud of the day when UAF granted me an honorary MFA -- MASTER OF FRAKKIN' AWESOMENESS.

Despite HOCKEYBEAR's overwhelming support for education, both traditional and non-traditional, I am ENRAGED by many of the schools that provide non-traditional education in the United States. While I think there is nothing wrong with wanting to have a comfortable career in teaching, HOCKEYBEAR thinks for-profit education always goes wrong for a simple reason. The sort of human who decides to start a business on the model that "People don't know things they need to know. I want to make millions of dollars off of that" is a jerk. And, because that human is a jerk, he/she will decide to do other things like instruct recruiters to mislead potential students about the costs and benefits of attending his/her school, maintain extremely low graduation rates, extract millions of dollars in loans that eventually default from the federal government, and cheat on standardized tests.


The problem with destroying for-profit universities is that they open numerous campuses across the country, and so HOCKEYBEAR's methods for destroying traditional campuses would result in far too much collateral damage. However, their destruction is required, so HOCKEYBEAR will have to get creative. University of Phoenix, prepare to meet you're doom! 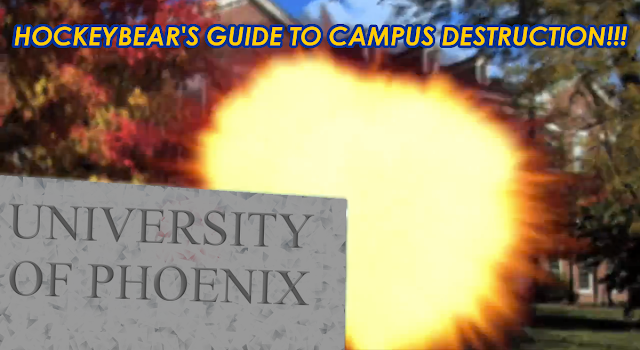 Crime: That's for the law to decide

So I'll start my rampage by flying down to Glendale, Arizona, where I'll attach a tow line to University of Phoenix Stadium and carry it off for repurposing. (The Pat Tillman Memorial Plaza will, of course, remained untouched.) Using thermonuclear power to recycle the stadium materials, I will unveil HOCKEYBEAR's most destructive creation yet: the Annihil-phoenix.

While the Annihil-phoenix will have numerous uses in HOCKEYBEAR's future destructive missions, for this mission I do not need one large machine to destroy one large campus; instead, I need the nuclear waste to construct the army required to destroy 102 campuses and 157 learning centers across the country. And what shall that army be composed of? Ants, super-intelligent, radioactive ants.

HOCKEYBEAR's army of radioactive ants will spread across the country, devouring any University of Phoenix property they come across, while leaving neighboring buildings and businesses intact. Once all 259 locations are destroyed, the ants will return to Phoenix, where they will consume the headquarters of the Apollo Group, UPX's parent company. Having completed their mission on earth, HOCKEYBEAR will load up all the ants on his jet and take them to the radioactive ant homeworld, where they will live out their lives in peace and tranquility.

HOCKEYBEAR has contingency plans in place in case Feeney-X, the University of Phoenix's superhero protector, attempts to stop this plan. Fortunately, I believe his multimillionaire alter ego is too busy running for President right now, so this destructive mission should go according to plan.

Postscript. HOCKEYBEAR and Killface are a lot alike. We're both completely white, we both go around naked most of the time, and we both make weapons of mass destruction. But mine work, dammit!

Next time: HOCKEYBEAR pays a visit to the most notorious cheaters in NCAA history, the California Institute of Technology.

HOCKEYBEAR is a renowned primeval force of destruction known for his appearances in University of Alaska hockey intro videos. When not traveling across the galaxy destroying planets and stars, he lives in Fairbanks and supports his hometown Nanooks. You can follow HOCKEYBEAR's satirical path of destruction and links to cute polar bear videos on Twitter at @AKhockeybear. You can nominate campuses for destruction by messaging HOCKEYBEAR on Twitter too!
Posted by HOCKEYBEAR at 8:47 PM