Humilibreakdown: "OU Anthem" vs. "We are ND"

The greatest period in Oklahoma football history was from 1953-1957, when the Sooners won 47 straight games until finally being toppled by Notre Dame, 7-0. The University of Oklahoma still seeks revenge against Notre Dame for ending their streak and they have been waiting for Notre Dame to show some sort of prolonged competence in football so that they can go out and best whatever record the Irish may set. However, their impatience has gotten to them, and OU is trying to defeat Notre Dame in the only area where the Irish are the undisputed champions: making humiliating hype videos. In the HSR's first-ever Humilibreakdown (TM), we judge between the horrors of "We are ND" and "OU Anthem."

1. TIMING. "We are ND" was posted on YouTube on April 29, 2010, reportedly after it premiered at Notre Dame's athletic awards banquet. In hindsight, this was a very poor time to release the video, as late April and early May is a fairly slow sports period, and thus the blogosphere had plenty of time to mercilessly savage it. On the other hand, "OU Anthem" was posted to YouTube two days before the biggest scheduled event on the Oklahoma sporting calendar, a Red River Shootout which also serves as a de facto elimination game for both Oklahoma and Texas's national title hopes. "OU Anthem" was also posted more than two years after "We Are ND," which should have given OU's administration a hint that videos featuring sickly idiots do not successfully motivate fanbases. DISADVANTAGE: OKLAHOMA. 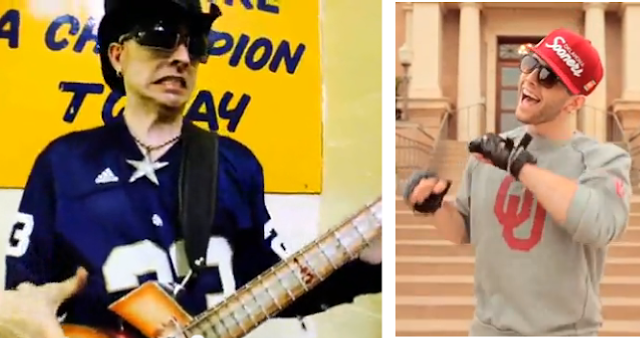 2. SICKLY IDIOT. While Freekbass's performance in "We Are ND" is worthy of the legendary mockery it has garnered, we have to grudgingly admit that Freakbass does appear to be a talented musician, even if his style has as much place at Notre Dame as Lee Greenwood's has at the Sorbonne. Oklahoma's skinny idiot, on the other hand, does not appear to possess any talent whatsoever. DISADVANTAGE: OKLAHOMA.

3. SIDEKICK. Oklahoma has a woman who vaguely looks like Gillian Jacobs wearing a backpack. Perhaps the casting director knew that OU was Brittaing it with this video. Notre Dame has rappin' Tucker Carlson. DISADVANTAGE: NOTRE DAME.

4. PISSING ON YOUR MUSICAL TRADITION. Notre Dame has one of the finest and most memorable fight songs in college football, perhaps second only to "Hail to the Victors," and they shat all over it in "We Are ND." Oklahoma made one of the most annoying fight songs in college football by stealing half of Yale's and half of Alabama's and refusing to come up with sensical lyrics. OU somehow managed to refrain from using their fight song in the video, a departure from their usual method of playing it every time their opponent fails to score a touchdown. DISADVANTAGE: NOTRE DAME. 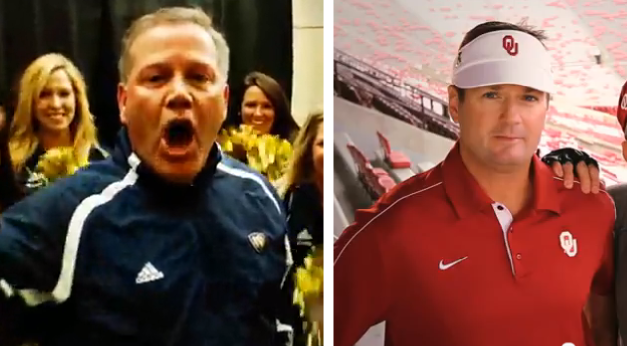 5. COACHING INVOLVEMENT. Brian Kelly actually moved his mouth in time with the music. The only evidence we have that they didn't use a cardboard cutout of Bob Stoops is some brief nodding. DISADVANTAGE: NOTRE DAME.

6. UNINTENDED MESSAGE. "OU Anthem" has a dark message lurking behind its horrifying beat. Young Britta attended OU intending to be study hard and get good grades and in fact spends most of the video in the reading room. However, by the end of this OFFICIAL UNIVERSITY OF OKLAHOMA PRODUCTION, Britta has given in to the debauched lifestyle of the spastic idiot and his furry horse companion and all her dreams of studying and participating in academic life have been shattered. "We are ND"'s unintentional message of "We're white, we're white, we're really really white" is tame by comparison. DISADVANTAGE: OKLAHOMA.

RESULTS: 3-3 TIE. We're going to overtime! To break this tie we go to:

7. UNNECESSARY WRONGNESS. Oklahoma's spastic rapper calls the campus's location "O-town," which makes no sense as the campus is located in Norman and "OU" would have fit the rhythm just as well. It's just an unnecessary reminder that there was once a Top 10 song called "Liquid Dreams." Notre Dame, on the other hand, has Mike Golic. DISADVANTAGE: NOTRE DAME.

"We are ND" holds onto its crown as the worst official hype video by the slimmest of margins. Oklahoma inches ever closer, as "OU Anthem" is significantly worse than their previous entry, "Ice Cream Paint Job." The blame lies solely with Coach Stoops, whose clear refusal to cooperate with the producers provided watching "OU Anthem" with very brief flashes of actual amusement. Should have brought Switzer back for this one. Or maybe Schnelly. Once again, Stoops shows he can't win the big one.
Posted by David at 8:09 PM