HOCKEYBEAR is not impressed by The Big Bang Theory. First, it's the Big Bang FACT - the ur-explosion from which even my greatest destructions pale in comparison. Second, it indulges in the laziest stereotyping of graduate students possible. If you're going to stereotype Caltech graduate students, at least stereotype them accurately. The Big Bang Theory's costume design goes to great effort to make Sheldon et al. appear anti-fashionable by outfitting them with ugly or bizarre clothes. In actuality, Caltech graduate students are, at worst, unfashionable in that they wear T-shirts, jeans/khakis/skirts, and comfortable shoes. Based on HOCKEYBEAR's observations, this is what about 80% of humans would wear 80% of the time in a casual workplace. It's like people who work at an institute of technology are more interested in SCIENCE than FASHION.


I spend a fair amount of time in Pasadena, checking out the progress at the Jet Propulsion Laboratory. I could just give the JPL the mass of accumulated aerospace knowledge that space bears have gathered over the years, but we have an agreement not to divulge these technologies to humans until such time as you learn not to be boorish, violent, embarrassments. Despite what you may have seen in Star Trek: First Contact, the development of warp drive technology is not the events that provokes alien species into instigating contact. Alien species are waiting until the time when humans evolve far enough as a species to form an intelligent and well-reasoned YouTube commentariat. Keeping humans for advancing too far into space before this happens is why HOCKEYBEAR keeps destroying the International Space Station.

I was dismayed to learn the Caltech was guilty of using thirty ineligible players between 2007 and 2011. If a school is going to blatantly disregard NCAA rules in order to preserve a class registration schedule that it feels is optimal for educating its undergraduate students, they should at least win a few games as a result. What they need is a HOCKEYBEAR to transform Caltech into an athletic powerhouse. Caltech, prepare to receive of generous helping of rage! 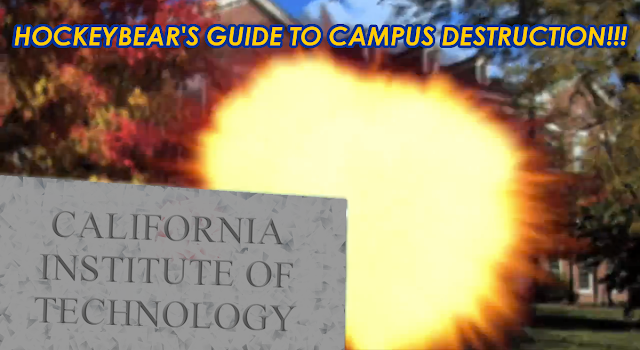 Crimes: Cheating at sports, not becoming good at sports as a result

Some of you have been lucky enough to attend the Tournament of Roses parade. Unless you had a spot near the beginning or the end of the route, you had a spot on Colorado Boulevard. The buildings along have Colorado Boulevard have suffered under three of HOCKEYBEAR's biggest allies in destruction: time, neglect, and automobile-centered urban planning. Caltech will need brand new hockey and basketball facilities as soon as possible, and a rapid demolition of the buildings on Colorado between Mentor and Holliston Avenues will provide sufficient space. The new facilities will be built with brand new storefronts on the boulevard, and with built-in hotels overlooking the Rose Parade route. This urban revitalization will help to fund these projects which, in accordance with current top-tier research university naming practices, will be called the Kavli Institute for Hockey Research and the Howard Hughes Basketball Institute. Foot-ball will, of course, be played at the Rose Bowl. For non-revenue sports, locations for venues can be carved out on campus. The Robert A. Millikan Memorial Library? The Isotope Handling Laboratory? Those don't sound important. HOCKEYBEAR will knock them down and replace them with some soccer fields.

Caltech researchers currently study in a wide range of fields, include high energy physics, artificial photosynthesis, and xenobiology. While these fields are worthy of study, they are not useful for the far more important goal of helping the university be victorious in sporting competitions. Other research efforts will need to be redirected in order to benefit Caltech's new athletic prowess. Neuroscientists may want to understand the entire brain, but their most important goal needs to be designing helmets to prevent concussions and chronic traumatic encephalopathy. The design of the foot-ball helmets will be kept secret, in order to give Caltech an advantage against its new cross-town rivals, UCLA and USC. The hockey helmet design will be made freely available, as safer helmets for everyone will make hockey even more awesome.

Caltech is also a leader in robotics research and this can benefit its new athletic programs in several ways. Remember: a good way to get around rules against giving athletes special benefits is to provide all your students the benefit. I plan to take advantage of this loophole by accelerating the development of prosthetic limbs to the point where every Caltech undergraduate will be offered one upon registration. What foot-ball wide receiver couldn't use a third arm? What lineman couldn't use an extra leg for balance? All students will be limited to one extra limb: we don't want anyone going around on four legs pretending to be HOCKEYBEAR.

Furthermore, Caltech's research in autonomous driving and in multi-robotic systems will come in handy solving the biggest problem that major college sports face: horrifyingly poor parking for spectators. When fans arrive at Caltech's games, HOCKEYBEAR's new robotic technology will autonomously drive their cars to nearby or faraway parking lots. After the game, all the cars will drive back to the arena or stadium, carefully self-organizing so as to optimize the egress of fans.

Once Caltech has promoted itself to Division I and started to dominate the Pac-12, HOCKEYBEAR will unleash its bio-engineers and physiologists to solve the most important problem of all: rapid repair and regeneration of torn cruciate ligaments. Once we make torn ACLs and MCLs a thing of the past, nothing can stop us from athletic domination! Foot-ball, basketball, and hockey championships every year!

Of course, just to be safe, I'll blow up MIT. Can't have them trying to play pranks on HOCKEYBEAR.

Next time: Double feature! HOCKEYBEAR takes out DeVry University by reader request, but makes a stop by Iowa State first.

HOCKEYBEAR is a renowned primeval force of destruction known for his appearances in University of Alaska hockey intro videos. When not traveling across the galaxy destroying planets and stars, he lives in Fairbanks and supports his hometown Nanooks. You can follow HOCKEYBEAR's satirical path of destruction and links to cute polar bear videos on Twitter at @AKhockeybear. You can nominate campuses for destruction by messaging HOCKEYBEAR on Twitter too!

Posted by HOCKEYBEAR at 7:50 PM