HSR Field Trip: A Day By The Lake 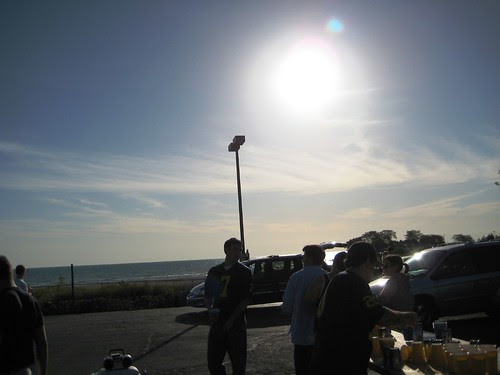 6:15 is a damn early Saturday wakeup call in any timezone, but I'd been the one pushing for a 7:00 departure from the O'Hare Holiday Inn, so it was all my fault. We made Evanston, figured out you can't park on the golf course, and found the on-campus lots by 8:00. Immediately after we parked, in came a U-Haul next to us. Three people in Michigan gear jumped out of the cab and rolled up the gate. 15 guys inside gave a cheer and jumped out the back. Awesome. 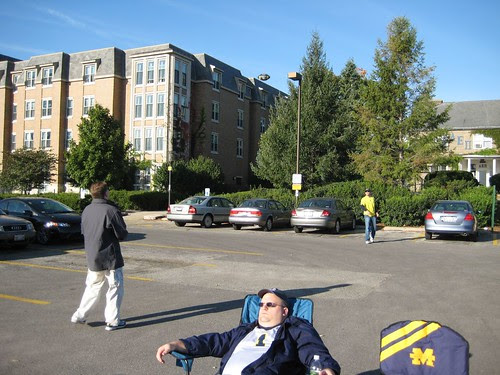 We got ourselves set up quickly and looked around our lot. Nothing but Michigan fans as far as the eye could see. Blue sky, blue lake, yellow sun. The U-Haul people got out the grill, the boombox, and the traditional door for flipcup. Craig caught up on the sleep I'd deprived him of while the rest of us threw the football around [Craig: I want to make this very clear, that is sleep, not drunk. Sleep!]. 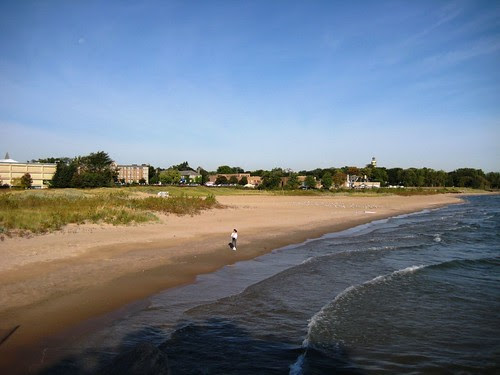 My brother and I are always apt to wander when tailgating. The Cardinal came with us as we tried to find a way down to the beach, but it's all fenced off. Lame. I was at least able to get this picture looking back toward our tailgate site. You can see the Grosse Point lighthouse sticking up on the right. If the spelling of "Grosse Point" looks wrong, it's because the "e" in "Pointe" had to be amputated after a particularly chilly February in 1917.

At 10:00 we packed up and then started walking to the stadium. The other three headed inside while I waited to give my sister her tickets. And waited. And waited. At the exact moment when I was about to snap, her cab pulled up. I pitched the tickets through the open window and ran to my gate. I took my seat as the NUMB was lining up for pregame. 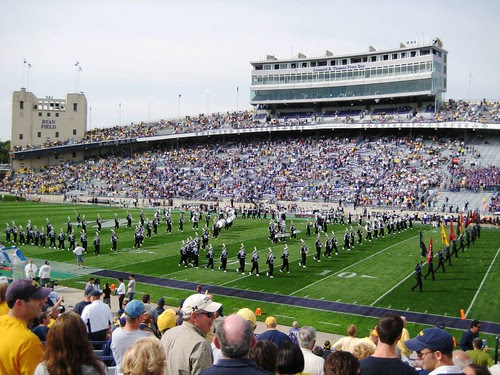 The first thing you notice is that Northwestern has a very small band. Its total undergrad enrollment is 7,826, so that makes sense, but 148 is still not a large number. They also have flutes, and a lot of them. Not just piccolos, but flutes, which are even harder to hear. The performance was pretty good, and both drum majors nailed the backbend, but then they interrupted it in the middle for five minutes of standing around doing nothing while waiting for the team to come out of the locker room, during which time the PA system – the PA system! – played "Thunderstruck" and "Welcome to the Jungle". And the team didn't exactly race down the hill either, it was more of a casual jog. Decidedly anti-climactic. The band played the anthem and then finished up their show with some other Northwesterly things before vacating the field. 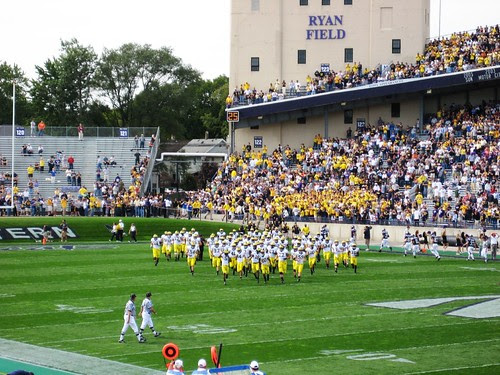 We went to Indiana last year and Evanston was our road trip for this year. 2-0! Next year: Minnesota, probably. The Metrodome is a crap environment for college football, but I'd like to see a game there before that's not an option. Purdue is another possibility, especially since West Lafayette is a relatively quick drive for me.

The U-Haul was officially part of the 4th Annual Rib Trunk Show, a festival of meat and UM Football.

Considering the Friday night before the game, I'm shocked most of the people in the back of the truck handled the drive from Lincoln Park.