The marching band receives much attention for its high-profile activities before they enter the tunnel in Michigan Stadium: The rehearsal on Elbel, the stepshow and inspection at Revelli, the march to the stadium, etc., are all popular events. But since the public doesn't get to see what happens between that parking lot performance and the entry onto the field, I dug through my collection of pictures and found some that help tell the tale of pre-pregame excitement.

It contains minor spoilers; if you may, at some point, have an opportunity to experience what's about to be described, don't proceed.

After playing The Victors and Let's Go Blue toward the stadium, the band is called to the mouth of the tunnel. People line up in entry lines -- the same ones that come through the other side -- and run, one line at a time, most of the way down. 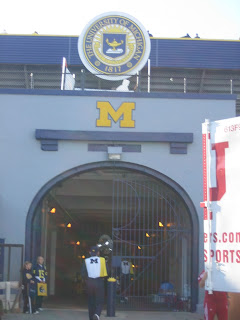 Running down can be exciting, but there is a pole in the center that's at just the right height to cause serious damage to instruments and tender body parts. 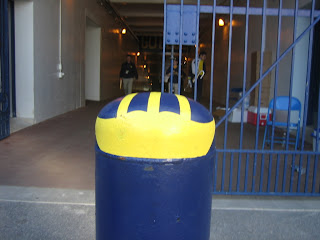 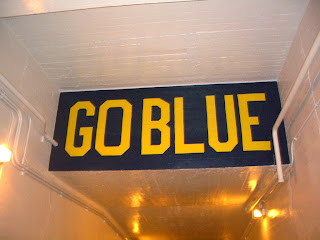 The first few minutes in the tunnel allow time for stretching or finally getting a drink from the water bottles. People will be all over the place. 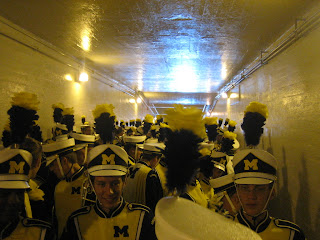 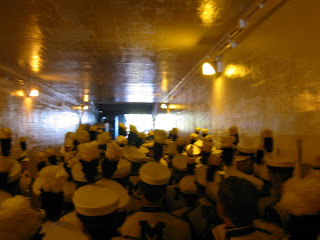 The tunnel is dimly lit in yellow lights, and the brief glimpses of players standing by its bright exit provide dramatically framed moments of excitement. 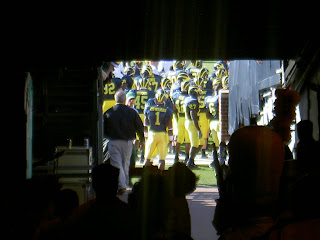 Occasionally, celebrated alumni will head down the ramp. Here, Braylon Edwards stops by the 2005 Notre Dame game with his famous pink shirt, B E chain, and, uh, MCard. 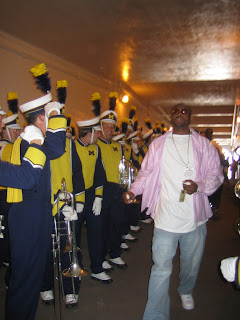 It's been a while and I may have the order of these next things mixed up. Eventually, both teams will return to their locker rooms via the tunnel. When the opponents enter, the band stands tightly lined up, in complete silence, staring straight ahead. This is usually ignored but occasionally players (primarily from the MAC schools) will taunt the band. That's fine -- if you're focusing on the band, you're not focusing on your game. When the Michigan team comes up, the drumline strikes up a beat. Most of the band sings "Eye of the Tiger," then the drum major lines them up for singing "The Yellow and Blue." The band gets herded to the front in tightly packed lines (the mouth of the tunnel is surprisingly narrow). 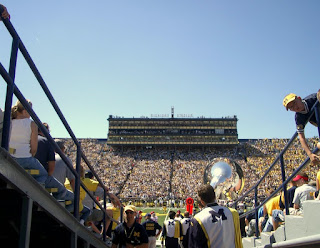 When it's finally time to go, the assistant director receives a cue over his radio and points up to the press box, where Carl Grapentine is watching intently, poised to make his famous announcement.

The week's preparation and work finally and absolutely pay off.

Only two days until we get to see this again.

Email ThisBlogThis!Share to TwitterShare to FacebookShare to Pinterest
Labels: focus on the bands, hydration, mmb, photo, things almost too long to read

Seriously Jeremy? You gave away all the secrets and splendor of the tunnel for the world to see?

What should remain hidden?

Not hidden per se, just feels like someone leaking the ending of Harry Potter or something.

I'm not concerned about the general population, more so about the magic of the first time someone makes it into pre-game and witnesses the goings on firsthand (i know you had a spoiler warning, but i didn't even notice the first time I read it since it was linked on Brian's m.go.licio.us, straight to the article)

Excellent man! Thanks for this post, great stuff. Would love to see move 'hidden video' inside the tunnel if you've got it.
-G

Ameed, I think it's more like someone describing a roller coaster. Hearing about it explains a little bit but really you have to experience it for yourself. That said, I can see how I may have ruined some of the magic; I suppose it's become routine to me. I hope if there ARE any pre-frosh/tunnel virgins out there, they proceed at their own, limited, risk. However, I think the post is more helpful to the folks who'll never know than harmful to those who might someday find out.

mvictors, the only other videos I really have are of people singing "Eye of the Tiger" and seniors [SPOILER ALERT] signing the wall before their last game... not terribly exciting stuff.

I'm famous, Jeremy, I quickly run by in the high five video. I'm with you that its cool to read about bandos psyching out stupid MAC players, but we never told anybody about Eye of the Tiger or Yellow and Blue.

I miss watching Braylon go by. He gave me a high five once... :)

Wow...I have been of the band for 9 years, but still got those same chills when I heard that all-to-familiar bass drum inside the tunnel paired with the "Let's Go Blue". I appreciate the video.

As someone who will (unfortunately) never ever come anywhere near experiencing that, thank you for the post. It's so cool to see those gameday details. Now I'm even more excited about Saturday.

Actually, I should say thank you for all the band-related posts (mainly the recent "what to expect" posts). It really gives a great look into the band, and it makes me appreciate the band's contribution to gameday a little bit more.

yah. those were the days.

Having no connection to the band: this post is awesome and gave me chills. Thanks for the behind-the-scenes details.