It's that time of year.

In 1952, George Cavender was named the new assistant director of the Michigan Marching Band, and he would remain at Michigan until 1975. Among the members trying out for membership this year was H. Robert Reynolds, who eventually became Director of Bands. This was the letter Cavender sent out 55 years ago today. 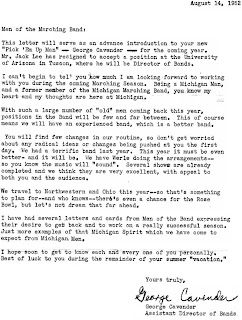 Email ThisBlogThis!Share to TwitterShare to FacebookShare to Pinterest
Labels: mmb