HSR details the history of Michigan football season t-shirt design and its effects on the football program.

Back in 2003, the athletic department offered the chance for students to design a t-shirt for the football season. The incentives were obvious for both sides: Free labor for the U, a chance to make a buck (you don't hate supporting Michigan, do you?) and a portfolio boost for the winner.

The 2003 student-designed season football shirt got the program off to an excellent start, with its now-iconic winged helmet logo, the flashy-but-still-traditional block lettering, the old-school thin block M, and the Space-Bitches list of football facts on the back. 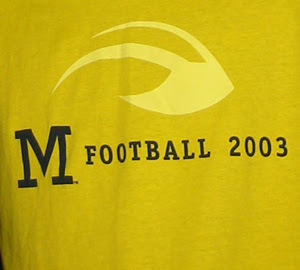 The 2004 shirt took a step backward with its absurd lowercase sans serif font and blurry abstraction of a running back (the exact opposite of the iconic graphic from 2003). 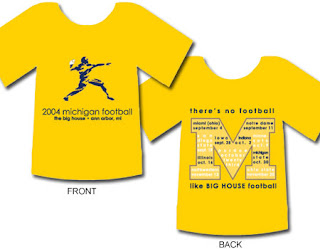 The 2005 shirt had an oddly cropped oil painting on the back, but at least the front had an appropriate image and font.

Although they took the design out of the students' hands for 2006, that season shirt returned to its proper maize roots. Unfortunately, the listing of University stats on the back made it sound like a collaboration between Nike and the Alumni Association. When I'm traveling the country on road games, sharing the fact that UM has students from 80 countries is not going to convince anyone our football team is great. 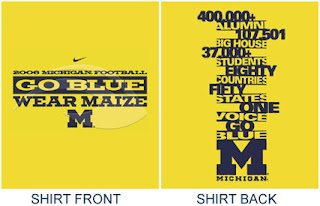 2007's shirt is nothing exciting, with a decent logo and just the home games on the back. It doesn't do anything wrong, either, though. Except that it has "Appalachian State Mountaineers" listed among our opponents, which is weird because they're a I-AA team, and Michigan doesn't schedule them. I'll have to contact Bill Martin about that one. 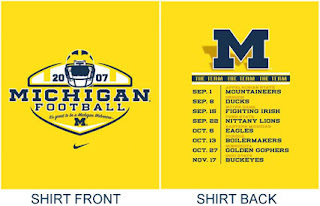 The University started promoting color unification with the 2002 with a "Blue Out" against MSU and "Maize Out" for the Penn State game. However, selling a blue season shirt or encouraging people to wear anything besides maize (jerseys are the one exception) is a terrible idea that should never have happened. Here's why.

The designer submitted a maize shirt, which, after it became University property, was announced as the winning design... on a blue shirt. They pulled it out from under her. After enough backlash, the athletic department held a poorly publicized vote to determine the winning color. A whole 3,000 people voted in it and blue somehow won by 100 votes.

Of course, this vote was based on something that shouldn't have been an issue in the first place. The t-shirt design contest information packet said "the color of the shirt will be designated by the submitter," which means we were free to choose the color. The winning design was submitted as a maize shirt and then it got mutilated (with the swoosh added and the color changed). The athletic department had no intentions of letting the winner pick the color; they wanted a blue shirt all along.

Aside from the entire 2005 season, presumably a year-long Blue Out because of that year's shirt, we've had two officially titled, publicized, big game Blue Outs: 2002 vs MSU and 2005 vs Notre Dame. Here are the results. 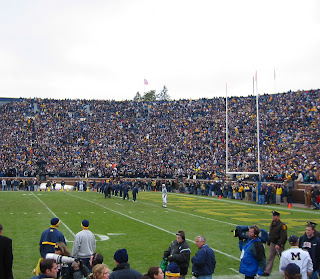 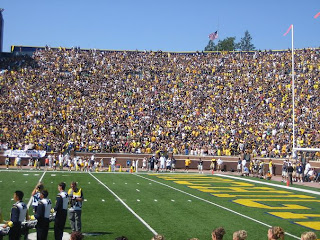 The goal of the blue shirts, we were told, was to "unite the team with the student body." Which is not accomplished by darkening the student section. Blue is dark, maize is bright. On top of that, not nearly enough people participated, so it extrasucked.

Even if it had succeeded in draping everyone in blue, it wouldn't have been impressive. You could smear mud on everyone in the section and they'd be 'uniform,' but they'd still all be smeared in mud. The goal should be to stand out in one united block. Notre Dame's student section wears an unnatural shade of green that stands out. When they all wore it, it looked awesome, so the project was a success even though it didn't match the team uniforms. Well, that and their constant cheering and perfect interaction with the band.

Consider some maize out pictures.
Penn State in 2002: 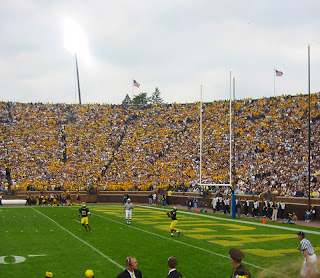 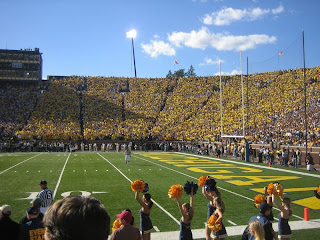 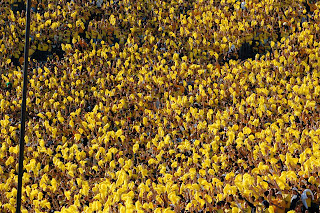 3. Consider the team's records for games in which maize was either the season's shirt color, or the promoted "* Out" color.

22-0 vs. 4-3. Correlation doesn't equal causation, but Q.E.D. Please wear maize, or whatever that color Steve & Barry's makes, inside the stadium.

There was also a Blue-Out for Ohio State in 2003. The blue long-sleeved shirts sold for the 100th game had the same "Blue-Out" logo as the '02 MSU shirts.

I remember the shirts, but was that a publicized "Blue Out" (with the phrase in the Daily or a Cavi letter) or just a commemorative 100th game t-shirt?

One of the faults I have seen as an alum with the "Go Blue, Wear Maize" concept is that I like wearing one of my several Michigan football jersey replicas to the game. And none of those are maize. It's like a conflicting sense of duty there.

I think you can wear your jersey to a maize-out guilt free. Success isn't determined by 100% participation, but rather than the contribution that the student section makes to the gameday atmosphere.

Frankly, a maize-out is still going to be an order of magnitude more effective than any blue out, even if everyone who owns a jersey wears it to the game.

The important issue here is which colour the athletic department chooses to promote for each game.

Yeah, I exempt jerseys from my criticism. Can't get mad at people for supporting the team in one of the most authentic (and expensive) means possible.

I usually wear my jersey around all morning, stash it at a friend's house and wear a maize t-shirt to the games. This will stop as soon as I stop having friends who live nearby.

Unfortunately, I did not keep all of my season T-shirts. Do you have a photo of the back of the 2003 shirt? Can you please post a photo of it? I remember I really liked the audacity of boasting about the statistics of Michigan Football!

I was trying to remember what it said on the back, but I can't and I also can't find a picture of it anywhere on the web!