The Nussmeter Continues To Be A Top Priority

Based solely on the performance of the players, the Nussmeter would have held steady at 1. But after a game where the Michigan offense actually became a national scandal instead of a mere local embarrassment, we have no choice but to introduce a new level: 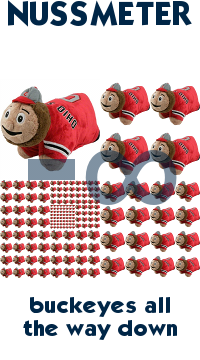 Should it become necessary, the Nussmeter can and will start working its way through the negative transfinite ordinals. Unfortunately there is no largest transfinite number, as that would come in handy if a Harbaugh gets hired.
Posted by David at 9:00 AM