As we prepare for the 104th edition of the greatest rivalry in all of sports, it's important to take a few jabs at each other along the way. Here are some aspects of college football where Michigan has influenced the Buckeyes.

Because the athletic director loved the colors*, the rotunda at Ohio Stadium is decorated with maize and blue flowers. Michigan Stadium wasn't built for five years afterward, but it's probably not hard to guess what the color scheme was going to be. 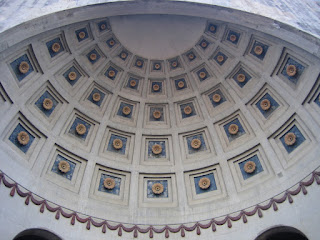 The first script Ohio was formed in 1932 by the Michigan Marching Band.

Yes, this is not THE [HYPERBOLE] SCRIPT OHIO as we know it today. It is still Ohio, in script. And OSU fans will be quick to point out that the MMB just marched straight there. Which is fine, because it gets it over with faster.

The OSU band also played music from Titanic at last year's game. While they played Celine Dion's famous song, they formed the ship, cracked it, and sunk it off the edge of the field, using fire extinguishers for steam. The crowd loved it.

Now, that's a clever idea, but I liked it better when the Michigan Marching Band did it in 1998.

"Michigan Daily: The Band Plays On - 10/1/1998: 'That whole thing with the band members grouping in the shape of that old sunken ship, complete with the fire extinguishers for steam, was quite creative and entertaining, and very cool.'

Actually, they came up with this one all on their own. I hope.

*No. It's because the winner of the 1922 dedication game got to paint the flowers in their colors. Michigan won 19-0.

"And when we win the game, we'll buy a keg of booze!
And we'll drink to old Ohio,
'Til we wobble in our shoes!"

learned "I want to go back to Michigan" and a host of other Michigan songs when I was in Glee Club. i always wondered what Joe's and the Orient were. =)

UM songs are very pro-glee club... i think that sums it up right there.

Actually both teams stole the song from the University of California. The hills referenced in the lyrics are the hills surrounding Berkeley. I wonder where these two teams would've learned a song from a Pac-10 School?