Last year, between the Ohio and Wisconsin games, we spent the time wondering why do we all hate Aaron Craft so much? To answer this question, we proposed the Four Factors of Hate, and used these factors to find the Big Ten leaders in Tempo-Free Hate. This year, the question of why we all hate Aaron Craft was answered once and for all when Doug Gottlieb blamed this on the ball being too slippery:

Even though unwarranted media attention and apologia are good reasons to be annoyed by a player, the Four Factors of Hate try to quantify just what makes a player so annoying using only the stats on the floor. The four factors are:

All stats come from Sports Reference College Basketball, except for team adjusted tempo, which is pulled from the front page at kenpom. Who is the most annoying player in the Big Ten? Find out after the jump!
First, the top ten in each factor. Only players that averaged more than 5 minutes per game before the Big Ten Tournament were considered. Here are the leaders in steals per personal foul:

Aaron Craft was further down this chart last year, but in 2013-14 he's right near the top, just behind his Wisconsin doppelgänger, Ben Brust. This factor is dominated by backcourt players, in particular Spartans, Buckeyes, Hawkeyes, and Gophers.

Next up, the ability to draw fouls:


The three-point specialization leaderboard is composed entirely of part-time players; Ray Gallegos averages 26.2 minutes per game, the most of anybody on this list.

Lastly, we have free throw percentage:


To compute tempo-free hate, we perform the following calculations.


Crunching the numbers produces your 2013-14 B1G leaders in hatred!

Ben Brust is so far off the charts this year, it's like he's 40 feet away from everyone else *ducks*. Not only is he the leader in ST/PF and FT%, he's also the highest ranked three-point specialist who averages more than 30 minutes per game. Finishing a distant second is Brust's teammate Josh Gasser, whose inability to steal the ball keeps him from being quite as hated. Aaron Craft finishes third, held back by his poor three-point shooting ability. You can't hate him that much when you're thinking about him shooting three pointers.

Using TFH, we can assign each team its "Most Hateable Player" award.


There's a strong relationship between a team having a very hateable player and that team being good at basketball. The exception: Nebrasketball. Everybody loves Nebrasketball.

To get more insight into the relationship between TFH and actual basketball ability, here's a scatterplot of the 114 players we considered, with a loess curve on top: 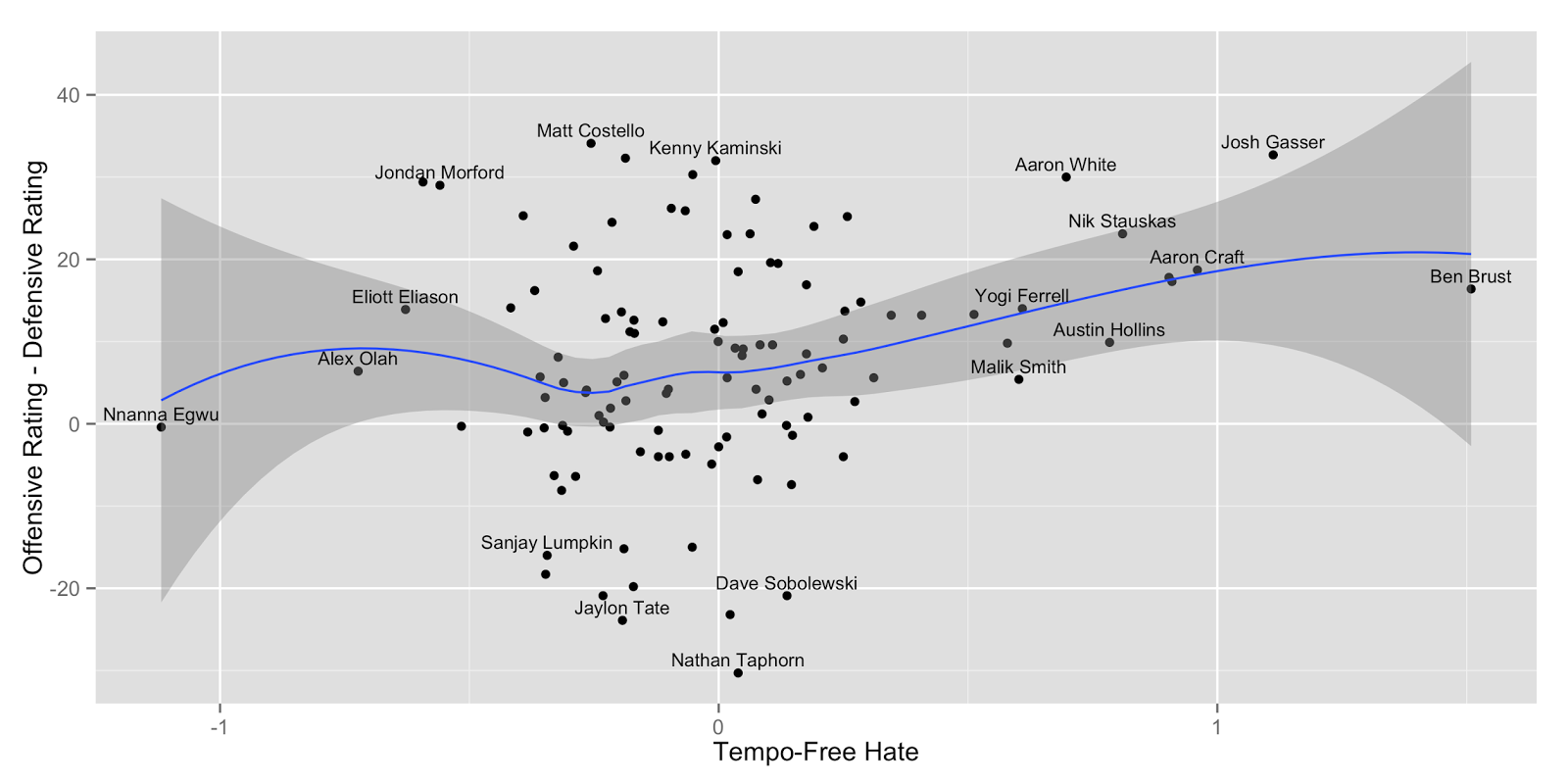 Based on this chart, we can conclude that you don't have to be hated if you're good, but you have to be good to hated. There's almost no correlation between TFH and Offensive Rating - Defensive Rating if the tempo-free hate is less than about 0.25 - the loess curve is basically flat in this region. However, there's a group of 10-20 players that are both pretty good and basketball and masters of at least one of the annoying skills that make up the Four Factors of Hate.

Comparing this year's chart to last year's, not only will you notice that I've upgraded from Excel to ggplot, you'll see that tempo-free hate is somewhat repeatable. Nnanna Egwu is the least hateable player in the league for the second year running. Who can hate a center who can't create his own shot?

Jordan Morgan and Jon Horford are basically tied for being the most likeable player relative to performance and they're in the same spot on the chart that Mitch McGary had last year, before he went beastmode in the tournament. Austin Hollins, Craft, and Nik Stauskas all make repeat appearances in the Top Ten of Hate.