Seal Block Week 5: The Pac-12, where "Let your light so shine" could not be more aptly applied

Instead of introducing the Pac-12 seal ranking, I’d like to take a moment to pontificate on the break-up/retirement of R.E.M. In my role as Mid-Maryland correspondent, I need to point out that the lyrics of “Don’t Go Back to Rockville” are problematic. Specifically, the couplet “You’ll wind up in some factory that’s full time filth and nowhere left to go/Walk home to an empty house sit around all by yourself.” That is unlikely to happen in Rockville. As the primary manufacturing industries in Rockville are biotech, their factories had better be full time clean, without even a speck of filth. Furthermore, if the object of Mike Mills’s desire was able to afford a house in Rockville close enough to public transportation that she could walk home to it, she would have sufficient wealth to be able to easily attract men should she desire them. If you wish to criticize Rockville, its horrible traffic and overly expensive real estate are the main things you should fit into your couplet.

This is the sort of nerdy analysis that would happen at a lot of Pac-12 schools. Probably not the school at #12 though. 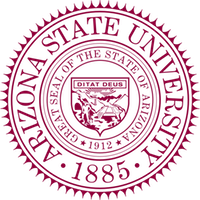 12. Arizona State
What it's trying to say: It's so cool that our school is actually older than the state that it's in.
What it's actually saying: Don't put in a good seal in the middle of your crappy seal.
Despite being ranked in the bottom two by all voters, including myself, I like Arizona State's seal. They took the Great Seal of Arizona and put a border fence around it. It's so much better than any of the proposed real-life border fences because it fences off the entire state. 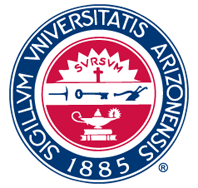 11. Arizona
What it's trying to say: “Rocks and reason.”
What it's actually saying: Sursum means "on high," or perhaps simply "high."
That guy who wrote the article for the Arizona student paper making fun of the seal must look at the headshot he used in 1999 and either: a) hang his head in shame or b) look back wistfully on the days when he could grow his hair that long. In either case, thanks to him for making writing this entry easy. 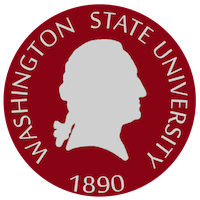 10. Washington State
What it's trying to say: We named the state after George Washington!
What it's actually saying: Cool! A big ugly head!
Washington State started designing itself a quarter, but gave up halfway through. I think the face on this coin better resembles a typical resident of Pullman, though. 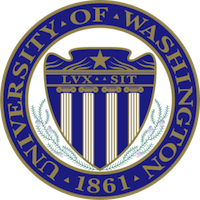 9. Washington
What it's trying to say: We have a lovely outdoor theater on campus, surrounded by greenery, and backed by four classical columns.
What it's actually saying: Goddammit, Oregon.
Having been the Pacific Northwest correspondent, I know that these four columns are in the Sylvan Grove, about 100 feet from my old office, but they violate the rule: no colonnades. It's especially galling because, on a sunny day, this is the view from 200 yards northwest of the columns: 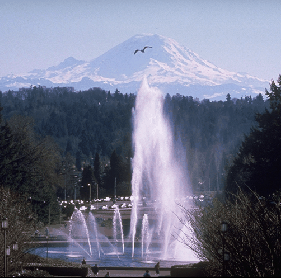 The architectural history of UW is documented in The Fountain and the Mountain, and those would have made two awesome principal design elements for the seal. But UW was beaten to the punch... 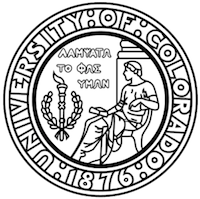 8. Colorado
What it's trying to say: We follow in the tradition of the ancient Greek scholars.
What it's actually saying: Font choice matters.
Four of the Pac-12 universities have some variation of "Let there be light" as their motto. Colorado gets points for varying it to "Let your light shine" and showing a classical scholar just chilling out. However, all those points were lost for using the weird outline font along the outer rim. Look at this alternate version with a normal font. It would be much better than the official one if only it had kept the motto in Greek. 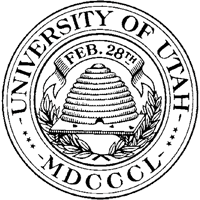 7. Utah
What it's trying to say: Bees = Industry!
What it's actually saying: If you've spent any time on the Internet, you know what this link is.
What lurks behind the beehive? Is it a classic Fantastic Four comic? Is it a criminally unknown song from the time in indie-rock legend Carl Newman's early career before he got a decent haircut? Is it a copy of No Man Knows My History? I bet it's just another slightly smaller beehive. 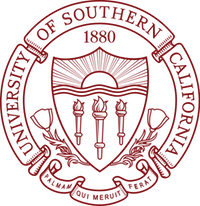 6. USC
What it's trying to say: We have poppies to help get our students started in fast-paced Hollywood.
What it's actually saying: We have roses on our seal to boast about our football team, but only for the years we didn't pay them.
Did you know? The word "moron" was introduced into the English language by Henry Goddard, who also was coach of the first USC football team. Tom Buchanan likes his eugenic theories in The Great Gatsby. Although the flowers appear to be roses, they are actually California poppies, which symbolize "remembrance, hope, joy and growth." And opium. And heroin. Unlike the three torches and the sunrise, they are actually a unique design element, so points for that. 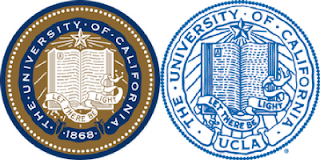 4/5. California/UCLA
What it's trying to say: Let there be light so we can read our books!
What it's actually saying: They must have put up with a lot of tohu wa vohu.
Man, that book must have a long preface and table of contents if Section "A" only starts halfway through it.
All schools in the UC system have more or less the same seal, just in different colors and sometimes differing spacing of the outer ring depending on the length of the name of the location of the campus. UCLA blue is not a good color for a seal though, and it would be better if it said "Los Angeles" instead of "UCLA." 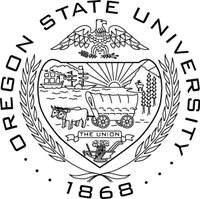 3. Oregon State
What it's trying to say: Look at the majesty of the Willamette Valley!
What it's actually saying: There is nothing risible about this seal. Fuck you, Minnesota Educational Computing Consortium.
Crowdsourcing time! Let's make jokes about Oregon State's seal! 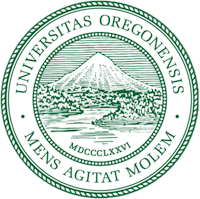 2. Oregon
What it's trying to say: You can see Mt. Hood from Eugene.
What it's actually saying: We're dirty stinking liars.
Washington's up there at #9 saying, "Jackasses." While some may object to me characterizing the seal-makers as "liars," I think plenty of people have used the words "dirty" and "stinking" to refer to the population of Eugene. Anyway, it's only a matter of time before that Latin motto get replaced with a Greek motto meaning "Victory." 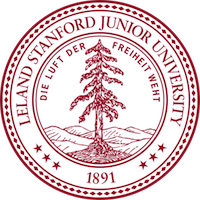 1. Stanford
What it's trying to say: We're in "Palo Alto." Perhaps some kind of "Tall Tree" would be appropriate?
What it's actually saying: Young Leland would really have enjoyed the university named after him.
Before 1955, there were actually two redwood trees on the Stanford seal, but in November of that year, one of them slowly faded away. The Stanford mascot is an alternate version of the redwood tree that only exists in the timeline that forms after Biff steals the copy of Gray's Sports Almanac.
Stanford's seal's lonely tree really hits at the melancholy that lives at the heart of a school that was named in honor of its founders' dead son. It's a reminder that a scholarly life is a lonely pursuit, where maybe only a handful of people in the world can understand you. It's this week's best seal for being a great combination of place and academic life. Perhaps moreso than any other school we've seen, Stanford's seal is understood as a symbol of the school.
The Pac-12 slots into third in the conference ratings, behind the SEC and ACC, but ahead of the B1G and Big XII.
Next week: The Big East seals in "The Octosigillion."

"There is nothing risible about this seal. Fuck you, Minnesota Educational Computing Consortium."

these two sentences just made my day.

Those three sentences just made my day!

I love Colorado's goofy font. It reminds me of the WPA-vintage buildings at the MN State Fairgrounds, and makes me hopeful that the legendary Alferd Packer Grill serves many deep-fried, ensticked items. Points docked for a motto that translates to a crappy Collective Soul song, though. Chillin' scholar should have a Hacky Sack.

Also, thanks you for providing further evidence that R.E.M.'s quality is inversely proportional to Stipe's vocal clarity.

To be fair to Mr. Stipe, a lot has changed in Rockville since 1984. Interestingly for sports fans, the primary chronicler of Rockville's urban re-development was none other than Jonah Keri.

Also, I always thought the lyric was "'Let Your Light So Shine' could not be more than half made-up". Must be the atheism.

C'mon Greg. Someone who complains about R.E.M. that much should not have even listened to "Voice of Harold," let alone have attempted to try and decipher mumbled lyrics.