The Hunt for Dread October

The Hunt for Red October may be this blog's favorite movie, certainly Top Five.  I know that Geoff and I can exchange lines from the movie as stock in trade currency, particularly for Michigan football.  While I should be writing up the San Diego State game, I'm looking forward with equal amounts hope and fear.

"Ryan, turn the wheel until the rushing yardage here reads 3-1-5."

"Listen, I'm a politician which means I'm a cheat and a liar, and when I'm not kissing babies I'm stealing their lollipops. But it also means I keep my options open."

After the Notre Dame game, I tweeted very simply: "And the singing, Captain?" "Let them sing."  The moment was too good to start worrying about the future.  But at some point, the future arrives and you need to deal with it.  How well prepared you are for that future plays a large role in how well you're able to handle it when the moment arrives.  The non-conference schedule, particularly one played as four games at the start of the season should, theoretically, be a nice combination of challenges and the working out of kinks.  Before the mission starts, you must know the capacity and capabilities of your crew.

If Michigan is to avoid a repeat of the last two seasons, it's going to need to come from, first and foremost, the defense.  Stopping a variety of MAC and Mountain West schools is one thing and while it is nice (23 points in three games against the aforementioned teams), it's not the Big Ten.  The defense is going to continue to need to be aggressive, be in position to make plays, and most importantly, make adjustments.  This is where I trust Greg Mattison.  I feel like every game, Mattison is going to have a feeling out period and then attack, attack, attack.  As long as Michigan can hold off the dogs during that feeling out period.


"Well... Ramius trained most of their Officer Corps, which would put him in a position to select men willing to help him. And he's not Russian. He's Lithuanian by birth, raised by his paternal grandfather, a fisherman. He has no children, no ties to leave behind. And today is the first anniversary of his wife's death."  --Dr. Jack Ryan

If there's something I appreciate four games into the Brady Hoke era, it's his genuine sense of humility.  Not to cross-sub-reference, but Hoke reminds me of something that Robert Guillaume's character Isaac Jaffe said in one of the early episodes of Aaron Sorkin's SportsNight:  "It's taken me a lot of years, but I've come around to this: If you're dumb, surround yourself with smart people. If you're smart, surround yourself with smart people who disagree with you."  Part of life is knowing when you're not as smart as people around you.  That doesn't make you dumb, in fact, it's one of the first signs of wisdom and intelligence, knowing one's own limitations.  Brady Hoke has surrounded himself with smart people and given them the freedom to do exactly what they need to do to be successful.  You cannot hope for much more from a coach than that. 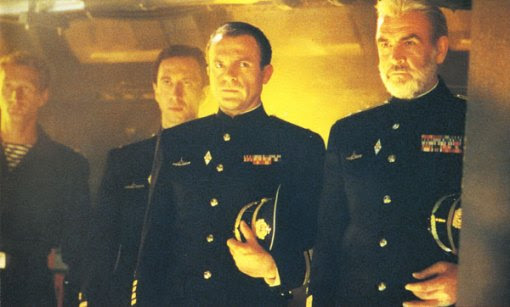 Kamarov: "Stop pissing, Yuri. Give me a stopwatch and a map, and I'll fly the Alps in a plane with no windows."
Yuri: "If the map is accurate enough."


So, Denard.  Denard is still awesome.  Denard is still doing Denard things like only Denard can.  The problem is though that we're no further along heading into Dread October than we were last year.  Denard is still trying to force balls into double coverage.  Denard is still carrying too much of the load out of the backfield.  But maybe this year can be different.  Maybe there is still time to make adjustments.  But we better hope for now that the maps are accurate.

The reality is that there's nothing new here from me.  It's a lot of meaningless platitudes without any real insight into what is wrong or what is going right.  But as much as I said two weeks ago that Michigan fans seem "freer" now because we've seen the lowest lows, I'm reminded that we also have a tremendous capacity for convincing ourselves that our history is our destiny.  There is no reason to believe that is the case here, because there are critical differences between that past and this present. But as the future is unwritten, we can only look for parallels in an attempt to figure out what is instructive and what is noise.  This week is about the Jug, and about getting off on the right foot in divisional play, and realizing how weird the concept of "divisional play" is.  If the team reacts well to the challenges laid out before them, the next three weeks will tell us a great deal about what this team actually is, not just what it looks like.

In the end, I hope that this team, Team 132 as they like to remind us, is not just a repeat of Team 131 or Team 130.  I hope that that they can find a way to make it more than what it looks like right now.  I hope that we're able to appreciate what they are doing, that we don't overreact if things go awry, and that we can find a way to be happy with what is to come.  Because I don't want to lose another submarine.

"And the sea will grant each man new hope, as sleep brings dreams of home."
--Captain Marko Ramius


*--One of my favorite parts about the screenplay for The Hunt for Red October is that twice the writers give Alec Baldwin a chance to snarkily mock the advice of his superiors, and do it in a pastiche of their accent, first Fred Thompson's good ole boy Southerner, and then Sean Connery's Russo-Scottish burr.  It always makes me chuckle.