I've had to spend some time in the Angry Dome today.  You see, Michigan's got me a little steamed.  We'll give each issue its own post, because they deserve their own post. Take it away Michigan Marketing and Design blog:


The "M" and the seal. (Original Title: The Seal buys a Barcalounger.) As campus communicators, you may have heard that our beloved beloved Block M is becoming the principal graphic mark of the University of Michigan, and the equally beloved Seal is taking a secondary position. The changeover will be gradual: it began, in fact, several years ago. The Seal is not going away: it will still be used on diplomas, regental documents, and many other official papers. (And students will still be able to buy those wonderful spiral-bound notebooks with the gold-embossed Seal on the cover.) But the Block M will now take its place as the public face of Michigan on items from business cards to building signage.

Now, I freely cop to the fact that I do not possess a degree in marketing, nor do I have any research on this topic, but this feels, as a Michigan alum and someone who does have a solid sense of marketing and design, short sighted. One of the things that I have always loved about Michigan is that there has been an attempt to have some sort of delineation between the academic units of the University and the athletic department.  The academic units have the seal, the athletic department got the M, block, split, or otherwise.  Obviously, there has been crossover, for instance, this is the current wordmark of the University:

Certainly we see a block M that represents the whole campus (and yes, I suspect this is the argument.)  And if we go back, prior to the renovation, this was above the tunnel: 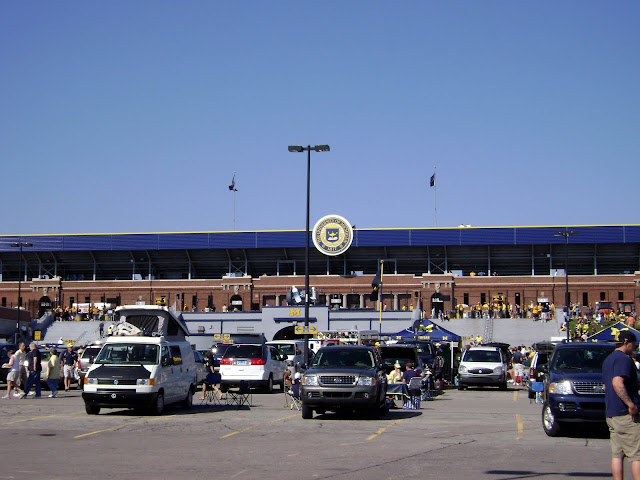 and this was on the scoreboard: 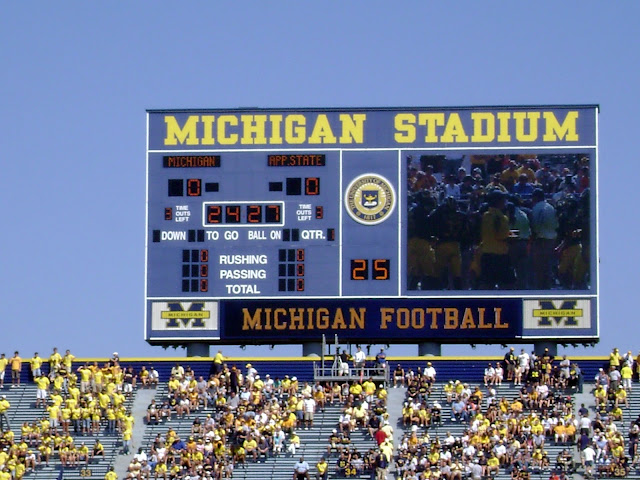 (yes, we'll get to that issue in the next post.)
Oh and look in this Hockey Huddle, what do we see on the shoulders of the Michigan hockey team: 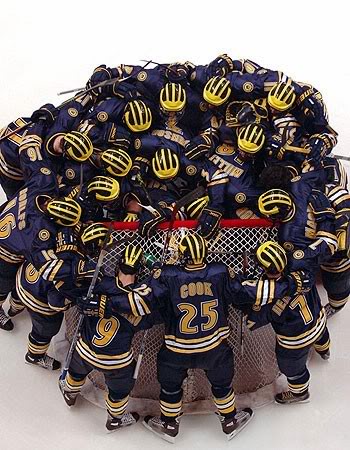 (side note: The hockey team, in the mid-1990s, wore a version of the seal on their jersey which overlaid a Block M, as seen on Brendan Morrison here: 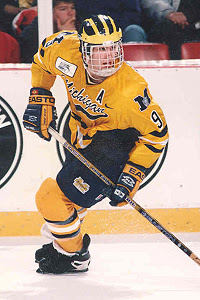 (if I remember correctly, when Nike redesigned the jerseys in the late 1990s, they had to get rid of that version of the logo because it violated the university's logo rules on combining the block M and the seal.  I want to credit John Bacon for mentioning this somewhere sometime.)
and as our friend Armen (who first brought this issue to our attention) pointed out, how many of us had one of these shirts growing up (or something similar.)

I realize that the seal is not being "retired" but rather usurped as the primary academic mark of the University of the Block M.  I know that Mr. Brandon has made a strong push for the Block M to become "the" logo of the Michigan athletic department.  But this feels like a bridge too far.  To lose the seal is to lose part of what makes Michigan Michigan, the strong combination of academics and athletics.
Perhaps this is just railing against "change" but this doesn't feel right at all and I hope, sincerely, that my fellow Michigan alums will back me in supporting the seal's future as a part of who we are.
Posted by Craig Barker at 8:51 PM