We at the Hoover Street Rag have seen it reported in numerous locations that Florida State has been seeing a dramatic drop-off in attendance in the past two seasons, leaving tens of thousands of empty seats at Doak Campbell Stadium. At the same time, I can't help but notice that the same can not be said of Michigan, even though the 'Noles have made bowl games (and won them!) both years, finishing 9-4 and 7-6. This is Doc Sat's chart of FSU attendance: 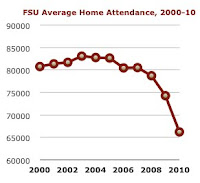 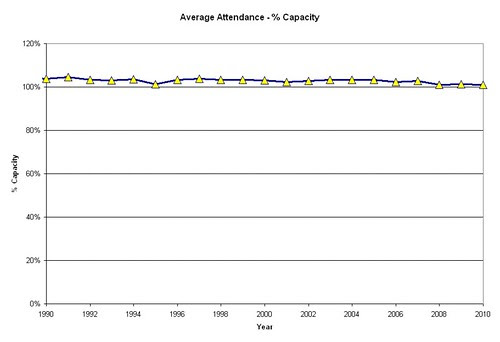 Now there's a graph you can set your watch to. If you want to see anything exciting, you have to back up to the start of the Schembechler era. 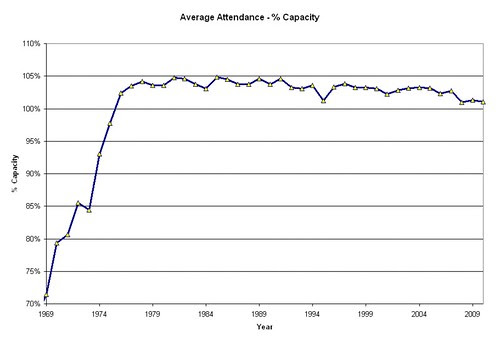 There's a dip in there at the end, mostly taken up by the 2008 and 2009 seasons. You may recall that Michigan struggled somewhat in the first couple of years of the Rodriguez regime, and that accounts for some of the drop-off I'm sure, but this was also when the University added additional handicap seating as they started construction on the luxury boxes. The official capacity was not recomputed, so the number of seats lost is not certain, but total attendance fell by 1,860, or 1.69%, and actually rose by 387 (0.35%) following Michigan's worst season in 46 years. In 2010, with the renovations complete, attendance through three games is off by 0.27% in terms of capactiy, but up by 2,137 per game in raw numbers thanks to a 2,400-seat increase in capacity. This is what the raw attendance figures look like: 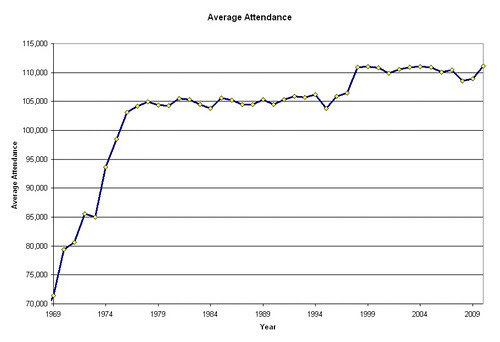 Honestly, they're only likely to get better this year, and it's not just due to the sheer wizardry of Denard Robinson. The official re-dedication of the stadium was exciting, but following that the other two games were against an FCS squad and a MAC school. Whatever the actual merits of the teams, historically they don't draw big crowds. Over the past couple seasons, an extra 2,136 fans have come out for Big Ten/Notre Dame games than games against other opponents. I fully expect next year's Ohio State game to crack 114,000, assuming the feat isn't accomplished against MSU next Saturday (and also assuming they don't re-number the benches before then). The 104.29% capacity from the 2003 edition of the Game translates to a crowd of 114,621 in the bigger Big House, and if both teams are as good as they could be next year, 115,000 isn't ridiculous.

I also expect the ND night game next season to be absolutely huge in terms of attendance. If we don't break 114k this season, we definitely will for ND next season.