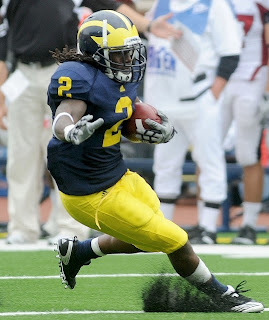 This is the space where I get to tell you what I think.  I made myself a couple of promises when I decided to start doing these.  First, I was never going to judge other people for their feelings.  Their experience is their experience, how they feel is based on how they take in the data before them and process it.  I do not need to agree with their feelings, nor do they need to agree with mine.  Second, I decided that I was going to try and be positive and forward looking, because the alternative just makes me something I don't like and something I cannot sustain for very long.

So maybe this is why Saturday's performance doesn't bother me.  It was a win.  The gap between "survives upset bid" or "gets a scare from an FCS school" and losing is a chasm visible from space.  We've been on the other side of that chasm, or perhaps more accurately at the bottom of it.  Michigan won on a day when they didn't play well.  That genuinely may not happen for the rest of the season.  Why would this bother us?  It's because college football has an amazing propensity to be unable to allow people to live in the moment.  The future and the past are always eminently more important in college football, as exemplified by "recruiting" and "tradition".  We cannot enjoy a win because of worries like "What does this say to recruits?" and "How does this fit in to the Michigan tradition?"  We're fixated on the two end points because we do not like the middle, the place we are standing right now.  It saddens me because it's hard to appreciate the moment when you're in it.  So allow me to try.
On Saturday, I saw some amazing things at a game that was just one of many that day.  I saw a marching band put on an exceptional performance in a circumstance of whose difficulty and emotional toll I cannot even begin to fathom.  I saw a tribute to a Michigan man that was so perfect for him because it didn't try to recast him as a saint, but simply as a fantastic athlete who genuinely cared about where he came from and being a part of the fabric of that.  I saw a sophomore quarterback throw an interception and shake it off to have a really remarkable day, including a couple of deep balls that are among the prettiest I've seen.  I saw a receiver get to show off his new field vision and some of the promise he's long been purported to have.  I saw a pair of running backs find holes, drag guys, and gain yardage.  I saw Vincent Smith cut so hard on the wet turf that the rubber pellets in the field turf made a little cloud under his feet.  I saw a team with flaws but flaws that can be worked on.  I saw a team with promise, but promise that needs work to be fulfilled.

I don't get to watch next week's game for the first time in seven years, family commitments.  I just hope the next 40 games find us happier, smarter, wiser, and more able to live in the moment.
Posted by Craig Barker at 9:07 AM

Email ThisBlogThis!Share to TwitterShare to FacebookShare to Pinterest
Labels: break even, column

I love this point: "It's because college football has an amazing propensity to be unable to allow people to live in the moment."

This is absolutely true. Great stuff.

Thank you both for the kind words. James, I must credit my friend (and Northwestern alum) James Quintong of ESPN.com for that essential thesis. He said it to me in a conversation about six years ago and it's stuck with me.