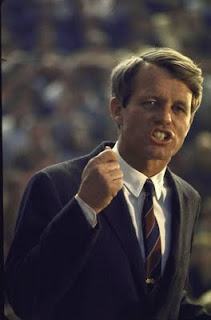 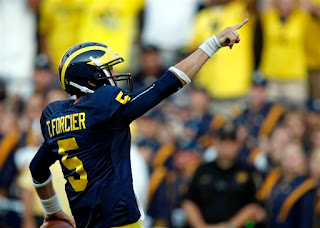 "Only those who dare to fail greatly can ever achieve greatly."

He is Bobby Kennedy. It kind of makes sense. He sort of has the aw shucks look about him and the hair, which belies the fact that he's as tough as nails. He's the guy who is standing in the front of the room in the moment of crisis screaming at a bunch of guys who are older and more experienced than he is simply telling them "I don't care how crazy, inadequate or stupid it sounds. Give it to me." He doesn't get nervous, because he's seen how his brothers did it, he learned from them, and he's made it his own. But mostly, it's because he represents promise and hope, at a time of turbulence when the people he is looking to lead need him the most, he is what the future may hold.

"All of us might wish at times that we lived in a more tranquil world, but we don't. And if our times are difficult and perplexing, so are they challenging and filled with opportunity."

As many of you know, I am an historian by trade, and I have always been fascinated with Robert Kennedy. I've read almost any book I could find on him, simply because I always feel like there is something there, something more interesting than JFK, someone at the focus of what the baby boom generation considers the most important moment in the history of the world. And while by no means is Michigan football comparable to the magnitude of world affairs in the Cold War, I couldn't help but be struck by the fact that Tate Forcier has a little bit of Robert Kennedy in him.

"People say I am ruthless. I am not ruthless. And if I find the man who is calling me ruthless, I shall destroy him."

RFK was seen by some as "...the brilliant one, the ruthless one, the guy everybody's afraid of." (to quote Stephen Culp's portrayal of him from Thirteen Days.) Tate Forcier has, in just two games at the University of Michigan, become a legend. He scrambles, he escapes, he makes mistakes, but he just manages to find a way. He's young, but he's learning, and if he is not seen as the heir to his blood brother who here leading us before, he is perhaps seen as the heir to his metaphorical brothers named Henne, Harbaugh, and Leach. But more importantly, he is not alone. He has Brandon Minor in the backfield with him, who is still the heart and soul of this offense. Look at this video and look at Minor whom the play is not being run through, blocking like his life depends on it. He has receivers, a array including Junior Hemingway, or LaTerryal Savoy, a career backup who made good yesterday (the drop was OK, in the Tyrone Butterfield variety. But Dave was right, if Savoy catches that ball, he enters the pantheon of players enshrined in the eternal Michigan highlight reel. As it stands, he still gets major credit for the play to get Michigan inside the five.) He has Darryl Stonum, who did it with the kick return (good grief, Michigan might actually have special teams once more!), and he has Kevin Koger, who has the potential to become a Michigan fan favorite simply by doing his job exactly as people expect him to do so. (The ultra competent possession tight end who can also block. And we thought that all of Michigan's offensive traditions were being foresaken?)

"It is not enough to understand, or to see clearly. The future will be shaped in the arena of human activity, by those willing to commit their minds and their bodies to the task."

There is still a lot of season left to go and there is still a lot of time for Tate to grow, to mature, to fulfill the hopes and dreams of what will be an ever growing crush of expectations and demands. But he is a piece, an important one, and we can only hope that he keeps moving forward.

(Images from AP and from Life Magazine)