(Two posts in one day!  We must be close to the start of the season.)

I don't officially think this qualifies as "breaking news", but I got the new M-Den catalog today and right there on the inside cover are the new adidas replica hockey jerseys (list price: $80) 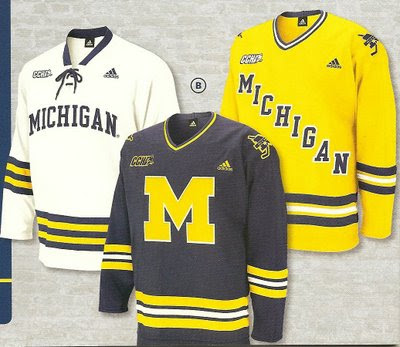 Interestingly, this inverts recent tradition of having the Block M on the home white jersey and the arched Michigan on the blue road.

The white looks like there is room to put a front number under the lettering. (Also, is it just me or is that a huge registered trademark symbol there?) The striping on this jersey does not match the other two, but also gives it the look of an older Michigan jersey, 1960s vintage, as we can see in following photo of Red from page 156 of Blue Ice (credited to the Bentley Historical Library). 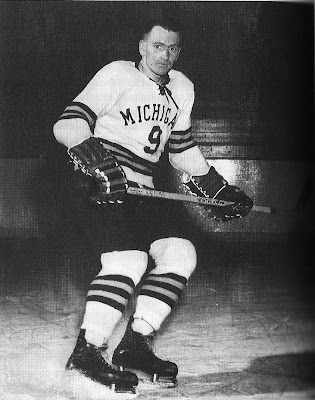 The navy road jersey looks nice, the white middle stripe seeming to be a little thinner than on their Nike predecessor.

The maize third looks relatively unchanged, (see photo of returning senior defenseman and captain to be Mark Mitera below) save the fact that of the authentic vs. replicas last year, the maize was the most distinctly different . 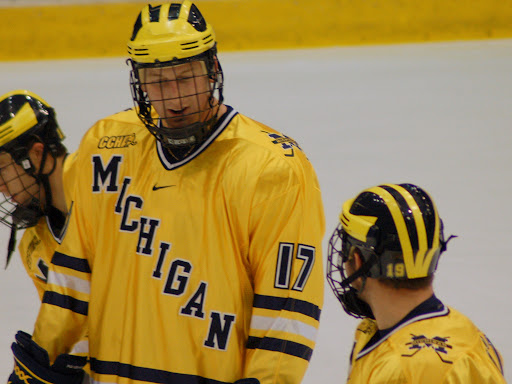 A few things we don't know yet, such as what font the names and numbers will be in as yet (last year using the Bears' number font and the Red Wings' lettering font) nor if the players will be wearing the "Dazzle Fabric" as they have the past few years.  We also do not know if adidas will be embossing the years of Michigan's nine NCAA titles on the inside shoulder and stitching a patch that says "Watch For Flying Pucks" into the interior hem.  All of this will come in due time.

All in all, no worries, it looks nice.
Posted by Craig Barker at 5:03 PM

whites and maize look nice - can do without the blue - block M could be a little smaller and it might help. Like the old time hockey eddie shore look though. Much better than I had feared. I was expecting a lot of diagonal striping and piping going every which way like the football roadies.

Good job by Red to keep things within the pale.