Look at Lord Autumnbottom over there 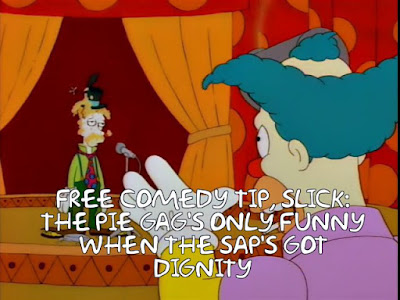 Pies in the face are only funny is the sap has dignity, but this, on the other hand, is only funny because the sap doesn't have dignity:

The man desperately striving for dignity and failing to achieve it is an American archetype. Willy Loman fantasizes about Uncle Ben. Fredo Corleone insists, indignantly, that he is smart. And much like Fredo, this year Michigan State is being passed over for its even younger brother (WMU).

Going for two when you know you're going to lose is football's version of saying "I'm smart and I want respect. As
Spencer Hall said about the Illinois game, there's something uniquely sad about scoring 8 points in a blowout loss, about having a permanent record that you thought you had a chance. In art, the striver can be a tragic figure, a sign of wasted potential or of the agony of living with a fundamental misunderstanding of how the world works. Football rarely goes for the kind of existential tragedy. It's just funny instead.

Oh, the Speightmeter was delayed this week. Speight is John Navarre this week in honor of the classic Lloydball second half. The offense tried for about 70% of the game, so 7/10 on the Speightmeter seems about right. The extremely conservative fourth-quarter offense may have been strategically sound, but I wonder if there was a little more to it. Out here is civilian-land, saying you took your foot out the gas might be considered an act of mercy, but I can't escape the feeling that for Jim Harbaugh, easing up at the end is the most contemptuous act he could ever imagine inflicting on an enemy. Being considered worthy of the effort necessary to get your butt kicked 78-0 is more dignified than that. 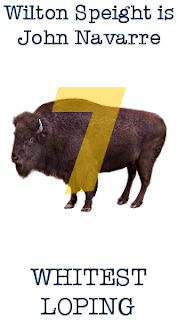