Fortunately, I was somewhat prepared for this contingency, as I had considered the possibility of the O'Korn-meter before the season, as August, much like now, was a time when Harbaugh was being very coy about who the starting QB is. So I had a system sketched out to rank the offense according to songs by Korn and their nü-metal compatriots. Fortunately we were reprieved from having to do that for 10 weeks!

My heart has, by Sunday night, convinced myself that the entire game was played in a blizzard and thus O'Korn's 7/16, 59-yard day was perfectly reasonable under the circumstances. My brain knows, however, that the first three quarters of that game was not played in a winter wonderland, and that Ohio State is going to require a much stronger QB performance. A kickass day from De'Veon Smith only goes so far.

The O'Korn-meter starts off at a 3. I think Trapt's "Headstrong" was the third-worst nü-metal hit, but I'm not going to listen to a bunch of nü-metal to find out for sure. 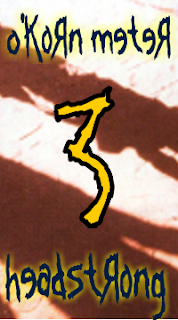