Normally, watching a football game involving Rutgers has a well-defined place on the priority list, and that place is at the bottom. So, upon hearing that Saturday's game would be at 4:00 PT and conflict with my arranged-far-in-advance dinner reservations, I expected that missing the late stages of a blowout would mean not missing anything important. Never again will I underestimate the Rutgers's ability to overwhelm with underperformance.

I stopped following the game to start dinner in that brief moment when it appeared Rutgers had more than zero points.

As for the offense: I reviewed the drive chart and realized I had almost forgotten that the first few drives...were not good. If we want to nitpick a 78-point performance (and Michigan Men always do), we can complain about using the wrong gloves and not needing a passing game.

But putting up the largest margin of victory since 1939 is a special occasion and should be noted accordingly. 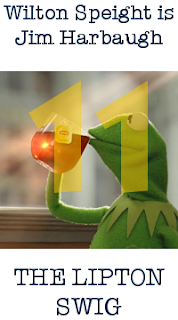 Rutgers can't even stop our third string and walk-ons, but that's none of my business. It's not my job to stop trying to score.