Scoring less than half the number of touchdowns that you scored in the previous game is rarely not a cause for concern, but dropping from 11 to 5 is hardly an issue for concern, especially when (1) Wilton Speight has worked his way back towards his early season accuracy, and (2) Kenny Allen hit a couple of field goals. Going into halftime 31-0 was more reassuring than going in up 35-0 would have been.

The most heartening events of this weekend weren't at the Big House - everywhere else in the Big Ten gave signs that the schedule already played was harder than Michigan made it look and the schedule to come is a little easier than we thought. Indiana lost to Northwestern. Iowa failed to have an offense yet again. Rutgers showed signs of being merely extremely bad instead of utterly incompetent. And Penn State beat Ohio State and is now "good" again, which means that Michigan beat a good team by 39 points.

Michigan State lost to Maryland. According to the rules of our Sparty, No! quiz, this counts as a Sparty No! game because MSU was up 17-14 at the start of the fourth and thus, technically, they blew a fourth-quarter lead. If win probabilities had been readily available four years ago we would have used them instead, as MSU only had, at most, a 55% chance of winning.

Of course, we never know what schemes Mark Dantonio has up his sleeves. Riley Bullough could have got himself ejected so he'd have extra rest for Saturday, we may never know.

The Speight Meter is at an 8 this week. Go win this pelt. 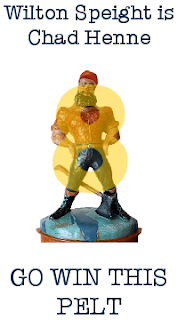