I'd start them young and make the whole thing goal-oriented: freshmen or sophomores can apply to the coaches for a Legend's number, and there's a set of things you must do in spring or fall practice to earn the right to wear it that exemplify the guy who set that number. For each I would also set list of accomplishments comparable to those of the Legend which if you achieve them in your career you earn the right to have your name added to that patch, for example Devin can get his name added to the 98 patch if he wins the Heisman and leads the nation in scoring, and Ryan would need to be a three-time All-American and two-time captain to have his name added to 47. Have a wall at the stadium somewhere that honors all of them and lists the accomplishments, and open it up a bit so there are easier numbers to attain (#7 for a QB who beats OSU three times as the starter, #46 for a QB who leads his team to an undefeated season and national championship, #77 for an OT who's a 4-year starter and two-time All-American, 60 for a DL who does the same, 76 for a guard).

Never one to let a good idea rest, we would like to humbly offer our Top 8 Legends Jerseys that should happen with the criteria needed to earn it.  (This will not be a slideshow, only because we have no idea how slideshows work.  We're like Unfrozen Caveman Lawyer when it comes to that part of the internet.)

7). Zoltan Mesko | #41| Michigan P 2006-2009
A punter must achieve any two of the following three items:
a). Average 42.5 yards per punt.
b). Succeed in your attempt to high kick the M Club banner.
c). Prove that you hold domain over an extraterrestrial empire.

6). Marcus Ray | #29 | Michigan S 1995-1998
A safety must achieve all of the following in one season:
a). Intercept at least five passes.
b). Make cover of Sports Illustrated destroying an Ohio State wide receiver.
c). Captain a team of Michigan football players that defeats a team from Michigan's quiz bowl program in an intramural game. 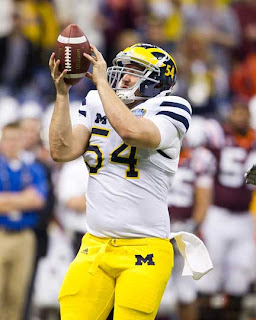 4). Jareth Glanda | #54 | Michigan LS 2010-2013
Move anonymously through two whole seasons of football without having your name mentioned, then catch a pass for a first down on a broken play during a bowl game. 
2). Nick Sheridan |#8 | Michigan QB 2006-2009
As a walk-on quarterback, successfully prevent Minnesota from taking three-year ownership of the Little Brown Jug by playing out of your mind.

#14. For being the scion of a conference opponent's legendary player and committing a notorious act of vandalism.

Here's a direct link to Shazor's hit if you don't want to watch six minutes of highlights: http://youtu.be/eNqHgW74LjA?t=6m58s