The best place to find someone for your college or university's Board of Regents is the Milford Academy of Newport Beach, California. Regents should be neither seen nor heard, not even by someone with the super-terrestrial visual and auditory capabilities of HOCKEYBEAR. The only way that good regents can be detected is by the steady stream of sizable alumni donations and the steady inability of the state to pass legislation cutting higher education funding.

Unfortunately, for many state schools, regents are chosen by election or by gubernatorial appointment, and a human does not get elected or appointed by being neither seen nor heard. (HOCKEYBEAR could identify some humans whose chances of getting elected would improve if they were neither seen nor heard if he had much interest in non-galactic politics.) These humans realize that their position as regent gives them power and yet do not realize that with great power comes with great responsibility. They could use radioactive spider bites.

In Summer 2012, HOCKEYBEAR was enraged to see the Board of Visitors of the University of Virginia abuse their authority and interfere with the academic leadership. While previous episodes of my Guide to Campus Destruction have involved fiery explosions, this week HOCKEYBEAR will destroy with subtlety, deviousness, and minimal property damage. The University of Virginia will receive my vengeance, served very, very cold! 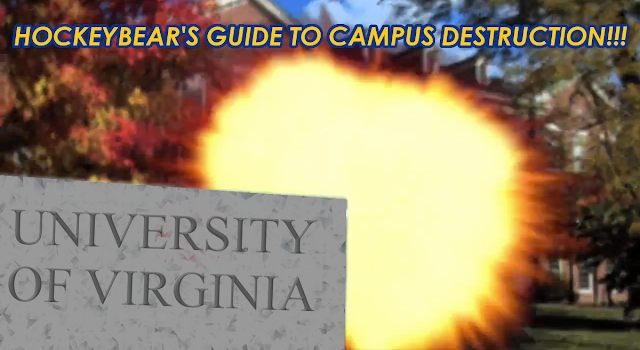 HOCKEYBEAR's stop is not Charlottesville, but instead Richmond, where I pay a visit to Virginia Governor Bob McDonnell. I demand that he obtain the resignations of all of UVa's Visitors with the threat that most terrifies a Virginia Republican: if he fails to do so, HOCKEYBEAR will raze rights-of-way for high speed rail from Washington to Virginia Beach and for modern metro lines in Northern Virginia. Having obtained these resignations, I present McDonnell with my own carefully-curated list of nominees for the Board of Visitors. Once they are ensconced in their new positions, I can return to Alaska and leave the University of Virginia to collapse under the weight of their incompetence.

And who does HOCKEYBEAR choose to carry out his plan of destruction? Only the greediest, most incompetent, and most milquetoast people imaginable.

David Barton: Who better to ruin Jefferson's university than the so-called "scholar" who thinks that Thomas Jefferson was a far-right, evangelical Christian? David Barton's understanding of the Founding Fathers and the Constitution is so bass-ackwards that I could probably convince him that the Second Amendment's "right to bear arms" is referring specifically to HOCKEYBEAR. (That's not correct. The right to bear arms refers to all polar bears.)

Charles M. Burns: Charles Burns held a chair at Springfield University, and his abuse of power there resulted in horrendous consequences there. As a result of him overruling the admissions board and admitting an unqualified student, his university suffered severe consequences, including:
Similar abuses of power at UVa should result in numerous lawsuits tarnishing the university beyond repair.

Jennifer Granholm: The ex-governor of Michigan would likely not be seeking additional political power and would probably be a perfectly fine Visitor. That's why HOCKEYBEAR fired up his time machine, went back to 1978, and got the 19-year-old version instead.


Al Groh: With an all-time 36-36 conference record while coaching Virginia's foot-ball team, Mr. Groh epitomizes the mediocrity for which the new Board of Visitors will strive.

Dan Snyder: Dan Snyder's business acumen in the Midatlantic region is unmatched. Based on his prior dealings, we can expect him to force Larry Sabato into retirement to clear a spot on the faculty for Pepper Rodgers, charge $100 for parking at foot-ball games while simultaneously convincing Charlottesville City and Albemarle County to prohibit street parking, and market a special line of UVa extra-long twin mattresses. All of these actions will be justified as bringing in a positive return of investment. None of them actually will.

Anthony Weiner: HOCKEYBEAR has noticed that, far too often in human society, there are prominent, seemingly upstanding, members of society who are secretly sending pictures of their "members of society" to co-eds. These people can be identified by their use of the term "co-ed" to refer to a female student. Appointing Anthony Weiner to the Board of Visitors should keep the lawsuits flowing in and the money flowing out of the university.

Byron "Buster" Bluth: Although he is a Milford Man, young Byron Bluth would be a truly incompetent Visitor. Why? Take a look at this picture:
Those people in the background were not members of the University of Chicago sleep lab in 2003! When you're an intergalactic marauding force like HOCKEYBEAR, you need to keep up on sleep research so you can destroy as much as possible while people are still asleep.

Led by this new and most definitely not improved Board of Visitors, the University of Virginia will slowly fade into mediocrity and irrelevance. Their only hope will be to establish a Division I hockey program, as this is the only action that could possibly convince HOCKEYBEAR to return and reverse the destruction he has so carefully wrought.

Next time: HOCKEYBEAR sings along to "The Bleeding Heart Show" while surgically amputating the University of Phoenix from the body of post-secondary education.
Posted by HOCKEYBEAR at 7:08 PM