HOCKEYBEAR's Guide to Campus Destruction II: The University of Georgia

HOCKEYBEAR was very sad to hear that my old pal Neil Armstrong died recently. I was on the committee of space-faring species that welcomed him to the moon, along with Flipper, Lassie, and Mr. Ed. That's the part of the moon landing that the government tries so hard to keep hushed up. What HOCKEYBEAR found really confusing was how the news media reported on the death of a human hero. The Anchorage Daily News had the headline "Neil Armstrong, first man to walk on moon, dies at 82." CNN had a video report called "Armstrong, first man on moon, dies." HOCKEYBEAR thinks there are three types of humans who do not know why Neil Armstrong is famous: 1) those who are too young and thus unlikely to purchase newspapers or cable; 2) those so unfortunate that they did not receive a proper education and thus likely to also be too unfortunate to afford a newspaper; and 3) those too stupid to know who he is and who are unlikely to be interested in keeping up with the news. HOCKEYBEAR's point is YOU DO NOT HAVE TO EXPLAIN WHO NEIL ARMSTRONG IS. Every human interested in paying for the news knows who he is!

Most humans agree that the prominent national media has grown quite complacent. HOCKEYBEAR sees this in the reports on the foot-ball game where the small humans of Michigan were defeated by the less-small humans of Alabama. ESPN's Gene Wojciechowski, by no means the most odious "reporter" at that network, filed a story about how the less-small humans of Alabama "played with a purpose" and were "hungry" to win. HOCKEYBEAR has no doubt that this is true, but I also have no doubt that the small humans of Michigan "played with a purpose" and were "hungry" to win. That is not news, only meaningless cliché. HOCKEYBEAR is not impressed.
Meanwhile, the student reporters at The Michigan Daily were ready with two separate analyses dissecting the foot-ball strategies and execution that resulted in the defeat of their small humans. Unlike reporters at big media outlets, who are relatively secure in their jobs and can afford to be lazy, student reporters are fighting to make names for themselves and these days are producing better reporting than the "professional" media. HOCKEYBEAR is, of course, most interested in hockey than foot-ball, and notes that Matt Slovin of The Daily produced the most important hockey journalism of 2012 by reporting on the UNHOCKEYBEARLIKE shenanigans of the Kitchener Rangers. The newspaper has since "clarified" that story by apologizing that it did not include facts that were not known at the time the story was published and would not have come out in the open if the story had not been published. HOCKEYBEAR is happy to see that steps are now being taken to cut down on cheating in the OHL, even if my favorite OHL team, the Windsor Spitfires, were punished. None of these steps would have happened without student journalism.

Last time I demonstrated a fairly standard campus destruction on North Campus. In columns to follow, I will show you subtler ways to destroy a campus. To show you how destroying independent student journalism can make destroying a campus much easier, The University of Georgia will tremble beneath my rage! 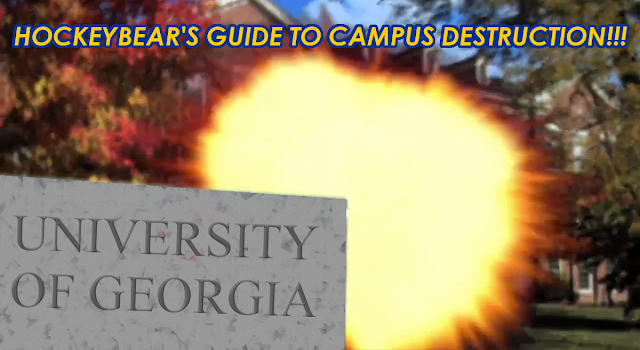 HOCKEYBEAR lands under cover of darkness at Athens-Ben Epps airport, having switched my trusty F-16 for a bomber for this mission. Stealthily crossing the Athens Perimeter and fording the North Oconee River, I make my way to Baxter Street and enter the headquarters of the Red & Black. With mere threats of rampage, HOCKEYBEAR assumes the title of Publisher. In my first act as Publisher, I issue the following memo:

More of:
- Clear photos that enable HOCKEYBEAR to see the target.

- Pictures of our victims, with the name if possible. Set objectives, ie. Have 10+ in each paper.

- Storeys/Hooks. Maximize the number of hooks on the sides of buildings so that HOCKEYBEAR can rappel up and destroy the top storeys first. Have weather above the fold so HOCKEYBEAR can prepare for adverse conditions.

- Content that invites our readers to respond, send photos, comment, engage with HOCKEYBEAR - Have them beg HOCKEYBEAR to spare their buildings.

A balance of good and bad:
GOOD
- Content that is ABOUT our audience doing something unique, helpful, outstanding, new, dramatic, ie drawing up a master plan for the replacement campus.
- Content that our readers have asked for, ie. how to file property insurance claims, how to find the nearest FEMA trailers, where to find a reconstruction job, what's new. We have a list to start. Build the list by talking to the survivors.

BAD
- Content that catches people or bears doing bad things. I guess this is "journalism." Don't write "HOCKEYBEAR starts off semester by destroying campus." Instead write "HOCKEYBEAR pays tribute to local music scene by causing Widespread Panic with a B-52." Also note how HOCKEYBEAR spared Joseph E. Brown Hall, built a Gay/Straight Alliance Center on top of the ruins of the Tate Student Center Chick-Fil-A, and hired a xenoveterinarian to permanently heal Uga's respiratory problems.

If in question, have more GOOD than BAD. People have to move on after a HOCKEYBEAR rampage.

- Sarcastic comments directed at our audience in non-opinion sections, ie "It's a good thing that Lilly Pulitzer dresses are so good as camouflaging the dust, dirt, and debris stains caused by HOCKEYBEAR's rampage..." We wouldn't say that Kodiak bears are too weak to fend off a simple Pitbull invasion. Or that it's been a grizzly-furred week at the grizzly bear conference. Stop this now.

- Obscenity. If we can't edit police/military reports that have obscenities, then don't run the report. This will prevent news of HOCKEYBEAR's rampage from spreading widely, as destruction of that scale always inspires at least one F-word.

We will strive to eliminate:

- Stories, especially on the front page, that are on topics that are clearly of limited interest to our audience, ie. what life was like before HOCKEYBEAR arrived.

- Content that is not understandable to the majority of our audience, ie. blog posts that make no sense.

- One sided coverage without a documented attempt to tell the other side. While the typical member of our audience will have negative feelings about HOCKEYBEAR's destruction of campus, there will be some who are pro-campus destruction. Find them, even if you have to call up to Atlanta or down to Gainesville.

Next time: HOCKEYBEAR takes a Visit to the University of Virginia.

HOCKEYBEAR is a renowned primeval force of destruction known for his appearances in University of Alaska hockey intro videos. When not traveling across the galaxy destroying planets and stars, he lives in Fairbanks and supports his hometown Nanooks. You can follow HOCKEYBEAR's satirical path of destruction and links to cute polar bear videos on Twitter at @AKhockeybear. You can nominate campuses for destruction by messaging HOCKEYBEAR on Twitter too!
Posted by HOCKEYBEAR at 7:00 PM