The Michigan hockey team plays Notre Dame at the Palace of Auburn Hills this weekend. As The Blog That Yost Built pointed out when the schedule was released, Notre Dame may be getting exposure in a new market, but it may not be worth it to give up their only home date against Michigan for what amounts to a road game less than an hour from Michigan's campus.

Well, it seems that they're trying to reclaim the environment. While it's naturally going to be a heavy Michigan crowd, one staple of weekends at Yost will be conspicuously absent: The Michigan hockey pep band will not be in attendance. 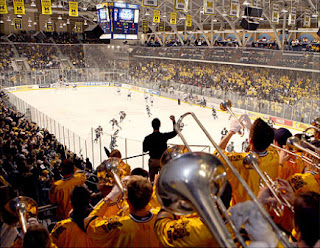 This is not due to conflicts or crowds. It is because Notre Dame is excluding them from attending. The hockey team liason explained to the band that "it is ND's home game and they did not want to allow [them] to travel." The band contacted the CCHA and learned that there is no official policy on home games played at neutral sites, but they would bring up this issue at league meetings this year. Red Berenson and the team told the MMB staff that the band's presence would "greatly improve the environment," and that their hands are tied.

Incredible that this is deliberate. But band-related conflicts are not without precedent between these schools. The Notre Dame marching band has twice made problems for themselves when traveling to Michigan in the past. Michigan's long-standing policy of capping opposing bands groups at 330 members somehow became an obstacle for Notre Dame who was unwilling to write drill for a smaller group in advance. Ultimately, they complained publicly but still came without incident. And I think they came to Michigan this year too, though I don't remember hearing their fight song when they scored.

I don't mean to suggest this is a retaliatory snub -- if they wanted to inconvenience the MMB they could've done so at the games in 2004 or 2006 -- just wanted to note that similar things have happened before.

The Victors and the Notre Dame Victory March are unanimously revered among the top fight songs in the country and almost always appear #1 and #2 in pundits' lists. It is unfortunate that this attempt at neutralizing the Michigan faithful comes at the expense of some of the greatest traditions in college athletics, and not by circumstance, but by choice.

Update: Notre Dame will indeed have its pep band there Saturday. The associate athletic director responded to an e-mail explicitly stating that since the Michigan band played at its home game on Friday, that "in turn, the Notre Dame band will perform at its home game on Saturday." He said that during CCHA play, visiting teams' pep bands do not perform at Yost Ice Arena, and we should not expect Notre Dame to host a visiting band, since that is not customary in college hockey.

He neglects to account for CCHA regular season games played at neutral sites, such as the annual Michigan-MSU hockey game at Joe Louis Arena, where both bands are present. And when LSSU played one of its home games at Joe Louis, rotating Michigan and Michigan State as opponents, both visiting teams' bands went. There's even a precedent for CCHA regular season games played at non-hockey venues: The Cold War.

To which Michigan sent a band.

Email ThisBlogThis!Share to TwitterShare to FacebookShare to Pinterest
Labels: flip folders, focus on the bands, hockey, i should probably let this go, Notre Dame, photos from mgoblue, provocation, sadness

Do we know whether Notre Dame is bringing their pep band? If they aren't, it would be lame, but I would understand not wanting to put yourself further in a hole.

FWIW, this post is already on the first page when you Google "notre dame hockey band".

Yep. I updated the post with their reasoning, which I feel is BS.

Yep, we're all pretty disappointed at this one.

If it were up to me, we'd go anyway. We already had the logistics set up to make the trip, it's been on the schedule since August, and now they decide to drop it on us?

Lame. Very, very lame. This game is not in their arena. They made the decision to play their HOME GAME in MICHIGAN. What are they afraid of?

Did you know that Ann Arbor public schools teaches fifth graders to play instruments, and at least the woodwinds and percussion can play The Victors fairly well by now? I say bus in a bunch of middle school kids and have a spontaneous pep band break out!

"And I think they came to Michigan this year too, though I don't remember hearing their fight song when they scored."