Here For You, To Cheer For You

Last week, a trombone player in the MMB collapsed on the practice field in the middle of the pregame rehearsal. Students rushed to his aid and ultimately had to perform CPR while waiting for the ambulance to arrive. It's not fair to describe this secondhand when there are so many primary sources out there, so here's Lydia's take:

Practice halted; the directors flew down from the tower, a cluster of students, mostly ones in the nursing program I think, grouped around him. We all stepped back. We all waited. We watched, as much as we felt we shouldn't look, because we wanted to know what had happened. What went wrong? What was going on? Would he be okay? Oh God, just let him be okay.

At first he was placed in the cardiac intensive care unit on the 7th floor under sedation and on a ventilator to maintain an airway. They kept him unconscious overnight to perform tests because they still had no idea why this happened. The first tests didn't show any reason why either, but he continued to improve and eventually weaned himself off the sedatives and no longer needed a tube.

In addition to the dozens of visitors, he also received a card. The Phi Mu Alpha brothers who coordinated that and sent updates included the text of the card:

You're in our prayers... get better soon. We need you! Go Blue!

On the opposite page of the card were personal messages from Mike Hart, Jake Long and Shawn Crable.

(Whether or not they realized it, they do need him; he's the second chair trombonist.)

But the doctors weren't done with him yet, and he had to get chest x-rays, CT scans, and MRIs of his brain. Eventually he transferred out of the cardiac ICU, and seemed to improve every hour of the day. On Friday he remembered that we beat Notre Dame. By Saturday he was back to his normal self and walking around the hospital floor. He had a defibrillator implanted in his chest and could be back to school by tomorrow.

The sustained outpouring of support has been incredible. 50 people came to visit in the first two days. The nurses had to ask his family for suggestions how to manage all his traffic. People say that the band, like many great tight-knit organizations, becomes a second family. The support that Nick has should erase any doubt.

This has been a stressful and scary time for Nick and his family. Being in the hospital for so long seems to have its perks though: Rest. Recovery. And if you're lucky like Nick was, Lloyd Carr will come visit you the evening before a big game. 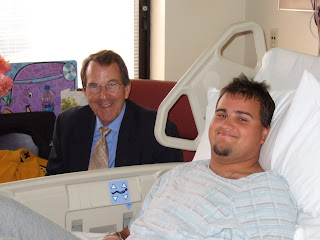 Nick will return, in whatever capacity the doctors allow, as soon as he can. Here's wishing for a continued speedy recovery.

Thoughts and prayers with you, and my hopes for a speedy recovery. And to everyone who proved once again that Leaders and Best is not just a slogan, but a way of life, thank you for reminding us all what a Michigan man can and should be.

I almost cried reading what Lydia said. Most of the time, I was doing well until I remembered that he could have died that day on the field... had CPR not been done perfectly, had the ambulance not arrived... we would be less one great person. We are truly part of the Michigan family and directly affected by the Michigan difference. Thanks Jeremy.

Whoa. That's got to be a scary, scary thing to happen on-field. Thank Prime that things ended up turning out okay. Make sure that boy has his share at Prog, whatever he's drinking. He's earned plenty of nerve-calming shots.

That's the great thing about the Michigan Marching Band - we're made up of everyone from everywhere, and we care about each other. In this case, it saved his life. Keep us posted.