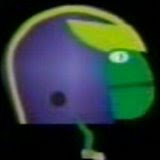 As some of you may know, this past weekend, I pulled off the rare football trifecta, watching a high school game on Friday night at my alma mater, Saturday was the Michigan/Notre Dame game and Sunday, I went to Ford Field for the Lions/Vikings game. Three games, three wins. A pretty neat circumstance. As we were walking out of the game, I snarkily noted "Lions 2-0, Michigan State 3-0, Michigan 1-2. We are in the end times gentlemen."

And that is when my friend Mike stated the following premise (essentially):

"Each year, there's a pile of 20 wins and Michigan, Michigan State, and the Lions divvy them up between them."

(and for the purposes of this, I did not count ties as half wins. They were ignored.)

The results after the jump...

The bold number is the highest win total for the year. 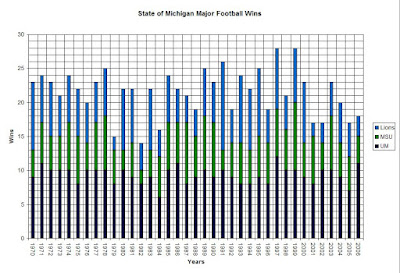 So what did we learn? Well, actually it's that there's a pile of 21 or so wins available and the teams seem to divvy them up amongst themselves. So Mike was very close to being right without any significant research, just off the top of his head.

Outliers: 1982: the NFL Strike Year, which cost the Lions seven chances to win. Presuming that they went 4-5 in the 9 games, an extrapolated 7-9 would bring that up to 17, which would be almost right there. Still a bad year.

1984: But if you're going to have a set of collective bad years in Detroit, that would be the year to do it.

1991: Mike's initial premise buster as stated to me isn't actually that far off because of how bad Michigan State was.

1999: Michigan goes to the Orange Bowl, Lions amazingly make playoffs post-Sanders retirement, and Saban gets his season to get him lured to LSU.

And, as Geoff pointed out to me in writing this up, Michigan is responsible for roughly 9 of those wins a year, leaving MSU and the Lions to fight over the other 12 between them.

Conclusions: Well, sir, the data support no conclusions as yet. The absence of activity in the Pacific suggests this could be just an exercise. But when you look at how often Michigan has carried the banner, it is amazing considering that the Lions have three more chances a year for most of those years, if not four. Let's hope that this year is the good kind of 1999 style outlier and everyone ends up happy (maybe flip the result of the Michigan/Michigan State game that year, just to be safe).

Email ThisBlogThis!Share to TwitterShare to FacebookShare to Pinterest
Labels: keep your Lions off my Michigan, mathman, square one, state of Michigan

You really should incorporate the wins by the Panthers in 1983 (12) and 1984 (10). Maybe somehow normalize your results to account for the 18 additional "available wins" in those two years.