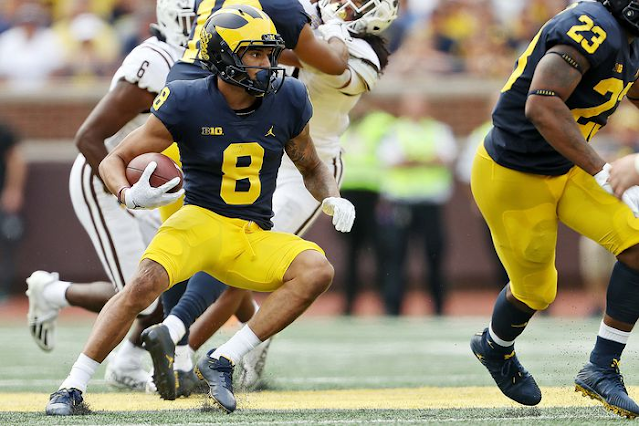 I think it's the small moments that get you, the ones you thought you saw coming but they hit you in an unexpected way.  This week, plus four days, marks the 25th anniversary of my first Michigan game as a student, a weird, but fun 20-8 Michigan scorigami (still) win over Illinois in the dying August heat of Michigan Stadium.  Though I had been to the Big House before, there was a sense of culmination, that everything I had wanted up to that point in my life had been validated.  Not by getting into Michigan, not by moving into my dorm room in Bursley, but sitting in the student section for an actual game on my 18th birthday.  Those feelings seem perhaps naïve and misguided in retrospect and with the benefit of lived experience, but they were genuine then.  I chose to wear my recently acquired from eBay Jarrett Irons #37 home jersey to the game today, because it felt right, honoring a true Michigan great who just happened to graduate right before being able to be part of a team that went down in history.

There was a whole long section here, written in the vein of other very good recent season openers, that dealt with what we have lost, what we're missing, the challenges therein.  I felt that deeply and I hope that perhaps in getting my thoughts down on paper, I would be able to sort them all out.  While what I said was good and somewhat cathartic to me, it also doesn't need to be shared, because it doesn't really solve anything for me.  But I appreciate and respect the friends and writers who have been putting those feelings out there and the folks who have been reading and seeing themselves in those pieces.  But that is a piece that should have rolled out when 2021 was still an unknown.  We have limited data now; we can't stare into the shapeless abyss any longer.

This game, this opener, doesn't really solve anything.  And you know what, that's OK.  Because it doesn't need to solve anything.  It is preferable when Michigan looks like it knows what it's doing against a G5 school, the hand-wringing can wait for another week, that's nice.  There were big plays on offense by players that the collective us were hoping would be there.  There was Ronnie Bell with a big score followed by a visit with the men's basketball team in the end zone, a play that came after a ridiculous catch that was wiped out by an OPI call so questionable Bell should be allowed to file a defamation lawsuit against it.  (Our best to Ronnie Bell and hoping for good injury news, but not expecting it.)  There was Blake Corum, on a swing pass, on a kickoff return, on yard after yard after initial contact, being the muscleball we knew he could be.  There was Hassan Haskins just running in that punishing style of his.  There was AJ Henning, getting one touch but making the most of it.  There was Cade McNamara, playing within himself, but 9/11 for 136 and 2 TDs when they didn't really need him to do more.  There was JJ McCarthy, 4/6 but making absolutely absurd throw across the hypotenuse of the field to find Daylen Baldwin for a very nice touchdown to put Michigan up by 40.  These things felt good for players who labored in an uncertain silence last season, to hear the roar of approval from the Big House crowd.

We know all too well the dangers of reading too much into one game of a season, but let's not worry about what this portends, good or ill.  Let's not worry about where this will fit in the historical context of Michigan history, as the 1,349th game of Michigan football.  Let's not fret about next week, that's for the coaches and the players to handle, and they will.  For this moment, for this one moment, let's savor being back in the Big House, watching a team of players who love Michigan as much as we do, play with the vigor and enthusiasm that one hopes for.  The story of the season will be written in time.  It will unfold, page by page, and it will be inked indelibly in the record by January at the latest.  College football lives too often in the past and in the future to truly enjoy the present.  Let's resolve to do that, if just for this one week.  We can go back to being who we are next week, heck, probably by Monday, maybe Tuesday because of the holiday.  But for now, enjoy it, relish it, it's the kind of feeling we long for during the long months of the off-season.